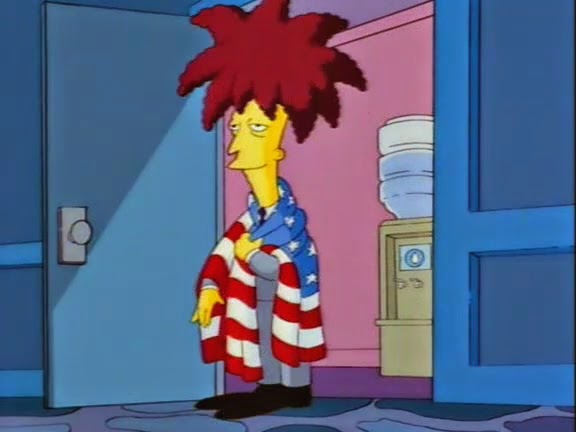 Or the One Where
Sideshow Bob runs for mayor.

The Setup
After calling in to a conservative radio show, a groundswell of public outcry leads to Sideshow Bob being released from prison and set against Mayor Quimby in the mayoral election.

Notable Notes
This episode contains the first usage of the word "meh" on the show, which has since been added to some dictionaries and become ubiquitous all over the internet.

This was also the first episode of the series to feature no chalkboard or couch gag; after the show's title flashes on the screen, we zoom right into the episode, a technique that would be used in greater frequency in later years.

Oddly enough, in Lisa's rundown of Sideshow Bob's greatest hits to Homer, she leaves out the time the family had to enter Witness Protection because of him, after which Bob stepped on a ton of rakes and nearly killed Bart on their houseboat.

This episode also gives us another fairly overt hint at Smither's sexuality, as he turns whistleblower in the face of the Bob's opposition to his particular "lifestyle".

Obviously, there's a ton of references in this one. Birch Barlow, the conservative pundit who orchestrates Bob's release and later his mayoral bid, is a thinly-veiled Rush Limbaugh (who was arguably at the height of his power when this episode aired) analog, while much of the second act is inspired by Watergate and specifically All the President's Men. The Bob/Quimby debate recalls the Nixon/Kennedy debate in 1960. The title comes from the 1992 film Bob Roberts and Bob's victory cackle in front a large picture of himself is another homage to Citizen Kane. Finally, much of the episode's climax, involving Bart & Lisa questioning Bob and Bob's subsequent rant/villain monologue is inspired by A Few Good Men. There's more, but those are the big ones. 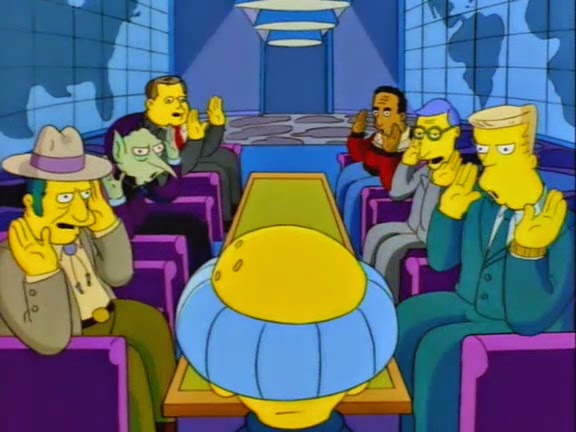 Quotable Quotes
Sideshow Bob: That was a big mistake, Bart. No children have ever meddled with the Republican Party and lived to tell about it.

Barlow: Sideshow Bob, Councilman Les Wynan says that you're not experienced enough to be mayor. Sir, what do you have to say about that?
Bob: I'd say that Les Wynan ought to do more thinking and less whining!
Lisa: There's no councilman Les Wynan.
Bart: Good line, though.

Homer: Hmm...I don't agree with his Bart-killing policy, but I do approve of his Selma-killing policy.
Krusty: Well, he framed me for armed robbery, but man, I'm aching for that upper-class tax cut.

Librarian: Here you go: the results of last month's mayor election. All 48,000 voters and who each one of them voted for.
Lisa: I thought this was a secret ballot?
Librarian: Meh.

Bart: We want the truth!
Bob: You want the truth? You can't handle the truth. No truth-handler, you. Bah! I deride your truth-handling abilities.
Judge: Will you get to the point?
Bob: Only I could have executed such a masterpiece of electoral fraud. And I have the records to prove it! Here, just look at these,  each one a work of Machiavellian art.
Judge: But why?
Bob: Because you need me, Springfield. Your guilty conscience may force you to vote Democratic, but deep down inside you secretly long for a cold-hearted Republican to lower taxes, brutalize criminals, and rule you like a king. That's why I did this: to protect you from yourselves. Now if you'll excuse me, I have a city to run.
Judge: Bailiffs, place the mayor under arrest.
Bob: What? Oh yes, all that stuff I did. 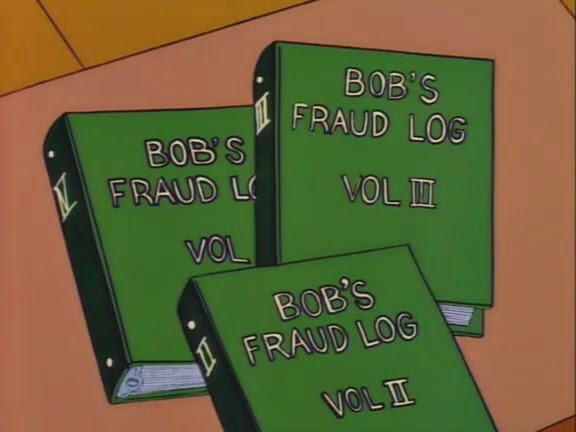 Teebore's Take
In addition to being one of The Simpsons' most overt and pointed critiques of the media's role in politics and how easily swayed the public is when it comes to elections, this is also the second or third best Sideshow Bob episode of all time (I go back and forth between this one and "Brother From Another Series" for the #2 spot after "Cape Feare"). For his fourth outing, Bob wisely expands his agenda beyond revenge on Bart (though he does experience his fair share of glee at demolishing Bart's house to make room for the Matlock Expressway), a tactic that will be repeated in future Sideshow Bob outings, even while his particular hatred for Bart (and to a lesser extent, Lisa) remains. It's a smart move that makes the character usable in a larger number of stories while also giving those stories a greater impact because Sideshow Bob is in them. This story, for example, wouldn't have nearly the impact had Bob's role been filled by a new character created for the episode. But casting a character whose crimes are specific to this show and has a connection to one of the title characters helps underscore just how ridiculous his rise to power is, thus further selling the satire of the public even taking him seriously as a candidate in the first place.

One of the all time great Sideshow Bob episodes that opens up the character to all kinds of new storytelling possibilities. 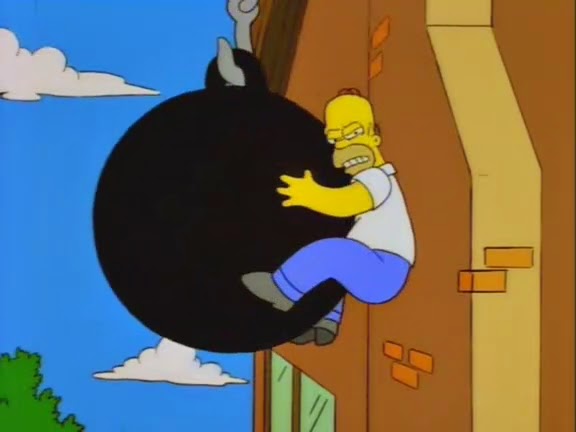