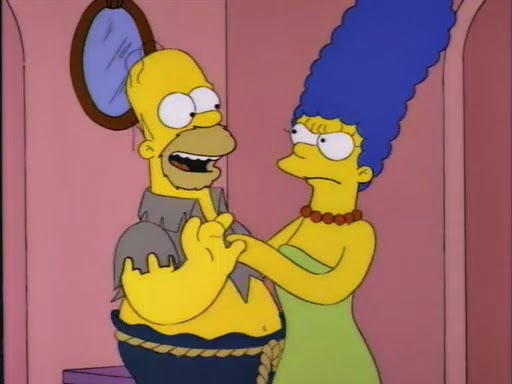 Or the One Where
Marge kicks Homer out after he shares intimate secrets about their relationship.

The Setup
Realizing that his family and friends consider him dumb, Homer decides to enroll in an adult education class, but ends up teaching one on marriage instead.

Notable Notes
This is the second episode Greg Daniels wrote for the show, and it was built around the idea of Daniels trying to come up with something Homer could be really good at it (being a husband).

One of the secrets Homer tells his class is that Marge dyes her hair, and is, at this point, naturally gray. Though seemingly a throwaway bit like so many others, later writers will remember this fact and occasionally reference it, even building the plot of an episode ("The Blue and the Gray") around it.

This episode also establishes Moe's infatuation with Marge, another minor bit that will get some play in future episodes, though it usually has a hard time walking the line between "funny" and "creepy".

If you play Tapped Out, this is the episode the Adult Education Annex comes from.

This is obviously the final episode of season five. I'll be back, continuing on with retro reviews of season six, after taking a few weeks off (mainly to build up a bit of a stockpile of posts for when I'm hideously sleep-deprived and mentally-deficient around the first of the year). 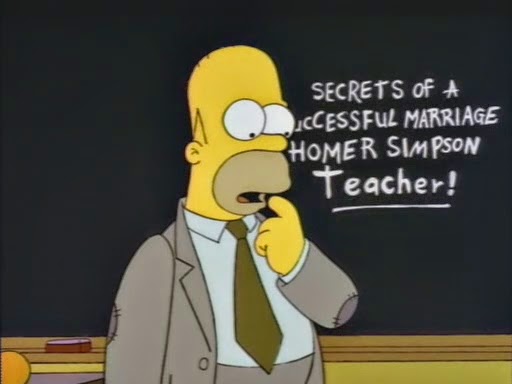 Quotable Quotes
Marge: Oh, Homey, if you feel so bad about yourself, there's always things you can do to feel better.
Homer: Take another bath in malt liquor?
Marge: There's that...or you could take an adult education course.
Homer: Oh, and how is "education" supposed to make me feel smarter? Besides, every time I learn something new, it pushes some old stuff out of my brain. Remember when I took that home wine-making course and I forgot how to drive?
Marge: That's because you were drunk!
Homer: And how...

Lisa: I think it's great you're a teacher, Dad. So, will you be lecturing from a standardized text or using the more socratic  method of interactive class participation?
Homer: ...yes, Lisa. Daddy's a teacher

Marge: Homer, I really don't like you telling personal secrets in your class.
Homer: Marge, I didn't tell 'em personal stuff.
Marge: Today at the Kwik-E-Mart everybody knew I dyed my hair!
Homer: Oh, you mean about you. All right, maybe I said some things, some personal things.  But you should have seen them, Marge: they really wanted to hear what I had to say --
Marge: Mmm, I'm happy about that.  But I think you can be a good teacher and still respect our privacy.
Homer: Look, Marge, you don't know what it's like. I'm the one out there every day putting his ass on the line.  And I'm not out of order! You're out of order. The whole freaking system is out of order.  You want the truth? You want the truth?! You can't handle the truth! 'Cause when you reach over and put your hand into a pile of goo that was your best friend's face, you'll know what to do! Forget it, Marge, it's Chinatown.

Moe: Tell us more about you and Marge!
Homer: This is a place of learning, not a house of...hearing about things.

Homer: Oh, good.  Reverend Lovejoy will make Marge take me back! He has to push the sanctity of marriage, or his God will punish him!
Reverend Lovejoy: Get a divorce.
Mrs. Lovejoy: Mmm hm.
Marge: But isn't that a sin?
Reverend Lovejoy: Marge, everything is a sin. You ever sat down and read this thing? Technically, we're not allowed to go to the bathroom. 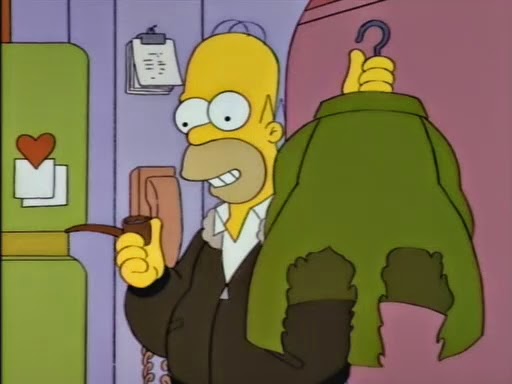 Teebore's Take
Hardly the first such episode, even "only" five seasons in, I always think of this as the last great Homer/Marge relationship episode. That's not entirely true, of course; "Natural Born Kissers" is pretty great, and the insanity pepper episode is a Homer/Marge story (though of course that understandably gets overshadowed a bit in people's memory by other things), to name just a few. But most of the ensuing Homer/Marge episodes which succeed do so by building on or tweaking the standard format, whereas the ones that just run with the "Homer does something stupid, Marge gets mad, Homer wins her back" template pretty much all suffer in comparison to this episode.

Partially because this one is, of course, really funny, but also because it's written like it's meant to be the last word on the subject. At the time, that may very well have been the intent (with the writers at the time assuming the show couldn't possibly be on that much longer, right?). After twenty-five plus seasons, though, it's understandable that future episodes returned to the "examine Homer and Marge's relationship" well, but without somehow tweaking that template, it's tough to beat this one.

One of the show's all time great seasons (if not the greatest) comes to a close with another classic, the last truly great Homer/Marge relationship episode. 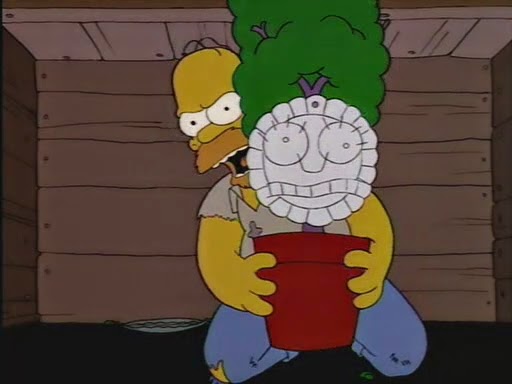