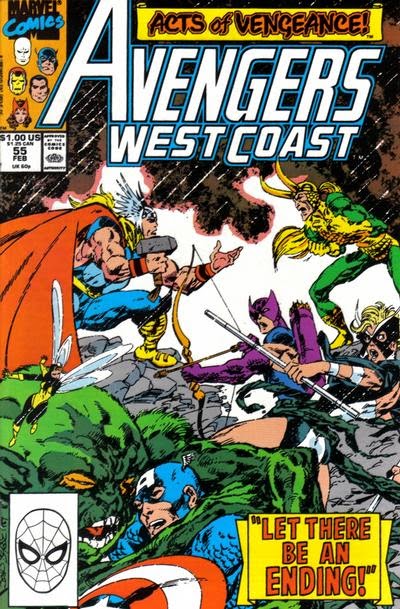 In a Nutshell
Loki is defeated and the Avengers deal with the fallout of "Acts of Vengeance".

Plot
Captain America #367: Magneto confronts Red Skull at his Washington DC office, chasing him through a series of tunnels, dispatching obstacles along the way. Eventually, Magneto catches and imprisons Red Skull in an underground fallout shelter, leaving him alone in the dark, with nothing but water, to think of the horrors he's perpatrated, to suffer such that he'll wish Magneto had killed him. Avengers West Coast #55: Both teams of Avengers meet to discuss Thor's revelation that Loki is the mastermind behind the recent attacks on the Avengers. Meanwhile, in a holding cell, the Wizard activates a teleportation device hidden in his thumbnail and rejoins the Prime Movers. But Loki flies into a rage, saying Thor can trace the teleportation back to this location, and reveals himself to the Movers. Kingpin slips out, but Loki angrily immobilizes Wizard, Red Skull and Mandarin just as Thor appears with the rest of the Avengers. They engage Loki, and during the battle, the rest of the Prime Movers, now ignored, escape. Thor eventually defeats Loki, trapping him in a fissure of his own creation, declaring that the Avengers shall ever and always prevail. 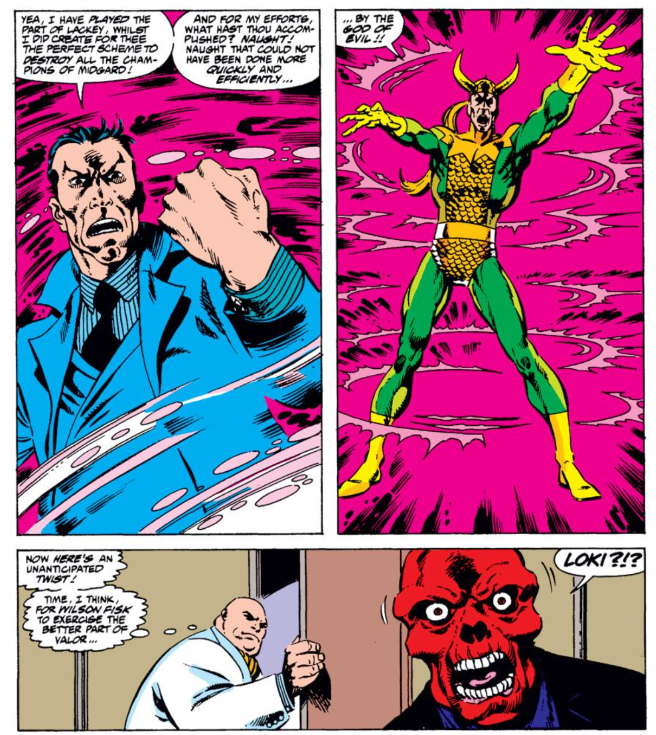 Avengers Annual #19: In the wake of the attacks on the Avengers orchestrated by Loki, Captain America, Thor and Vision meet to discuss the situation, in part using information obtained from the Wizard, the better to prevent being caught by surprise should similar attacks occur in the future. Avengers Spotlight #29: At the Vault, the Avengers and Fantastic Four supervise the return of the recaptured inmates. After they leave, the captive Wizard arrives, but his return was orchestrated by Loki, leading Klaw to attack the facility. Iron Man defeats him however, and the Wizard is returned to his cell. Amazing Spider-Man #329: As a parting gift to Earth's heroes, Loki fuses three of Sebastian Shaw's Sentinels into one massive Tri-Sentinel, setting it loose on New York. Meanwhile, Shaw attempts to strip Spider-Man of his cosmic powers, but in doing so, he inadvertently causes Spider-Man to realize the powers' connection to Captain Universe. More powerful than ever, he defeats the Tri-Sentienl, but burns out his cosmic powers in the process, leaving him to worry he didn't do enough with the power to make the world a better place.

Firsts and Other Notables
Avengers West Coast #55 reveals Loki's grand plan behind "Acts of Vengeance", to destroy the heroes he inadvertently created by sending unfamiliar villains to battle them. It also brings to an end "Acts of Vengeance", as the Prime Movers scatter in the wake of Loki's reveal, and Loki himself is quickly defeated by Thor. 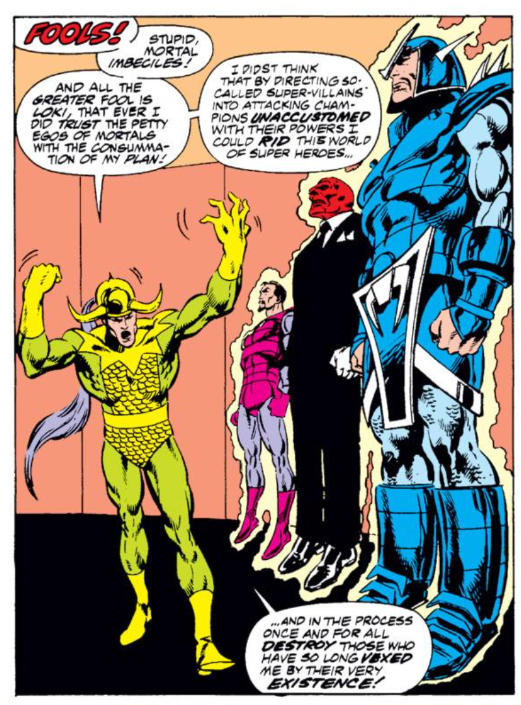 In Captain America #367, Magneto captures the Red Skull and, to punish him for his involvement with the Nazi regime in World War II, leaves him locked in a cell underground, with nothing but water. I know Red Skull is down there for at least a few issues and does eventually get out, but I have no idea exactly when he does so. 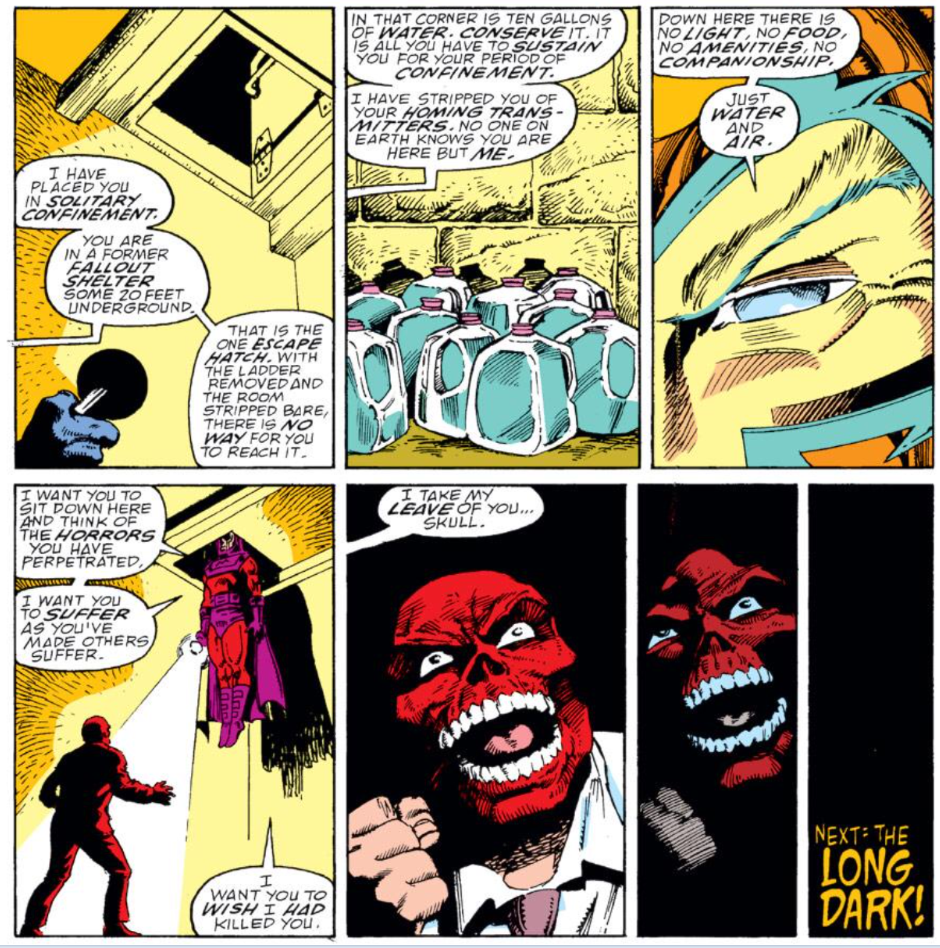 The second story in Avengers Annual #19, published the summer after "Acts" ended, in which Cap, Thor and Vision discuss "Acts", is clearly an effort by Mark Gruenwald to craft a stronger narrative out of the disparate pieces of the story. For the most part it works; I believe the idea of Red Skull robots, in addition to Doombots, is an invention of this story, to explain how Red Skull can appear in Prime Mover meetings when his capture by Magneto in Captain America #367 occurred prior to the end of the story, and it also establishes that the events of Cloak and Dagger #9 occurred simultaneous to the events of Avengers #312, which is why only Falcon and the disparate West Coast Avengers were on hand to battle Freedom Force. But at the same time, a clinical, nearly-Handbook style retelling of the story can only do so much to make the events seem more coordinated and significant than they really were. 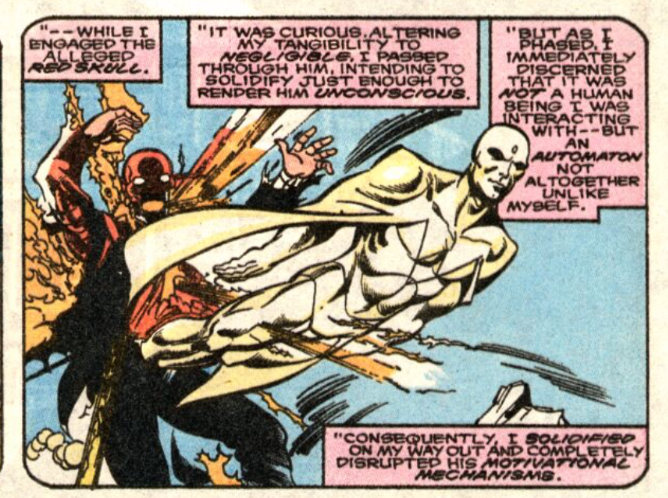 To wit, in that story, Captain America says that "Acts" represents the Avengers most devastating setback, specifically saying it's worse than the Masters of Evil's siege of the mansion, which seems like a stretch, given that the Masters captured the mansion, beat Hercules into a coma, tortured Jarvis and tormented Cap before being defeated, whereas the big blow in "Acts" was the sinking of Hydro-Base and little else.

After locking up Red Skull, Magneto attempts to help the catatonic Scarlet Witch, as seen in the last few issues of Avengers West Coast, setting up his post-"Acts" storyline in that series.

The prisoners who escaped from the Vault at the start of "Acts", as well as some new ones, are returned there in Avengers Spotlight #29. 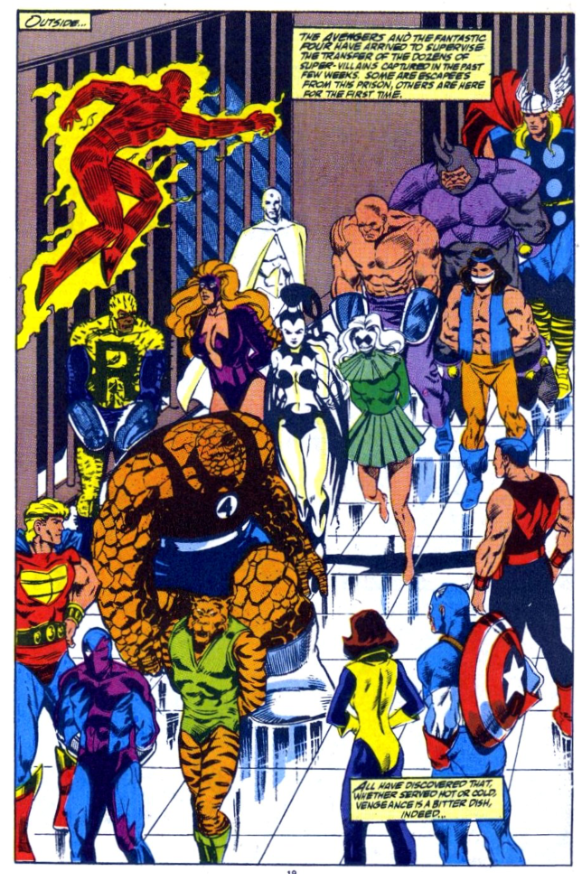 Amongst them is the Wizard, who was teleported there by Loki as part of a trap to attack the prison again, implying that when the Wizard tried to escape the Isle of Silence in Avengers West Coast #55, Loki redirected him to a prison transport. However, Avengers Annual #19 has the Wizard recording a statement for Cap, Thor and the Vision shortly after their battle with Loki. 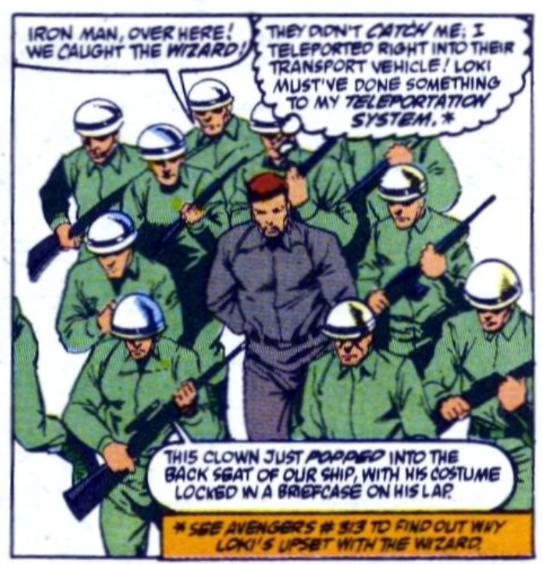 Spider-Man finally learns the origin of his cosmic powers in Amazing Spider-Man #329, and he manifests the traditional Captain Universe look as a result. 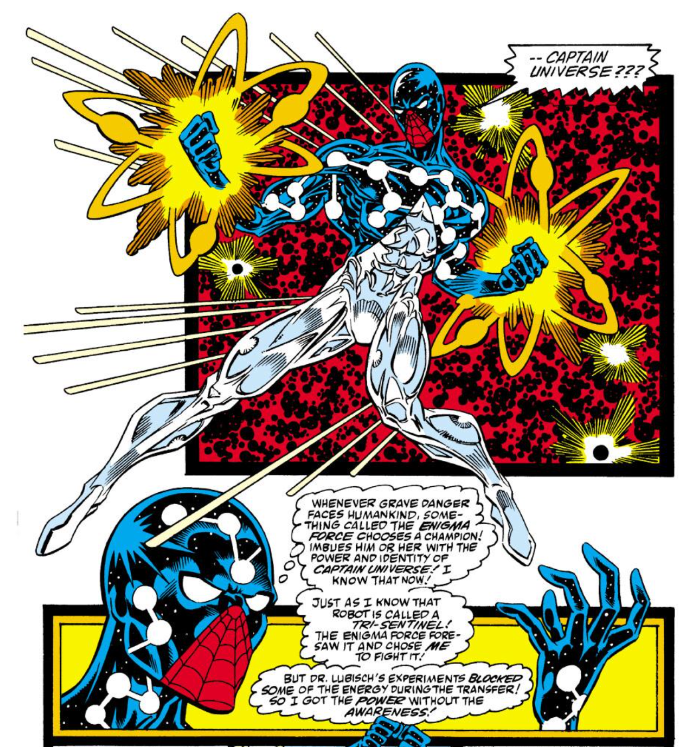 The Tri-Sentinel, a fused combination of three Sentinels, debuts in Amazing Spider-Man #329. It is created by Loki as a parting gift following his defeat. 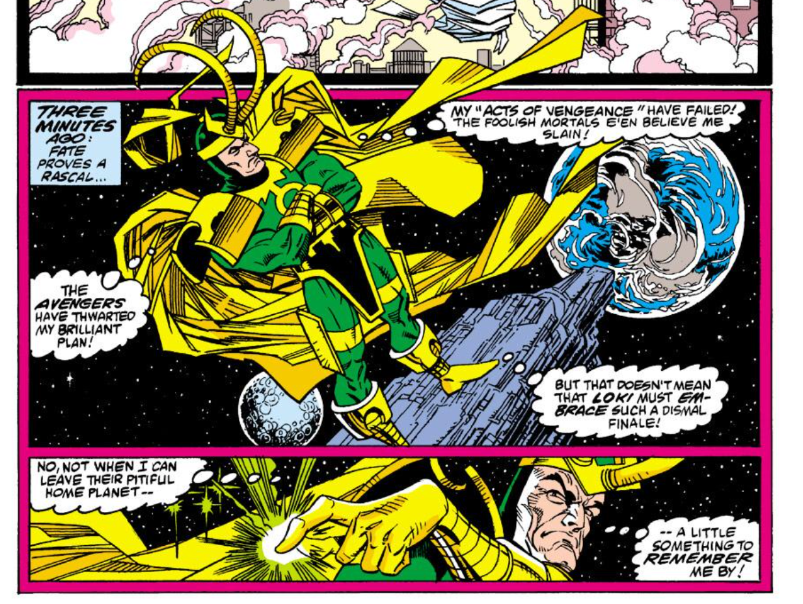 A Work in Progress
Loki's battle with the Avengers (and the location of the Prime Movers' meeting place) is a facsimile of the Asgardian Isle of the Silence, which is where Loki escaped from, triggering the events which led to the formation of the Avengers, in Avengers #1. 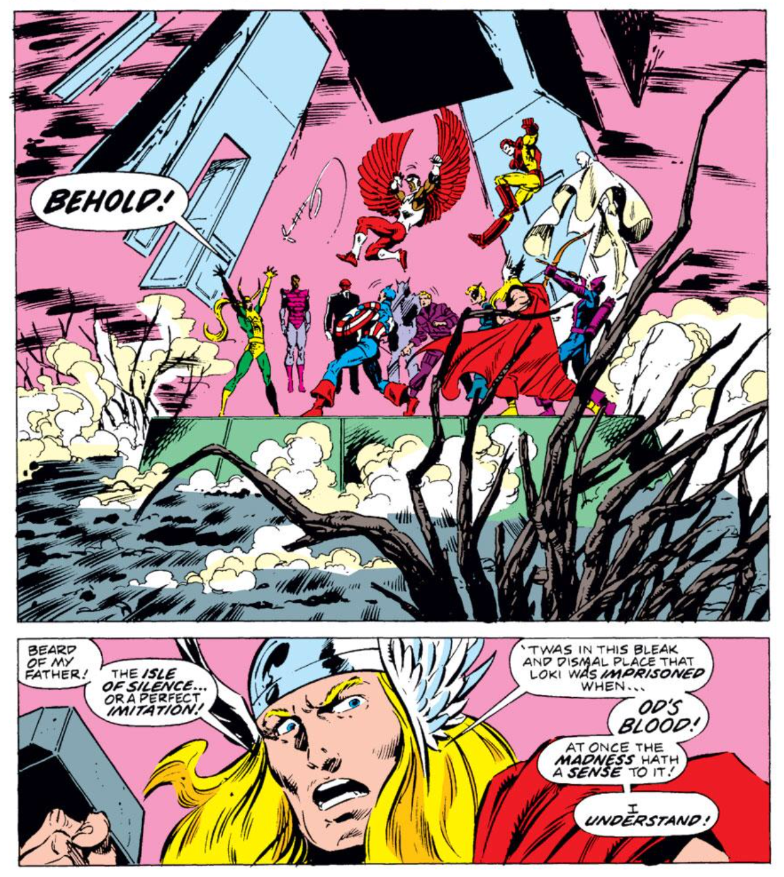 The Guardsmen at the Vault receive new armor from Iron Man in Avengers Spotlight #29, an effort by Stark to make up for destroying their earlier models (though he's careful to design them such that they won't work away from the prison).
The Red Skull cites Magneto's attack on the Soviet sub Leningrad as an example of his villainy, though as with his trial in X-Men #200, that's the only overtly villainous act that is mentioned.

Magneto refers to himself as the master of the four fundamental forces, a convenient way to avoid any "but ___ isn't magnetic!" observations. 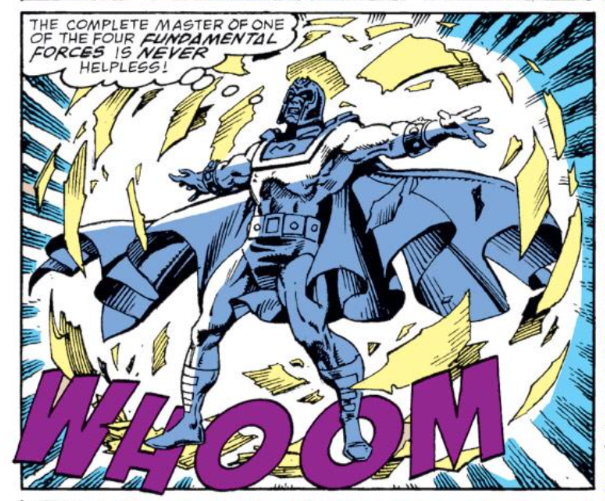 I Love the 80s
Spider-Man worries he didn't do enough with his increased powers, saying he could be taking down Kaddafi or ending Apartheid. 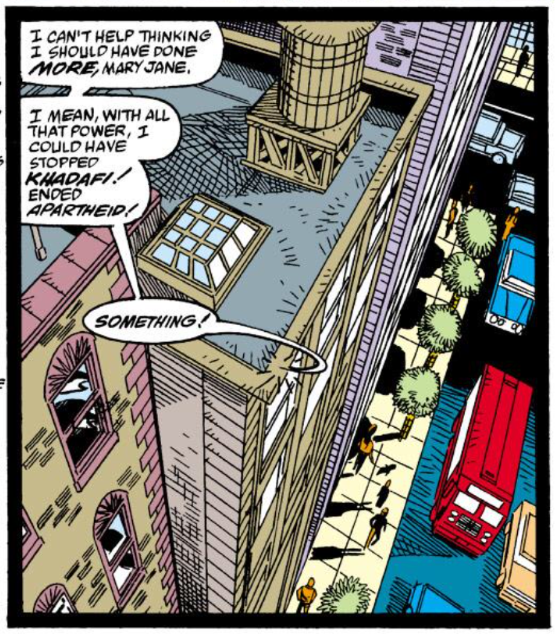 Teebore's Take
"Acts of Vengeance" comes to a close with a bit of whimper, as Loki stands revealed as the mastermind behind the attacks and is confronted by the Avengers in one issue, then is defeated by Thor in a few panels. It's an appropriate ending for a storyline that is more about the setup than anything (and where the most significant setback dealt to the heroes occurred early in the story's run), and while the ease of Loki's defeat makes sense (if he could take on the Avengers himself, he wouldn't have needed the Prime Movers and this whole scheme), that doesn't make it any more satisfying as a conclusion to a four month long crossover that spanned the Marvel Universe.

Once again, then, it's the events happening on the periphery of the story that standout, Spider-Man using his cosmic powers to battle a massive Sentinel, Magneto taking revenge on the Nazi Red Skull. In the end, as a crossover and overarching story, "Acts of Vengeance" is better for its parts than for its whole. The central idea of heroes battling unfamiliar villains works, and leads to some entertaining and/or interesting tie-in issues, but the unifying conflict is barely there. The story in Avengers Annual #19 story makes a valiant (and appreciated) effort at forming the parts into a more cohesive and compelling whole, but at the end of the day, this is the rare crossover where the ancillary issues are better than the ones chronicling the central narrative.