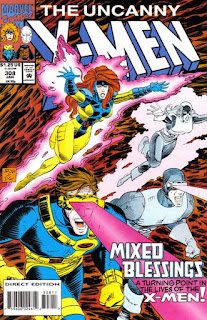 In a Nutshell
Cyclops & Jean Grey get engaged.

Plot
On Thanksgiving, Scott & Jean walk the grounds, reflecting on their past together. Meanwhile, Beast & Jubilee interrupt Forge, Banshee & Storm's leaf raking efforts, while Iceman, Gambit & Rogue attempt to build a scarecrow with Bishop, before deciding to start a football game. In Missouri, a man leaves his family and joins others aboard a bus labeled "Phalanx". Back at the X-Mansion, the football game concludes with Xavier getting tackled as he calls everyone in for dinner, while Scott & Jean's reminiscences conclude with Jean proposing to Scott. Later, as the X-Men gather for Thanksgiving dinner, Scott & Jean announce their engagement, and though Xavier has some reservations, he is grateful that, for a change, his children are happy.

Firsts and Other Notables
Cyclops & Jean Grey get engaged in this issue, with Jean proposing to Scott after the pair reminiscence about their past together on Thanksgiving, a nice reversal given that Cyclops last proposed to her (in X-Factor #53, an event mentioned but not footnoted here). In something of a rare occurrence (for superhero comics and genre fiction in general) the couple actually will get married, in X-Men #30, and remain so for a good long while (technically up to Jean's next death, in New X-Men #150). 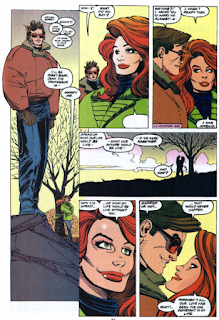 In a rather egregious example of the ongoing production issues at Marvel at the time, the actual proposal scene is marred a bit by the absence of words from one of Jean's speech bubbles; the letters column of a future issue reprints the panel with the words in place (she says "I'm tired of waiting, Scott"). 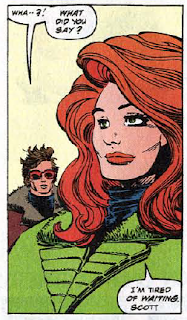 This issue kicks off a thematic trilogy of sorts, with Lobdell examining Scott & Jean's relationship here and over the next two issues, with this one focused on their engagement, next issue Xavier's reaction to it, and #310 featuring Cyclop's bachelor party.

After Jean proposes, Scott asks about staying with the X-Men, and Jean makes it clear she has no desire for them to leave the team after getting married. On the surface, it's a pretty basic bit of narrative housecleaning, perhaps meant to assure fans the couple isn't going anywhere. But it also reads differently in light of Scott's failed marriage to Madelyne, and how much of a dick he was to her in order to go back to being a superhero with his friends, and how much Cyclops being part of the X-Men now flies in the face of the aborted happy ending Chris Claremont tried to give him by marrying him off to Madelyne and having him retire from the team. Intentionally or not, Lobdell seems to be emphasizing that won't be happening again, as both characters will remain part of the team moving forward. 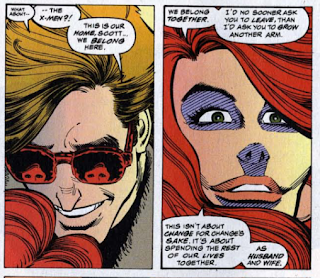 A brief, three panel sequence shows an otherwise-regular man getting into a car with other people labeled "Phalanx"; this is an additional tease for the upcoming "Phalanx Covenant" crossover, and this particular man will be seen again in that story.

A flashback shows Xavier helping a young Jean with her emerging telepathic powers. The retcon to the notion that Jean (who was initially only a telekinetic) received her telepathy as a "gift" from Xavier has already been established (in that it was revealed that Xavier actually suppressed her telepathy after the death of her friend Annie, and then re-activated it shortly before faking his death to fight the Z'nox), but this scene adds an additional, smaller retcon: that Jean's telepathy was already starting to emerge on its own, a result of Jean's feelings for Scott. 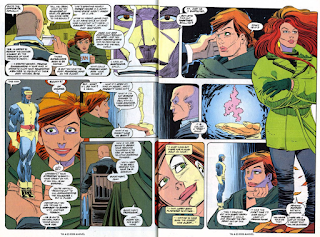 Bishop mentions that as a child in his future, he hid from the 'Emplates, beings who sucked the marrow from bones. Generation X #1 will introduce the villain Emplate, who sucks marrow from the bones of mutants, and is, if I recall correctly, considered the progenitor of the Emplates from Bishop's future. 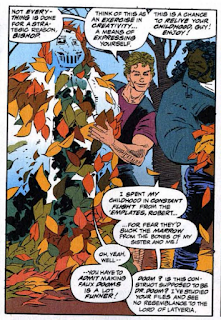 Amongst the guests at the X-Men's Thanksgiving dinner appear to be Iceman's parents, Trish Tilby, and Stevie Hunter.

This issue ends with some narration suggesting Xavier has reservations about Cyclops & Jean Grey getting married; next issue will address those. 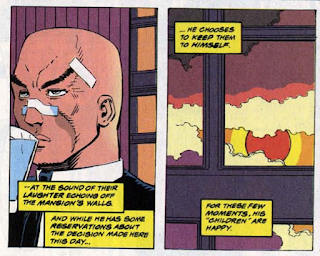 A Work in Progress
This issue gives up a new meet-cute between a Silver Age Cyclops & Jean Grey, showing that Jean was infatuated with Cyclops from shortly after they met (something previously established). The Official Index lists it as taking place between issues #1 and #2. 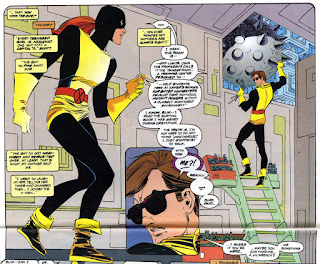 Forge is shown raking leaves alongside Banshee & Storm, but he is using a Romita-Tech rake, a little detail that cracks me up.

Gambit insists to Bishop that making scarecrows is a thing people do on "Danksgiving"; is that part of anyone's traditions? Cuz I've only ever encountered the notion in this issue. 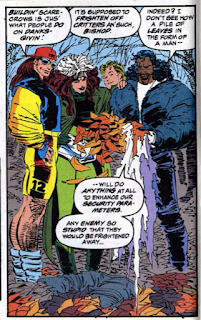 Revanche is shown playing football (but not speaking), just in case you forgot she existed.

Cyclops sending his son into the future is referenced, but the footnote points to the wrong issue of X-Factor (it is #68, not #67).

In Xavier's Thanksgiving toast, he notes that it's been an especially bad year for the group, citing Illyana's death, and the departures of both Colossus & Wolverine.

Jubilee makes a crack about Jean Grey's lack of a codename as the couple prepares to announce their engagement.

Young Love
To Lobdell's credit, the fact that Cyclops was previously married to a woman named Madelyne is at least mentioned in this issue.

The Awesome & Terrible Power of Cyclops
In the flashback, young Scott freaks out when he slips on a ladder, worried his glasses will fly free and he'll blast Jean. 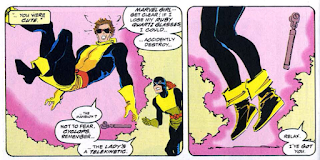 For Sale
The "Entertainment This Month" ad teases the upcoming Cyclops/Jean Grey marriage (somewhat spoiling the proposal in this issue, though Marvel was hardly keeping the wedding a secret), as well as the new set of Fleer Ultra X-Men cards. 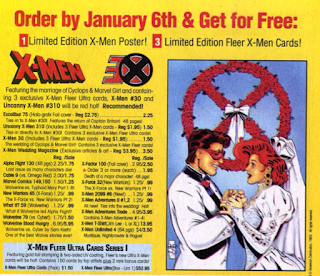 I would like some of this mutant gear, then and now. 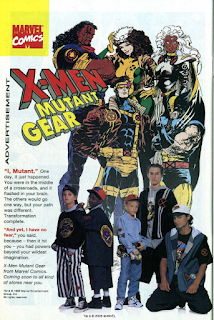 It's in the Mail
The upcoming eighth monthly X-title, Generation X, gets teased in the letters page.

Austin's Analysis
I love this issue. It is technically another Lobdell Quiet issue, focused as it is on character interactions, with nary a villain in sight (save for a five panel tease). As with previous such issues, Lobdell finds a lot of fun and interesting character combinations and reactions, from Jubilee & Beast demolishing leaf piles to Bishop's puzzlement over scarecrows to Professor X getting mauled at the end of the football game. The Thanksgiving setting is an effective touch too (with Christmas all-too-often the default holiday setting for writers who want to craft a touching/retrospective character-based issue).

But really, this issue is all about Scott & Jean getting engaged. I was a huge Scott/Jean 'shipper as a kid (though I certainly hadn't yet encountered that specific term yet), deeply invested in the state of their relationship with the zeal and high emotion for fictional characters that is hard to muster outside of childhood & adoslecencese, and while I'm sure Wizard had probably already told me that Cyclops & Jean Grey were getting married, I was still legitimately overjoyed to read their actual engagement here (then and now, I love that Jean is the one to pop the question). Thankfully, because this kind of quiet character stuff is where Lobdell excels, all of this mostly holds up today. There's some subtle retconning happening in the flashbacks to Scott & Jean's Silver Age interactions, but nothing too egregious, and it all works to sell the idea that Scott & Jean getting married is both A Big Important Thing Destined to Happen, and also just the next logical step for a couple of crazy kids in love.