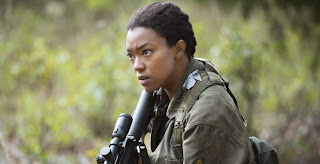 Life in Alexandria seems pretty sweet (relatively). They have houses, food, beer, running water, electricity, walls and welcoming parties. This is the kind of place you would think Rick's group is looking for. However, Rick's group is having trouble adjusting.

Somewhat surprisingly, Daryl and Michonne are the ones who seem most accepting of this newly found sanctuary. Daryl buddies up with Aaron on a hunting mission outside the walls and a spaghetti dinner inside the walls. Michonne feels safe enough to hang up her sword...for the time being. Perhaps it's just wishful thinking on her part but it's nice to know she at least wants to live a life peace. (Watching characters live a life of peace can be boring but I do want my characters to want a peaceful life.)

Meanwhile, Rick and Carol are semi-plotting to take it over Alexandria. They're claiming it's only contingency plan in case the Alexandrians are in over their heads. However, Carol verbally traumatized a young boy while Rick thought hard enough about offing a man simply to get into that man's wife's pants that he literally reached for his gun. I'm starting to wonder if Rick's group will be able to analyze the situation and take control of Alexandria only if such action is warranted or if they'll give in to pure id.

Sasha is having the worst time of it. She clearly can't get used to being in a safe environment and seems to resent the citizens of Alexandria for having an easier time. I'm not sure why she seems to be having the worst of it. Sasha has recently lost people close to her but so has everyone else in Rick's group. I suppose trauma affects everyone differently, though.

While Aaron and Daryl were outside the walls they come across the horse Buttons. Daryl makes the a-little-too-on-the-nose comment that the longer horses are in the wild the “more they become what they really are.” That has been the crux of the past two episodes. The question is if Rick's group has been in the wild too long. Can they become peaceful and trusting? Can they coexist with the Alexandrians? Or will they stay what they really are? (I would quibble that it's more “what they thought they had to become” instead of “what they really are” but you've all probably heard too much of that from me already.)

Other Thoughts:
Ahhhh...the gun silencer. The most unrealistic thing to pervade all of media. Although suppressors wouldn't be totally useless. They do make it harder to pinpoint where a gunshot came from. So maybe the zombies would have a harder time honing in on suppressed guns?

Rick called the people of Alexandria the luckiest people alive. I don't buy it. You don't survive this long on luck alone. This is probably a case of Rick not valuing intelligence and ingenuity over brute strength and selfishness.

To add to that point, don't underestimate Aaron. He was able to spy on the group undetected long enough to learn all about them and even left supplies for them undetected.

I'm not sure Aaron was legitimately "hunting rabbits" though. He was following Daryl.

I did legitimately laugh at loud at Abraham's response to Rosita noting that the party at least had beer.

First the dogs and now Buttons the horse. The Walking Dead really is into killing animals this season.

So, how much fan fiction is being written about Daryl and Aaron right now?

Also, who wouldn't want to watch a TV series devoted to Daryl offing zombies with his crossbow whilst riding a motorcycle?

Spencer reminds me of someone but I can't quite put my finger on who.

I definitely think there's a conflict within Rick. Part of him is coming to accept Alexandria but another part is fighting it.

I don't think Carol is conflicted, though. She still thinks they're weak and thus deserving of being overtaken.

Speaking of Carol, I feel like the audience was supposed to applaud Carol's traumatizing of a little child. I did not.

That being said, I'm still surprised that Carol didn't just go ahead and off the kid. Maybe that's progress?

Sasha's freak out at the end kind of played like "how can you be laughing and drinking inside these walls when zombies are eating people outside them?" But, really, Alexandria is a safe haven filled with people actively trying to recruit more people. What else should they do? Why can't they have a little fun?

Did Sasha go outside the walls for more target practice or did she intend to leave the place for good?
Newer Post Older Post Home
Posted by Dr. Bitz at 4:15 PM