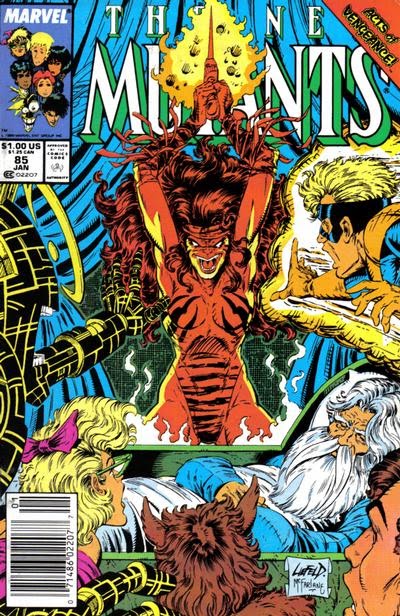 In a Nutshell
The New Mutants thwart Hela's attack on Odin.

Plot
Outside the city of Asgard, Hela's forces clash with Asgard's defenders. Spotting Dani heading towards Odin's tower, the New Mutants break off, determined to stop their friend from slaying him. Meanwhile, in Hel, Eitri breaks himself and the Einherjar out of Hela's prison. They enter Hela's portal, arriving outside Asgard. As the Einherjar reinforce the fight against Hela, Eitri heads for the castle, determined to destroy the sword he forged for Hela or die trying. Inside Odin's chambers, Dani prepares to strike the killing blow, but the New Mutants intervene. Dani fights back, burning Rictor and Roberto while knocking out Sam, forcing Rahne to realize Dani is no longer the friend they knew. Just then, Eitri bursts in and manages to strike Dani's sword with his hammer. 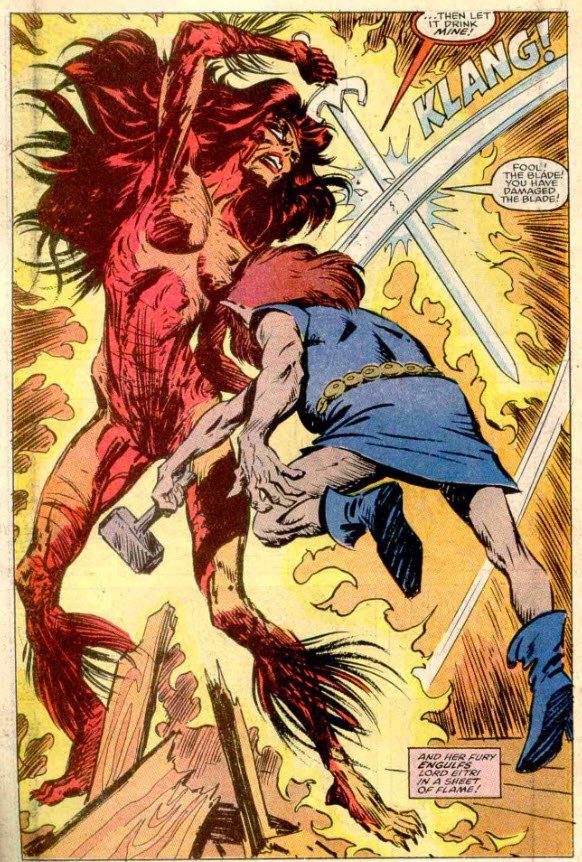 On Earth, Rusty tries to prevent the Vulture from escaping prison, and when he fails, he releases Skids so the pair can stop Vulture from freeing Nitro together. Back in Asgard, Sam wakes up as Eitri tells him he forged a flaw into Dani's sword, which his hammer strike has now exposed. As Dani prepares to deliver a killing blow to Odin, Sam flies at her, striking the flaw in the sword before it hits Odin, shattering it in an explosion of energy. With the sword destroyed, Hela's control over the enthralled denizens of Asgard also breaks, forcing her to retreat with her loyal forces back to Hel, declaring someday, both Asgard and the New Mutants will pay. Inside Odin's tower, Dani reverts to normal, then collapses next to an unconscious Sam and Eitri, while Rahne and Rictor wonder if she, or the rest of them, will ever be the same.

Firsts and Other Notables
In advance of his arrival as the book's new regular artist next issue, we get a Rob Liefeld cover (inked by friend and Spider-Man artist Todd McFarlane) on this issue, his first for the series (not counting New Mutants Annual #5).

And, of course, everyone on the cover is staged such that no feet are visible.

Inside, pencils are handled by fill-in artist Geoff Isherwood, though Brett Blevins is on hand to ink him, lending the final chapter of the story some visual consistency with earlier ones. I've always been curious if Blevins worked on this issue before he knew he was being replaced by Liefeld, or if he just hung around, doing the work and being happy to get paid for it even though his replacement had already been announced.

In addition to Thor, Loki's absence is noted this issue. He is, of course, on Earth orchestrating "Acts of Vengeance", though readers at the time may not have known that yet.

To wit, this issue gets another "Acts of Vengeance" label, and we get another few pages of the "Adventures of the Vulture and Rusty", as the Vulture fully escapes prison (after leaving his cell last issue) and Rusty breaks himself and Skids out to chase after him and stop him from releasing human bomb Nitro. 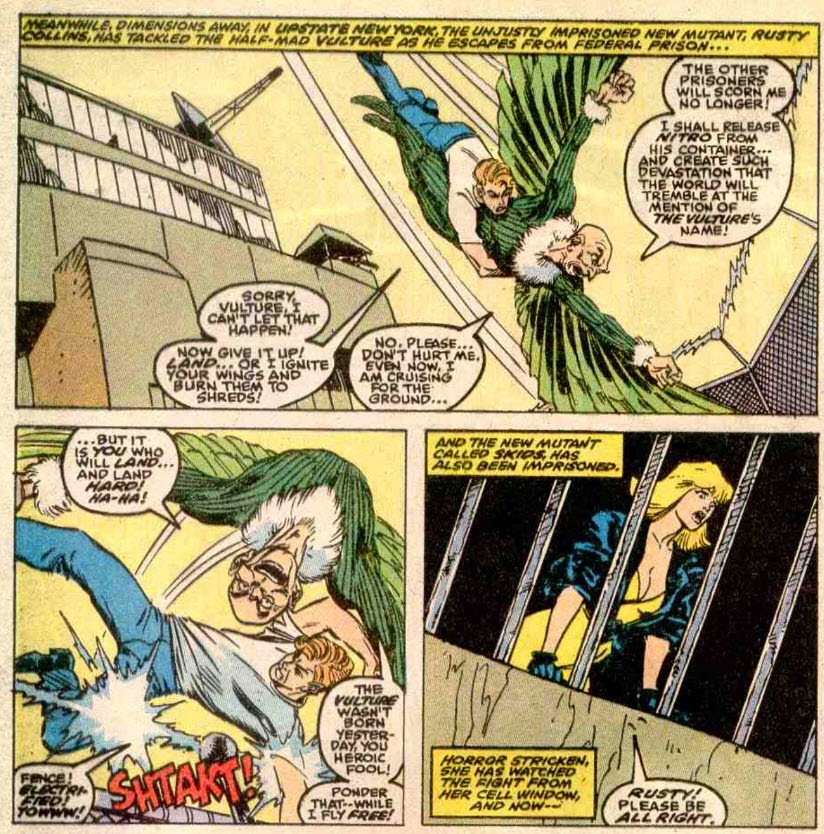 Skids takes a somewhat uncharacteristic "why help the humans?" attitude in response, possibly a callback to her Morlock days, possibly a reaction to how she's getting dicked over by the government (though specifically, by the mutant Freedom Force) and possibly a hint at her and Rusty's upcoming change in allegiances. Rusty argues that lots of innocent people will be hurt if they don't stop the Vulture, and also, that Nitro's trial will provide them with a stage to air their grievances and tell the world about Freedom Force's plans for the Inferno babies. 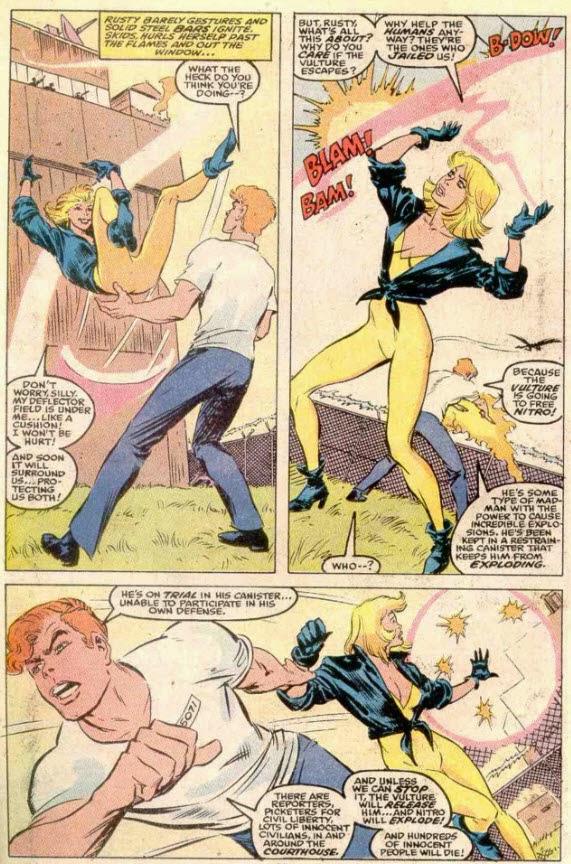 A Work in Progress
Dani returns to normal this issue, the first time she's been her regular self since issue #77 (and, arguably, since "Inferno"). 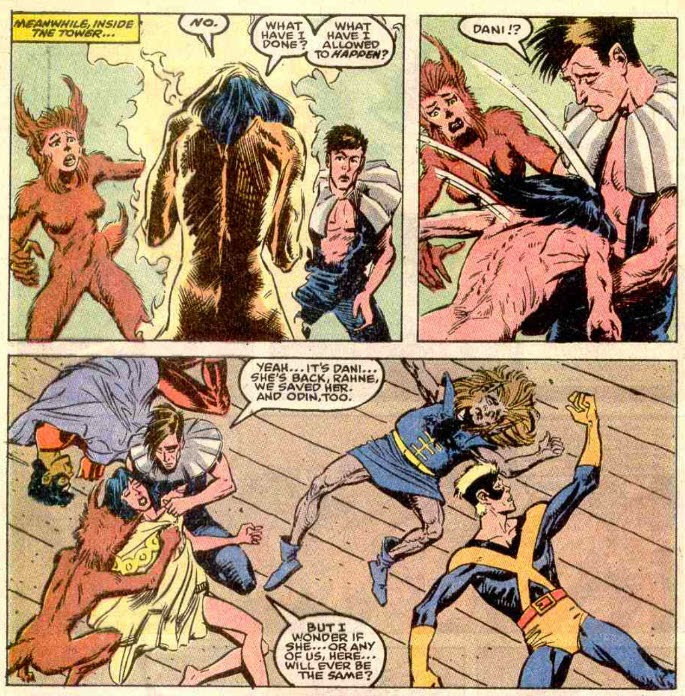 Teebore's Take
Finally, mercifully, this story comes to a close (well, there's some epilogue-y stuff in the next issue and the New Mutants don't actually leave Asgard until issue #87, but this is the end of the story for all intents and purposes). To Simonson's credit, the story ends strongly. The conceit of Dani being the one tasked with slaying Odin allows the focus of the climax to remain on the New Mutants, as they quickly breakaway from the larger fight to stop their friend, as much to save Odin & Asgard as to prevent Dani from becoming a murderer. Like the best chapters of this story, it grounds the action and fantastical setting in the relationship between the New Mutants.

As to the story as a whole, well, as had been said plenty of times already, it could stand to be shorter. Even after tossing out the completely unrelated fill-in that derailed narrative momentum early on, it could easily lose at least another chapter or two (especially when you consider this whole thing really started all the way back in issue #77). Clearly intended to recapture the magic of the New Mutants first Asgardian adventure (and, again to its credit, there is some enjoyment to be had in seeing characters like Eitri and Hrimhari building on their previous relationships with the New Mutants), it comes up short, in part due to the length but also due to the art. Love his work or hate it, Blevins is no Art Adams, and much of the enjoyment of the previous story came from his artwork.

It also doesn't help that the final two chapters are handled by fill-in artists, which, combined with the looming presence of Liefeld (announced already as the book's new artist, so even readers at the time without the benefit of hindsight knew he was coming), creates a sensation that even the creative team had grown tired of the story. Bottom line, there's a reason this story represents the only stretch of New Mutants issues which have never been collected in another format. It's probably not the worst New Mutants story ever, but in terms of how many issues it burns through relative to its merit and overall impact on the narrative, it's arguably the most detrimental to the series.

Next Issue
Tomorrow, the finale of "Judgment War" in X-Factor #50. Next week, "Acts of Vengeance" Part 3 and Excalibur #18.
Newer Post Older Post Home
Posted by Austin Gorton at 12:00 PM