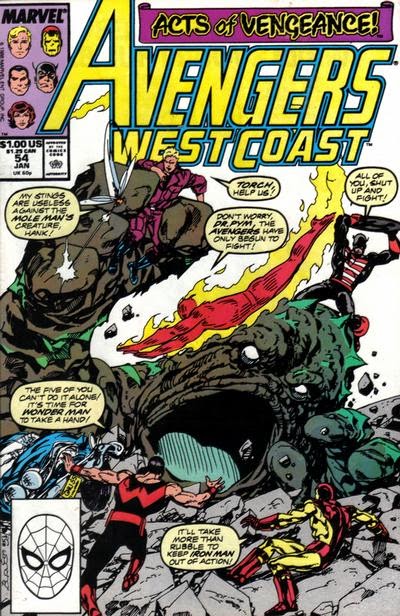 In a Nutshell
Loki is revealed as Mandarin attacks the Avengers.

Plot
Amazing Spider-Man #328: Having been approached by the Prime Movers and offered the detruction of the Hellfire Club's Inner Circle in exchange for the death of Spider-Man, Sebastian Shaw hires the Hulk to do the job. He then observes the fight as Spider-Man nearly kills Hulk thanks to his increased cosmic powers, and Shaw realizes that Spider-Man's powers may be even more a threat to him than Magneto and the Inner Circle, and resolves to find a way to remove them. Avengers Spotlight #28: The Mad Thinker is approached by the Prime Movers' lackey, but he rejects his offer to join the group. Forseeing trouble for his plans should the Superhuman Registration Act pass, however, he breaks out of prison and sends the super-villain Gargantua to attack a debate on the act involving Wonder Man and Wasp. The two defeat the villain, turning the crowds' opinion in their favor, as the Mad Thinker had planned. Captain America #366: As Captain America hunts the Controller, hoping to free Namor of his control, the Red Skull plots to take control of the Prime Movers' lackey. Cap faces off with the Controller, but he escapes, after which the Controller successfully places a control disc on the lackey, but it has no effect. 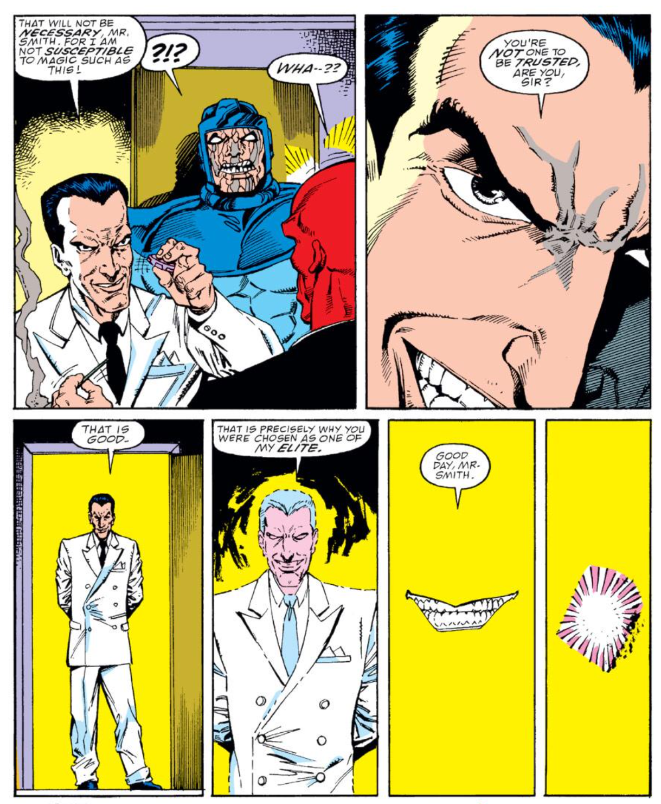 Avengers West Coast #54: Wonder Man & Iron Man search for the U-Foes but are attacked by monsters sent by Mole Man as Hank Pym, Wasp and Scarlet Witch return from the east coast. After the monsters are defeated, the team reconvenes at their headquarters and confers with Captain America and Quasar, the group concluding from the recent attacks that someone is out to destroy the Avengers. Thor #413:Seeking to discover the cause of his recent bouts of weakness, Thor seeks out Dr. Strange, who helps him discover that not only is Loki behind his condition, but the mastermind of the recent coordinated attacks on superheroes as well, prompting him to fly off to warn the Avengers. Avengers #313: Captain America, Vision and Wonder Man are salvaging what they can from the sunk mansion as the Mandarin arrives in Avengers Park, looking to destroy the team. Jarvis sends out a call to any available Avengers. Wonder Man, returning to the park, attacks the Wizard, who had followed Mandarin, as Black Widow and Hellcat respond to the alert as well. Joined by Thor, the Avengers defeat the two villains. Mandarin escapes, but the Wizard is captured. Mandarin returns to the other Prime Movers, who berate him for attacking the Avengers on his own. As they argue, Dr. Doom explodes, revealing that they had been merely allied with a Doombot all along.

Firsts and Other Notables
Despite lacking an "Acts of Vengeance" label on the cover, Thor #413 reveals that the Prime Movers' mysterious lackey is in fact Loki, which, as has been noted, wasn't all that tricky a reveal to guess prior to this. 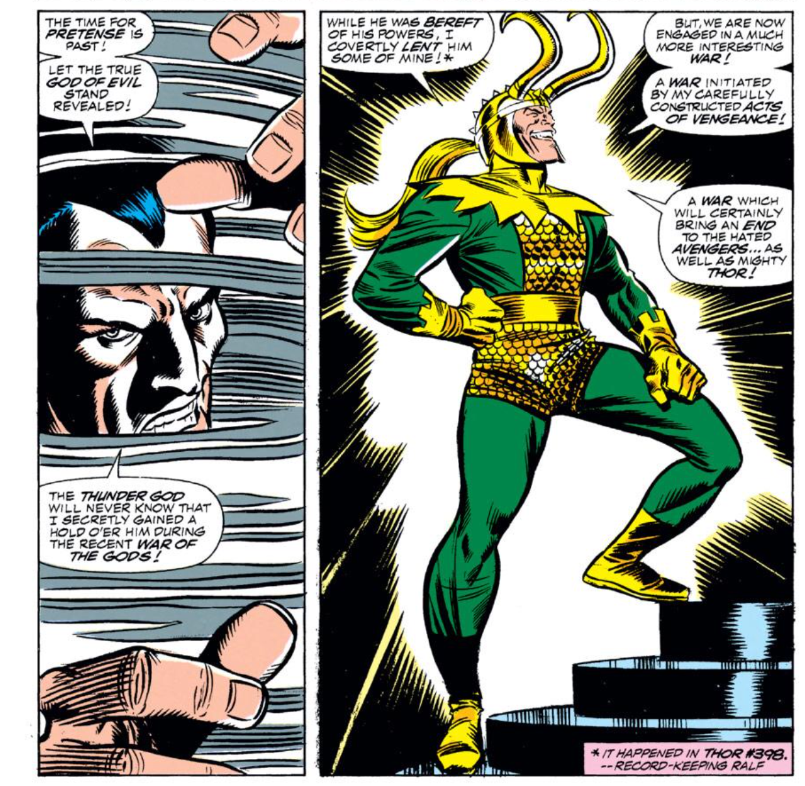 The Dr. Doom who has been seen as part of the Prime Movers is revealed to be a Doombot in Avengers #313, as the real Doom didn't find the affair worth involving himself in directly. That issue also finds the cracks showing in the Prime Mover alliance. It's also the only time the Prime Movers do anything directly, as Mandarin and Wizard attack the Avengers directly (while the rest of them complain about it). 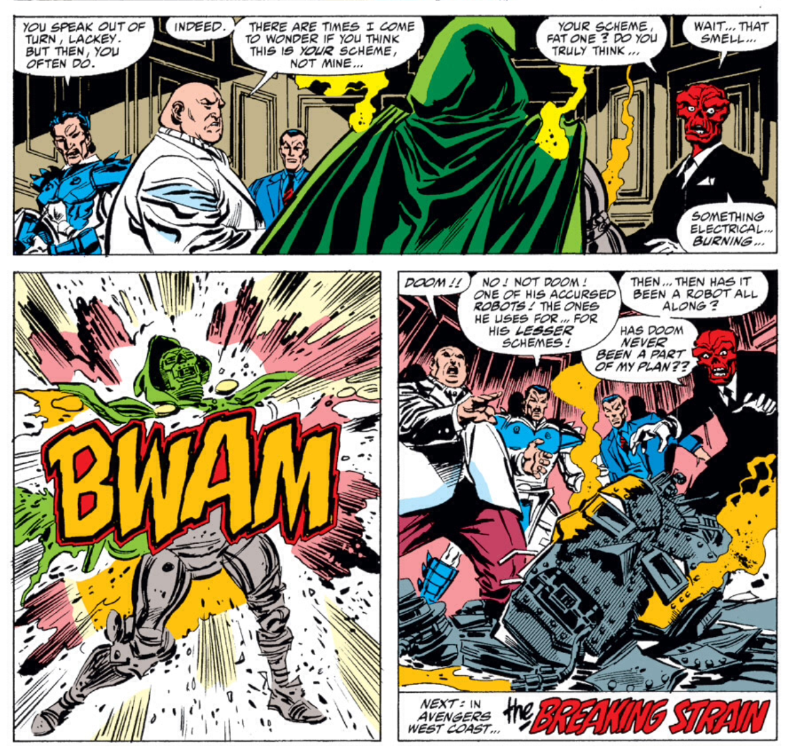 Sebastian Shaw, last seen in Uncanny X-Men #247, pops up in Amazing Spider-Man #328. He'll stick around for the following issue as well. 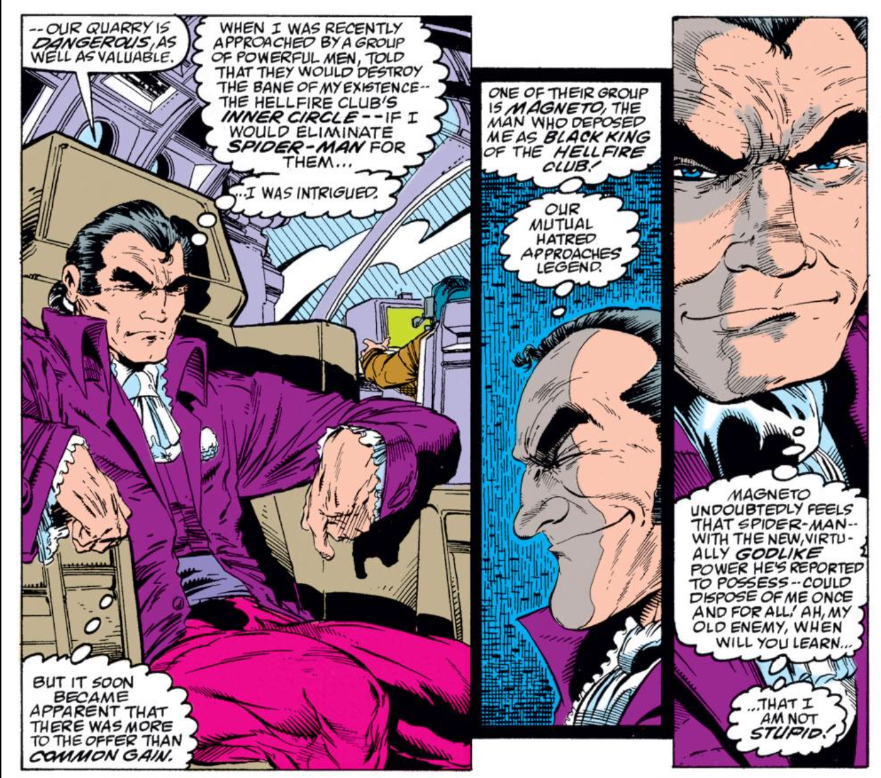 Amazing Spider-Man #328 is Todd McFarlane's last issue as the regular artist of Amazing Spider-Man, as he leaves that series to launch the adjectiveless Spider-Man series, which he will write and draw. Fittingly, it involves a battle between Spider-Man and the Hulk, as McFarlane's big break at Marvel came on Incredible Hulk and, as a result, in the speculator-driven early 90s, this was always a spendy back issue.

In Captain America #366, Magneto learns Red Skull is, in fact, the original Red Skull from WWII (at this point, Red Skull's body is a clone of Captain America's, into which Red Skull's consciousness was transferred, after which he got the red skull look back during a battle with Cap), a setup for the following issue. 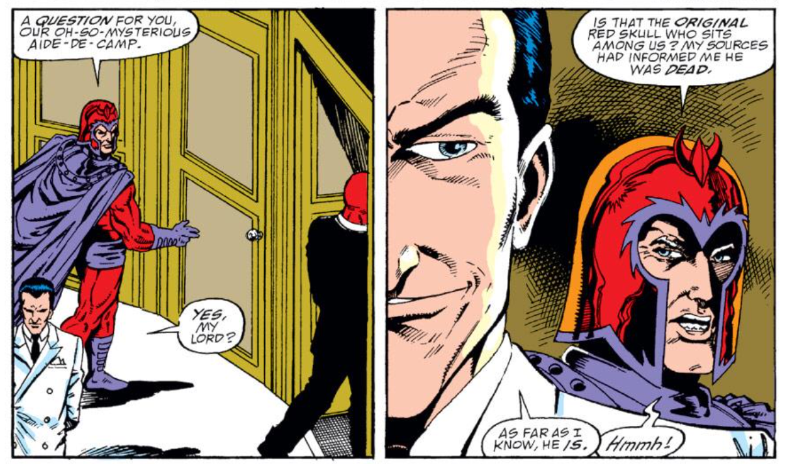 In Avengers Spotlight #28, the Mad Thinker tells the Prime Movers' lackey he knows who he is, in another bit that could be thinly veiled commentary regarding how obvious the identity is. 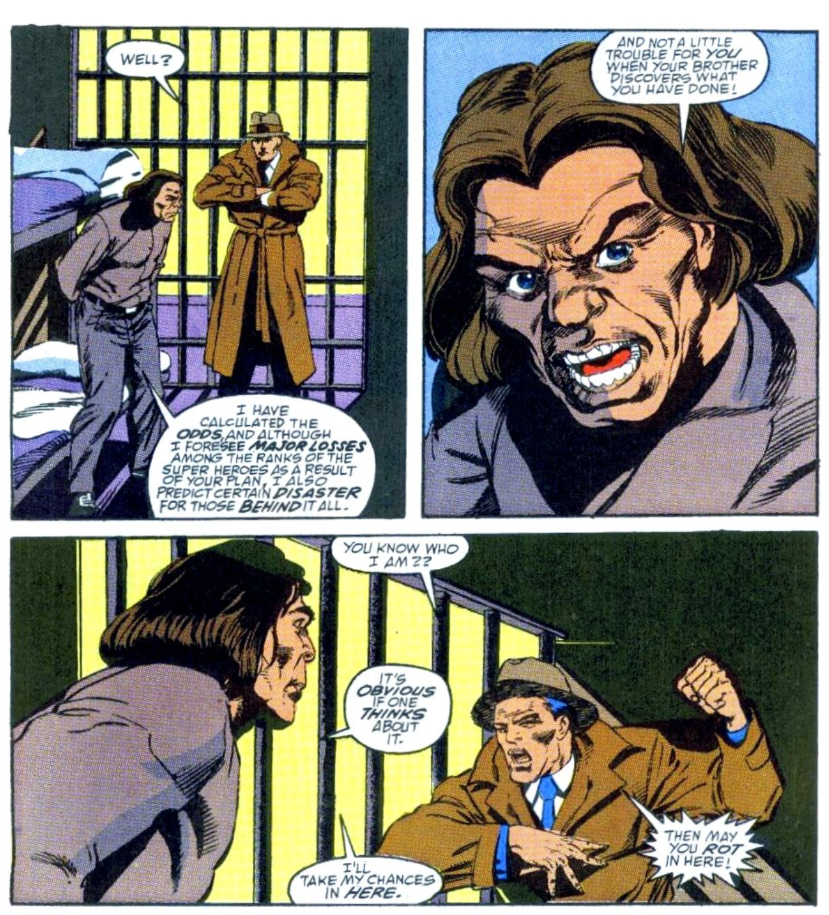 The Chronology Corner
The Thor/Juggernaut battle from Thor #411 crosses into Captain America #366.

Wonder Man's chronology in this batch of issues is a bit wonky, as he battles the Mole Man's monsters in LA, fights the Mandarin in New York, and appears with Wasp speaking out against the Superhuman Registration Act. It's probably safe to assume the public appearance came first, possibly even before Avengers West Coast #53, followed by AWC #54, after which he heads East (as Wasp, Pym and Scarlet Witch head west), for Avengers #313.

A Work in Progress
Sebastian Shaw's motivation in Amazing Spider-Man involves getting back at the Inner Circle from which he was ousted in New Mutants #75, specifically Magneto, though Michelinie perhaps sells too hard the idea that Magneto and Shaw are old enemies (they're enemies at this point, sure, but New Mutants #75 wasn't that long ago).

Hulk is able to survive being punched into orbit by Spider-Man. 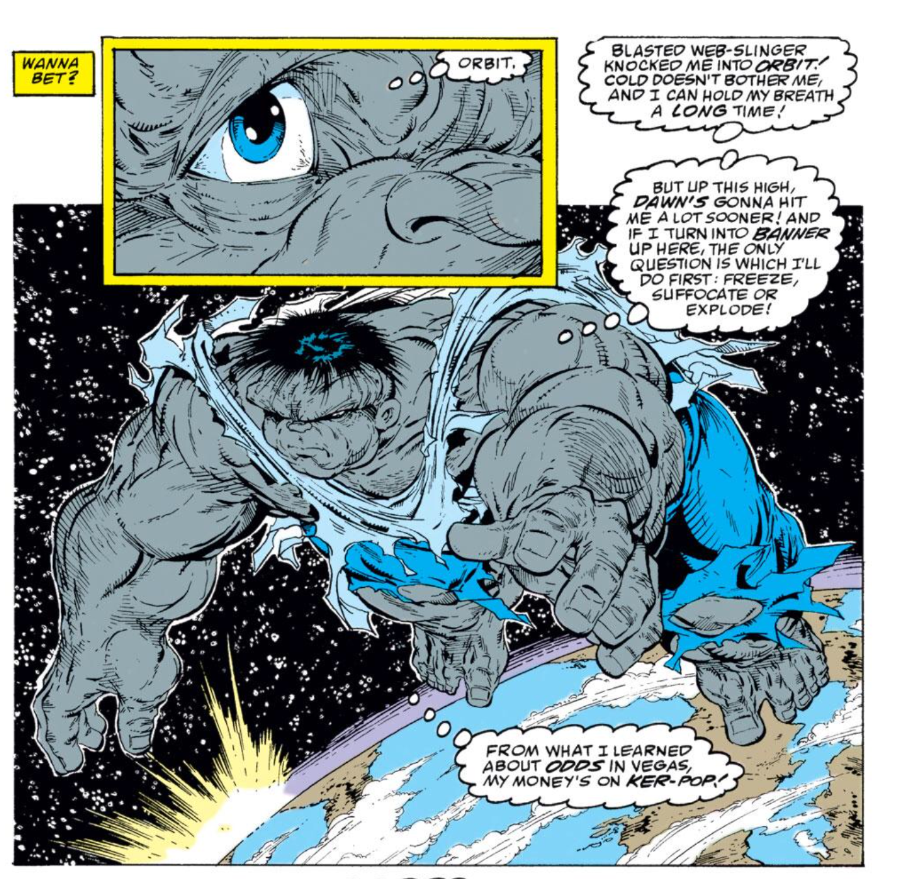 Between Avengers #312 and Avengers West Coast #54, Scarlet Witch reverted to the catatonic state she was in prior to the U-Foes attack. She (as well as Hank Pym and Wasp) are unknowingly rescued by Magneto.

Following that, in Avengers #313, he kidnaps Scarlet Witch from Agatha Harkness (her one-time mystical mentor)' home, saying a reunion is long overdue, setting up his role in the post-"Acts" Avengers West Coast story. 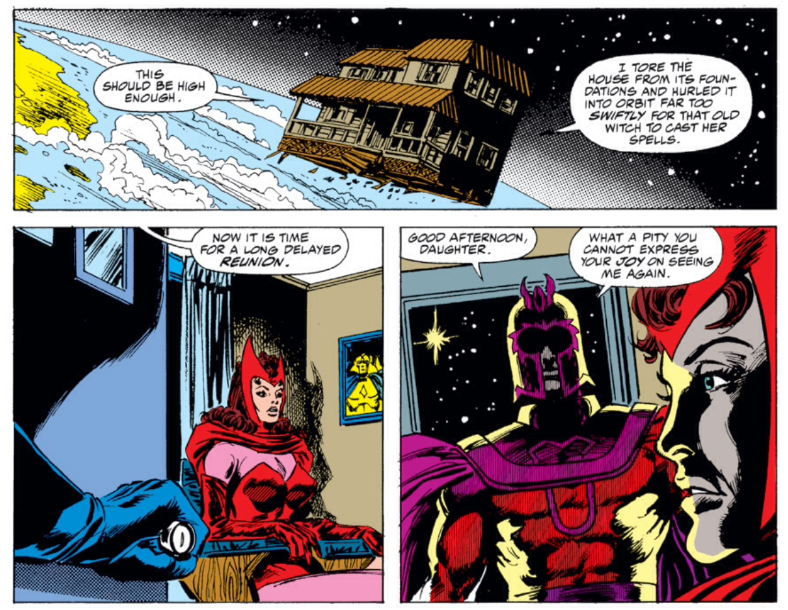 By Avengers West Coast #54, the Avengers have realized whomever is behind the recent attacks are targeting the Avengers. 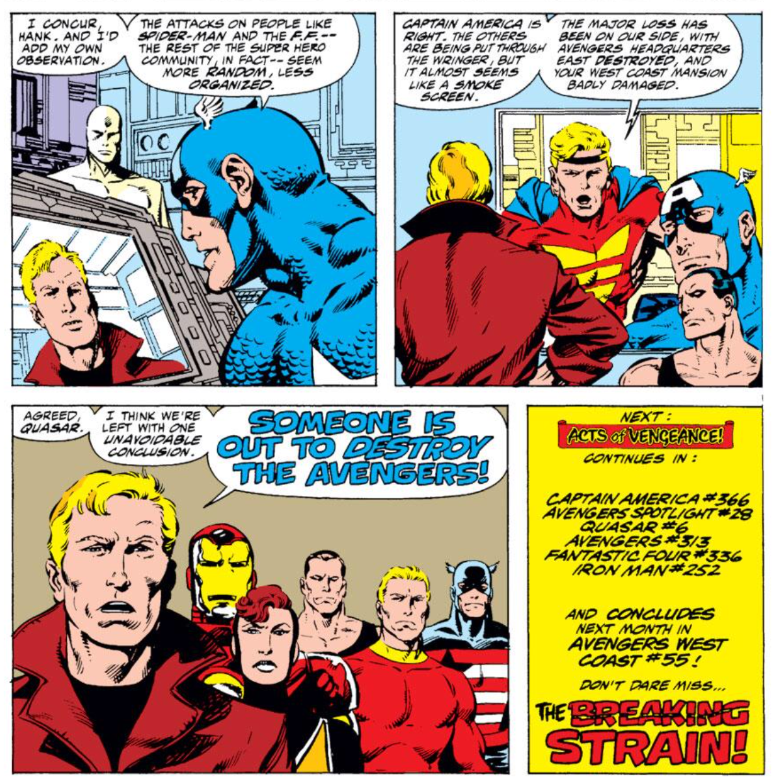 Captain America says that, since their headquarters was on an island, they did make an effort to waterproof some of their stuff, which he's hoping to salvage from the Hydro-Base wreckage. 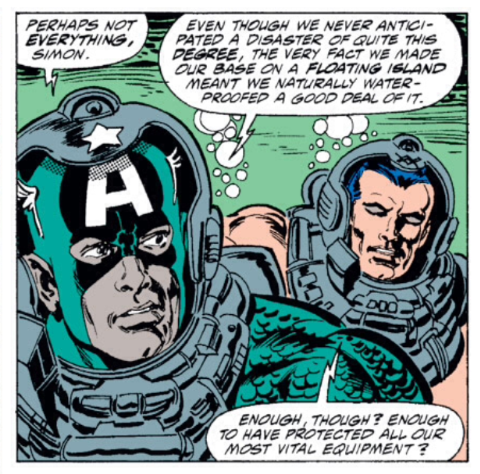 In a sign of respect to his battle prowess, Mandarin says he will slay Captain America with a single blow. 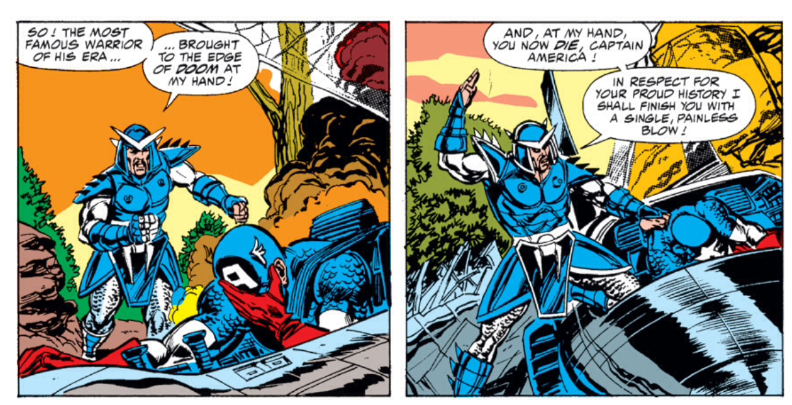 I Love the 80s
Spider-Man subs in for Batman in a scene out of the '89 Burton film. 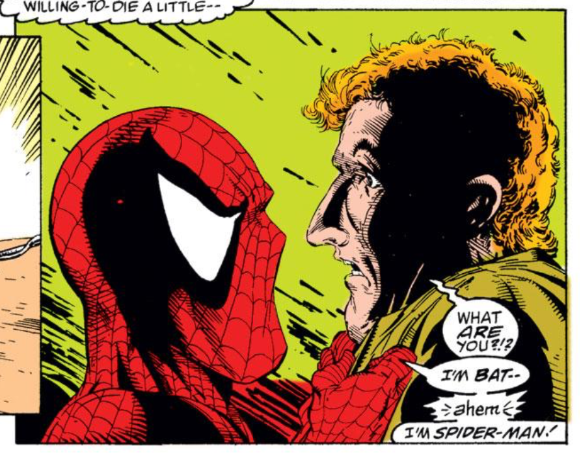 Mandarin is repeatedly referred to as a "Chinaman" throughout Avengers #313, though it's made very clear such a term is racist. 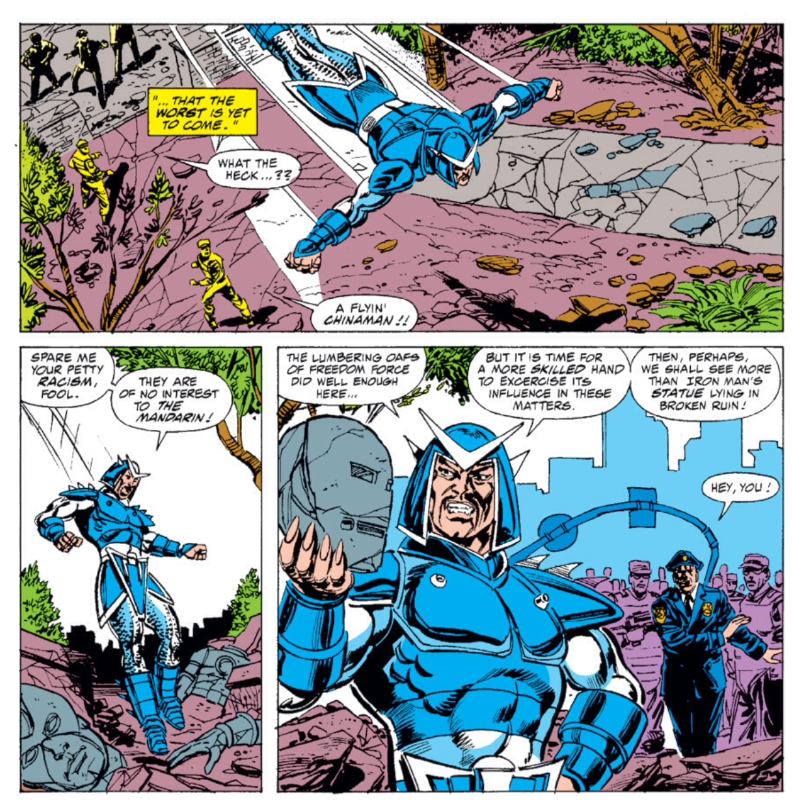 Teebore's Take
In addition to the lack of a strong central narrative, this months' batch of "Acts of Vengeance" issues underscores another problem with the crossover as a major line-wide story (as opposed to just a loose assortment of tie-ins): the Prime Movers never actually do anything. There's a lot of talk, both amongst them and amongst the Avengers, about how all the "side battles", the stuff like Venom fighting Quasar and Hulk fighting Grey Gargoyle, are just a smoke screen to cover up the real attack against the Avengers. Yet that attack never really comes.

The Prime Movers sit around their interdimensional conference room, realistically squabbling with each other, but aside from sinking Hydro-Base, that's all they really do. And when two of them actually do attack the Avengers, as in Avengers #313, they're roundly chastised for attacking the Avengers openly. Which would be fine, but for the fact that we never actually see the Prime Movers spring whatever attack they're waiting on, openly or otherwise. The end result is a story where what little central narrative there is turns out to be a lot of setup with woefully little payoff, of a lot of big name villains talking about how "soon" they'll finish those Avengers for good, but then "soon" never comes. Which just further adds to the sensation that "Acts" is more concerned with the tie-ins than it is in telling a specific overall story.