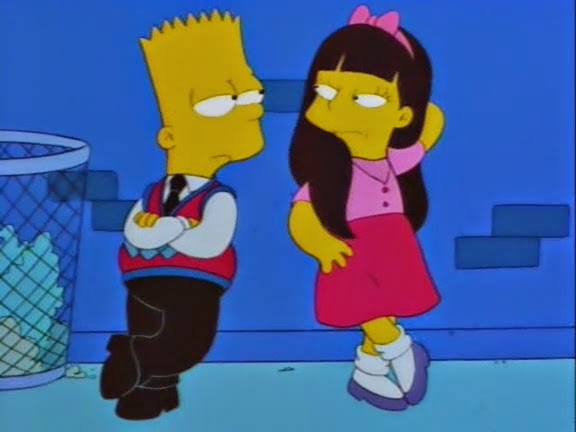 Or the One Where
Bart falls for Reverend Lovejoy's daughter Jessica.

The Setup
After a rousing game of Cowboys vs. Indians, the kids are dragged off to church, where Bart encounters the newly-returned-from-boarding-school Jessica.

Notable Notes
Queen of the Oscars Meryl Streep provides the voice of Jessica, and the actress reportedly recorded her lines in session with Nancy Cartwright, rather than on her own (as many big name stars do when recording voice over work). Obviously, because Streep voiced her, the character hasn't ever made a significant return appearance to date (this episode does make a point of writing her out, ending with Reverend Lovejoy contemplating sending her back to boarding school), though like many other voiced-by-big-star characters, I'm pretty sure she's made some non-speaking appearances since this episode.

This episode has a ton of quotes I've integrated into my personal lexicon, such as Nelson declaring that "records from that era are spotty, at best", to Jessica's delivery of "um, I have to go over here now", and Bart referring to his chest as "the chestal area". Also, Homer, upon realizing Bart is going on his first date, sings a montage of "Sunrise, Sunset" from Fiddler on the Roof, "Cats in the Cradle", and "Yes, We Have No Bananas", and I almost always think of the last of those when picking out bananas every week at the grocery store thanks to this episode.

Groundskeeper Willie gets a pair of great moments, first berating Principal Skinner for using him ("there's no such thing as Scotchtoberfest!") to entrap Bart, and later when he's overwhelmed trying to save the wee turtles after Jessica pulls the school fire alarm ("Save me from the wee turtles! They were too quick for me!").
The kids' Sunday School teacher pops up again for the first time since, I believe, the second season. I'm pretty sure this is her last appearance to date. 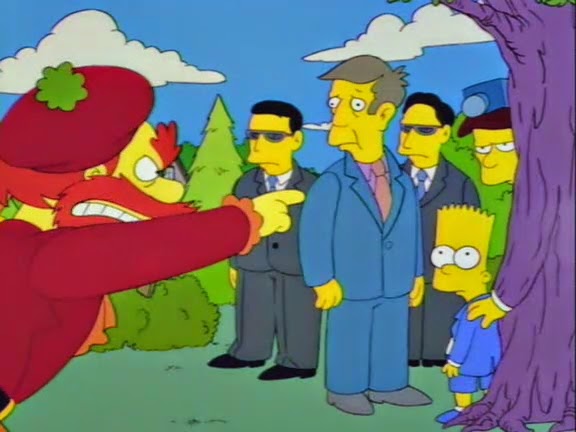 Favorite Quotes
Lisa: Don't be so hard on yourself, Bart. It's not your fault Jessica doesn't like you.
Bart: Is it my hair? My overbite? The fact that I've worn the same clothes day in, day out for the last four years?
Lisa: No, Bart. I just think you and Jessica are too different from each other to get along.  She's a sweet, kind reverend's daughter and you're the devil's cabana boy.

Bart: Jessica, I think this is too steep.
Jessica: Bart, you can't trust your perception at this altitude.

Marge: Have you noticed any change in Bart?
Homer: New glasses?
Marge: No...he looks like something might be disturbing him.
Homer: Probably misses his old glasses.
Marge: I guess we could get more involved in Bart's activities but then I'd be afraid of smothering him.
Homer: Yeah, and then we'd get the chair.
Marge: That's not what I meant.
Homer: It was, Marge, admit it.

Lisa: Bart, we can't just let her get away with this.
Bart: Give it up, Lis: she's a criminal mastermind. She's got 108 IQ, she reads at a fifth grade level, and...her hair smells like red Fruit Loops.
Lisa: Yeah? Well I eat Fruitt Loops for breakfast. 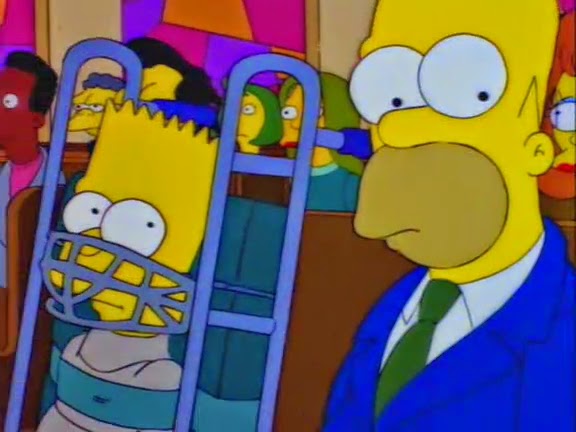 Teebore's Take
Though this isn't the first time the show has explored the notion of bad boy Bart falling in love, and while the idea of the minister's daughter being a wild child was a well worn cliche even in 1994, this episode still succeeds in exploring both those ideas. Bart's previous dalliance with romance was with an older woman (the tomboy next door from season four's "New Kid on the Block"), whereas this is the first time he's been smitten with a peer (and, importantly, someone who is a peer of Lisa as well, as her attempts to battle Jessica on behalf of her brother make for some of the episode's best material). And the rebellious reverend's daughter trope is injected with new life by putting Jessica in contrast with Bart: she's not just wild, she's so wild she scares even Bart Simpson, pulling pranks that cross the line from "troublemaking" to "criminal". It's an obvious yet clever idea that carries the episode (there's no B story here), and shows how, at the height of its power, The Simpsons could still spin "done before" plots into gold.

Stronger than I remembered, with lots of quotable lines, a great guest turn from the always-reliable Meryl Streep, and a well executed Bart romance plot. 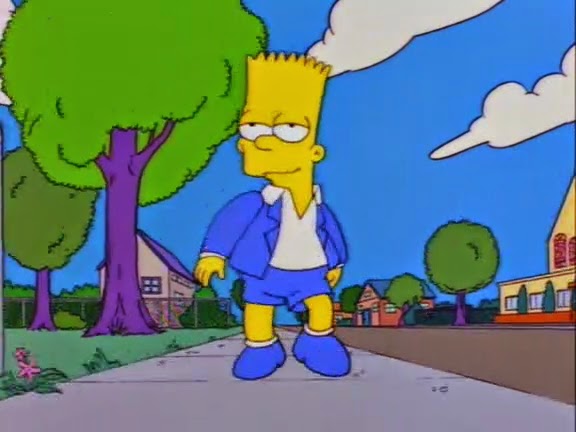