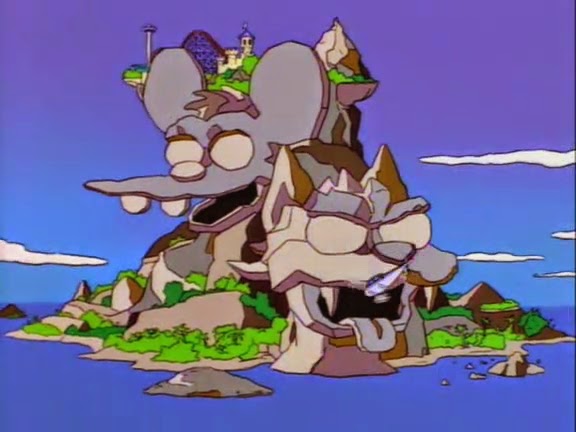 Or the One Where
The Simpsons visit Itchy & Scratchy Land.

The Setup
After seeing Krusty's commercial for Itchy & Scratchy Land, Bart & Lisa convince their parents to take the family there on vacation instead of the bird sanctuary, promising lots of family togetherness and good memories.

Notable Notes
This episode was created in response to newer, more stringent censorship laws, which had led to a decrease of Itchy & Scratchy cartoons on the show. The goal was to craft an episode that was as violent as possible, and showrunner David Mirkin had to fight Fox to keep much of it intact.

Thanks to this episode, whenever I park in a large parking lot or one which has labels intended to make it easier to remember where the car is parked (like how the Mall of America labels each level of the parking ramps with the name of a different state), I often remark (much to my wife's rolling eyes), "Remember, we parked in the Itchy lot."

Also, "smashy smashy", whenever I, you know, smash stuff. 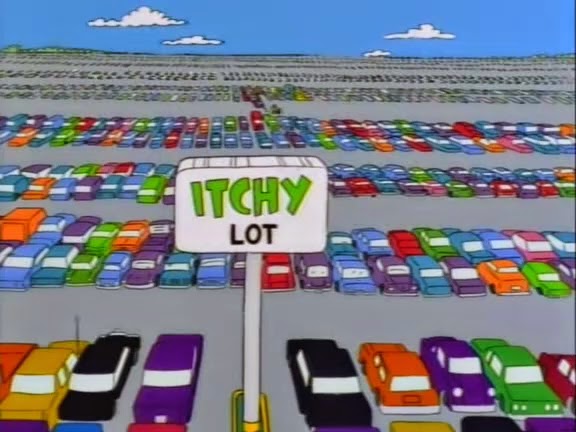 Bandleader: Welcome to T. G. I. McScratchy's where it's constantly New Year's Eve. Here we go again! Three, two, one!
Everyone: Happy new year!
Marge: It must be wonderful to ring in the new year over and over and over.
Waiter: Please, kill me.

Narrator: Roger Meyers senior, the gentle genius behind Itchy and Scratchy, loved and cared about almost all the peoples of the world. And he, in turn, was beloved by the world, except in 1938 when he was criticized for hiscontroversial cartoon, "Nazi Supermen Are Our Superiors".

Marge: Oh, I'm so embarrassed I wish there was a hole I could just crawl into and die.
Officer: OK, throw her in zee hole.
Marge: Oh, please: it was just a figure of speech! 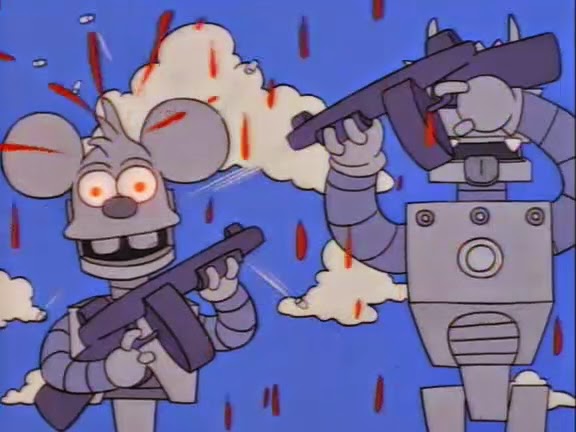 Teebore's Take
There's probably something deeper at play in this episode, about family vacations and managing expectations and the different ways the ephemeral notion of "family togetherness" can be achieved, as well the fear of capitalism run amok (with the Disney-esque animatronic robots rising up against humanity at the park) but really, this just a hilarious episode-long parody of Disney and Disneyland (with some generic action parodies thrown in). The goal is first and foremost to be funny, and it succeeds in that, to great measure. It's also a rare episode that's about the Simpsons as a family, as opposed to one or two of the individual members, where everyone is on equal footing within the plot and each given something humorous to do. Which, I suppose, ties back in with that whole "family togetherness" stuff.

One of the series' all time best, just for being so damned funny.
Newer Post Older Post Home
Posted by Austin Gorton at 12:00 PM