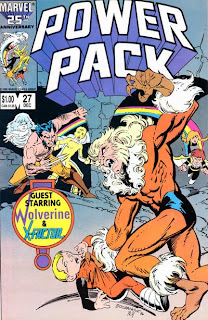 In a Nutshell
Power Pack faces off against the Marauders

Plot
Alerted to the massacre of the Morlocks thanks to Franklin Richards' power, and concerned about the welfare of their Morlock friends, Power Pack sneaks into the tunnels to investigate. They're quickly attacked by Sabretooth, but manage to escape by blasting the tunnel ceiling, collapsing it on top of him. They then run into Wolverine, who orders them out the tunnels before leaving to track down Sabretooth, but they decide to stay and keep searching for their friends. Meanwhile, X-Factor and a group of rescued Morlocks arrive at X-Factor headquarters, and though they are still dealing with a variety of injuries, the team decides to head back into the tunnels to find Angel and rescue more mutants, including the still-missing Artie. Back in the tunnels, Power Pack encounters Leech and the injured Caliban, just as they're attacked by a group of Marauders. Power Pack manages to hold them off until X-Factor arrives, prompting the Marauders to flee. Power Pack helps Leech deal with the loss of Annalee, and X-Factor promises to look after him. As Power Pack leave the tunnels, Beast and Iceman head back to their headquarters with Leech and Caliban as Cyclops and Marvel Girl continue to search for Angel and Artie.

Firsts and Other Notables
At this point in their series, Power Pack recently had their powers swapped amongst them (so each sibling has a new power taken from another) and returned from a battle on an alien planet, and while their parents are aware of the aliens, they don't yet know about their children's powers or costumed activities. Also, Franklin Richards, who is probably around five years old at this point, is hanging out with the Power kids (this issue mentions that Mr. Fantastic and Invisible Woman are away at the moment, but I believe Franklin is a regular guest of the Powers).

Pencils come from Jon Bogdanove, who will fill-in on X-Factor during the "X-Tinction Agenda" crossover and continue his working relationship with Louise Simonson on DC's Man of Steel book during the "Death of Superman" event.

The Chronology Corner
Wolverine appears between issues #211 and #212 of Uncanny X-Men, while Sabretooth appears between X-Factor #10 and X-Men #212. Curiously, Wolverine tells Power Pack he's hunting Sabretooth, yet acts as though he didn't know Sabretooth was in the tunnels when he encounters him in X-Men #212. Also, Wolverine's uniform is far more tattered here than in either X-Men issue. 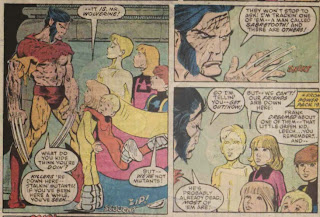 X-Factor (sans Angel) appears between X-Factor #10 and #11, with Cyclops and Marvel Girl next appearing after this issue in Thor #374. Beast and Iceman end this issue escorting Leech and Caliban back to their headquarters, which is where they are heading at the start of X-Factor #11. 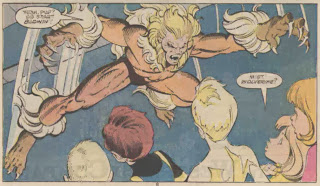 Cyclops, who ended X-Factor #10 being telekinetically carried back to X-Factor HQ by Marvel Girl due to injuries he suffered at the hands of the Marauders, is shown in this issue arriving at HQ under his own power, though this is likely an art error, as the script later makes mention of his injury. 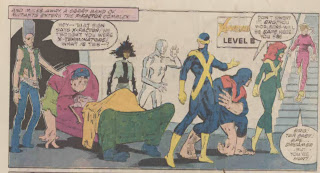 Jack Power doesn't like the mutant hunting X-Factor, and spends most of this issue wondering if they committed the massacre.

Scott Summers, Father of the YearWatching Leech react to the death of Annalee, whom he considered his mother, Cyclops sees firsthand the effect losing a parent can have on a child, finally realizing what he's put his son through via his absence, and chiding himself, after growing up an orphan, for not knowing better. Better late than never... 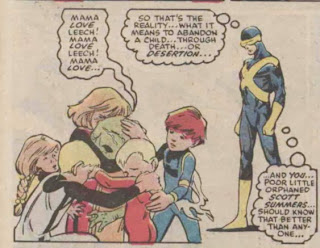 Teebore's Take
From the perspective of "Mutant Massacre", this issue is mostly concerned with filling in the gaps between X-Factor #10 and #11, delivering the Drain Dwellers to X-Factor HQ before sending the team back into the tunnels and into position for issue #11. But it's also infamous for having Power Pack fight the Marauders, and, theoretically, take the edge off the Marauders as a result. In practice, it's not quite as bad as its reputation: Power Pack, especially against Sabretooth, doesn't so much beat the Marauders as survive them. But there is no denying that the image of the barely-not-a-toddler Franklin Richards perched atop Arclight's head, stymieing her attack, takes some of the air out of the Marauders' unrelenting grimness and ferocity as established in the previous issues of the crossover.

I can see why Simonson, either creatively or commercially (or both) would want to bring her other title into the crossover, and given Power Pack's history with both the X-Men and the Morlocks, it makes sense in-universe as well, but for as much as Simonson wisely acknowledges the disconnect between the children characters and the reality of the massacre, there's no denying that the more all-ages and traditionally-heroic Power Pack characters fit in even less well to the increasingly dark world of the X-Men here than ever before. 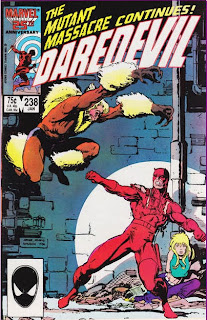 In a Nutshell
Daredevil fights Sabretooth.

Plot
In the now-deserted Morlock Tunnels, Sabretooth attacks a street gang, taking one of their women as a mate. The next night, Butch and Darla of the Brat Pack are hanging out with a group of kids in the tunnels when they disturb Sabretooth. When Butch tells Sabretooth that New York is under the protection of Daredevil, Sabretooth decides to track Daredevil down and prove him wrong. On the surface, Sabretooth locates Daredevil and attacks him. Daredevil takes the fight into the tunnels, believing that his radar sense will give him an advantage, but Sabretooth's night vision levels the playing field. Their fight spills into the chamber where Sabretooth is keeping the woman he kidnapped, and in an animalistic fury, he attacks her, making Daredevil believe she's died. Furious, Daredevil asks Sabretooth why he killed her, and Sabretooth has no answer, saying only that the hunger made him do it before running off. Just then, the woman awakens, not dead after all, and Daredevil takes her to safety.

Firsts and Other Notables
This issue is not an official "Mutant Massacre" tie-in (it doesn't appear on the Mutant Massacre map), but the cover labels it as such, and is generally considered part of the story by fans (even though it really adds nothing to it).

Butch and Darla, of the Little Rascals-esque Brat Pack that Nocenti introduced in Longshot, appear in this issue. I'm not terribly familiar with Nocenti's Daredevil run (aside from its reputation, like all Nocenti works, to be somewhat socially-conscious and message-y), but I believe some assortment of those characters are regular supporting characters in the book throughout it. 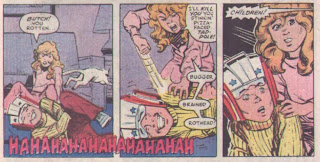 Art comes from Sal Buscema and Steve Leialoha, both of whom are familiar to X-readers at this point, but whose work in this issue, while perfectly competent, is nothing special.

The cover to this issue is drawn by Art Adams and inked by Frank Miller's longtime inker Klaus Janson, which gives Adam's pencils a darker, more raggedy look.

The Chronology Corner
Sabretooth appears here between Uncanny X-Men #212 and #213, and the events of this issue take place after Thor has cleansed the tunnel of bodies in Thor #374.

Teebore's Take
Of all the "Mutant Massacre" tie-ins, this issue is easily the weakest, both in terms of craft and its impact on the overall narrative. It's essentially a Daredevil/Sabretooth fight that pays lip service to "Mutant Massacre" by taking place in the recently-vacated Morlock Tunnels. Nocenti overlays their fight with two different turgid metaphors, comparing it first to a dog fight Daredevil witnesses and later to a parallel tale about a cat who hunts, but doesn't kill, a mouse. It's all terribly overwrought, and worse, there's nothing about the story that requires it to take place during the massacre, nor does it add anything to that story. Furthermore, Nocenti writes Sabretooth wildly out-of-character, turning him into an animalistic and near-monosyllabic beast at various times, which is pretty far from the snearing, taunting character we've already seen elsewhere. Bottom line, this issue reads like Nocenti wanted to get in on the fun, pulled an inventory story out of a drawer, dropped in Sabretooth, then called it good. It is in no way essential reading.

Next Issue
Tomorrow, we look at Thor's contribution to "Mutant Massacre" in Thor #373-374, followed by the Mephisto Vs. limited series. Next week, Malice makes her move in Uncanny X-Men #214.
Newer Post Older Post Home
Posted by Austin Gorton at 12:30 PM