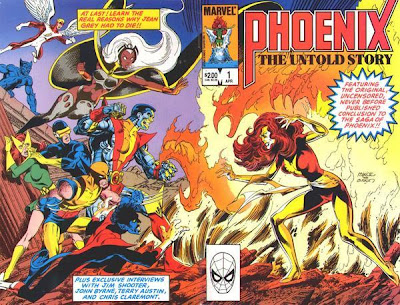 In a Nutshell
The original ending to "The Dark Phoenix Saga".

Plot
On the Blue Area of the moon, the X-Men engage the Shi'ar Imperial Guard in a duel for the fate of Jean Grey. The X-Men are quickly overwhelmed, leaving Cyclops and Jean to make a final stand against them, but they too are defeated. Aboard the Shi'ar ship, a gathering of the strongest telepaths from the Shi'ar Empire prepares to perform a psychic lobotomy in order to remove Jean's powers. Wolverine protests, but Cyclops reminds him that the X-Men gave their word to honor the results of the duel. As the telepaths do their work, Cyclops can feel Jean's power slip away through their psychic rapport, an experience he describes as watching someone die while dying yourself. When the psychic surgery is over, Jean is unconscious but alive and powerless, and the defeated and bitter X-Men leave the Shi'ar ship. Meanwhile, from his home on the moon, the Watcher comments on the nobility of the X-Men and the potential in humanity symbolized by Phoenix, and expresses his belief that the future of humanity will be filled with promise and fulfilled potential. 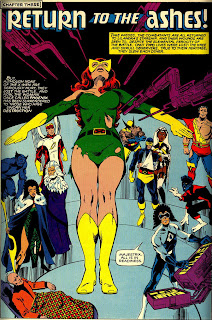 Firsts and Other Notables
This issue reprints X-Men #137, but with the original ending in which Jean Grey is lobotomized and loses her powers, instead of killing herself. It also contains a transcript of a round-table interview between Chris Claremont, John Byrne, Terry Austin, Jim Salicrup and Louise Jones and Jim Shooter discussing the circumstances which led to Jean's death and the process of redoing issue #137.

This issue was published in 1984, roughly four years after the publication of issue #137 and two years before Jean's return. Though there are some comments in the interview (particularly from Byrne) that retroactively seem to be hinting at Jean's resurrection, it seems unlikely that any of those plans would have been in motion in 1984.

A Work in Progress
The main point of divergence occurs five pages from the end of the issue. Following Scott and Jean's desperate last stand against the Imperial Guard, the panel which, in issue #137, depicted Phoenix manifesting herself once more now simply shows the Shi'ar ship with the words, "it's over". It then cuts to a captured Jean being prepared for her psychic lobotomy.

In addition to the five completely different pages that close out the issue, revisions that Claremont made between this issue and #137 are sprinkled throughout the story, mostly during the "down time" sequence that precedes the big Imperial Guard/X-Me dust up. In general, these versions of the sequences focus less on how each character views Jean and her recent actions.

Most notably, in this version, Lilandra offers Beast and Angel an opportunity to leave the ship, as they are not current members of the X-Men. Beast tries to take her up on her offer, but Angel intervenes and tells her they are both staying. Later, Beast bemoans that Angel missed his cue, as Beast was planning on leaving the ship to rally the Avengers and other heroes, which is a nice little bit that helps further isolate the X-Men. 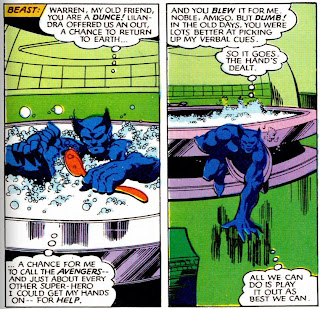 Angel has a different line of dialogue which suggest he misses being an X-Man, foreshadowing his upcoming return to the team. 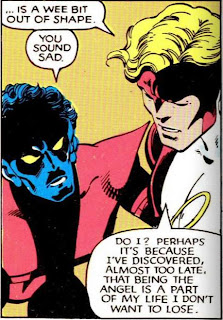 Later, before being visited by Jean in her old Marvel Girl outfit, Cyclops thinks back on Storm's question from X-Men Annual #3 (the same question he remembers at Jean's funeral in issue #138) and muses on his life at the orphanage growing up, and compares being there to being with the X-Men. 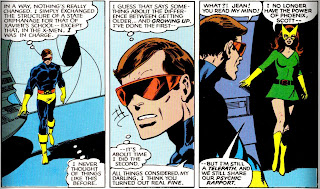 Lilandra says that the Shi'ar are unwilling to kill Jean outright, as they are uncertain what ramifications her death might have on the M'Kraan crystal.

As Wolverine argues against lobotomizing Jean, he refers to Cyclops as "Scott", which somehow makes the panel more affecting. 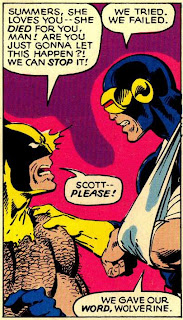 The conversation between the Watcher and the Recorder in this issue is less poignant, as it centers on a more general notion of the significance of humanity as depicted by the honor of the X-Men, rather than on how Jean's sacrifice was a showcase for the power and uniqueness of humanity.

This issue also contains a look at the original splash page to issue #138: 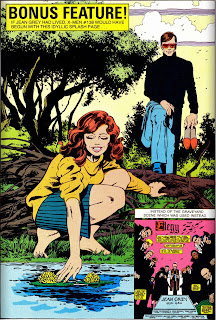 I Love the 80s
For another take on the ending of "The Dark Phoenix Saga", check out What If (vol. 1) #27 with my internet pal Siskoid, which asks the question: what if Phoenix had not died?

Young Love
In contrast to what was published in #137, in this issue Wolverine decides he's not ready to die yet, because he has loose ends in his life, mainly Mariko, offering further proof that as far as Claremont was concerned, the Cyclops/Jean/Wolverine triangle had been put to rest, if it had indeed existed at all.

John Byrne on the original ending of "The Dark Phoenix Saga"
"The original "ending" saw print in an UNTOLD STORY one shot Marvel put out about 15 years ago -- which seemed to confuse a whole rack of readers, since they would constantly reference the "untold" ending as a reason why certain things could or could not happen. I say "ending" because it was really the beginning. Our intent was to turn Phoenix into a full-fledged VILLAIN (which is why I scragged the asparagus people), and to this end 136 originally ended with her being psychically lobotomized by Lilandra's people. About a year later we'd planned to have Phoenix reassert herself, and start the whole thing going all over again. (Shooter knew this to be our plan, by the way, but when the story started to roll it somehow became important that Phoenix be punished for her deeds, unlike, say, every other Marvel villain.)

Chris Claremont on the original post-"Dark Phoenix Saga" plans
"John wanted to have her essentially lobotomized, reduced to the level of a 12-year-old child, for whom the mere presence of Scott would cause psychic angst and grief, so we'd have your basic impossible love affair. I didn't go for that. I was willing to accept a few issues of her being, essentially, in shock. But what I wanted to do then was spend about the next eight issues or so having Jean come to terms with the fact that she can no longer move thing by thought, that she is locked inside of her head fro the first time in her adult life...at the same time she has the memory that she had godlike powers, and more importantly, what she did with them. And then what I wanted to do was build up to #150, where Magneto kidnaps her and offers her the Phoenix. He can restart it all, give it all back, in return for a little, you know, "Smash the little fuckers." So anyway, then we would have the X-Men battling Magneto, and in another room, Jean with the Phoenix there offering itself to her, facing the choice of a lifetime. Does she accept this power that she wants with every fibre of her being, knowing that if she takes it she will probably eventually lose control again, because she's not evolved enough, and go on a rampage and kill and maim and destroy? And she denies it. She says, "No! Get thee from me Phoenix!" And the idea is, it is better to be human than it is to be a wrathful goddess. And the she and Scott marry and they live happily ever after, and then in the 20th anniversary they have a baby."

"'Dark Phoenix' was just supposed to be a middle chapter of a story. 'Phoenix' was the first part, 'Dark Phoenix' was the second part and it was all supposed to culminate in X-Men #150. Magneto would figure out what was going on, grab jean and offer the Phoenix power back. From the beginning, Dave and I always saw Jean as a victim, as did John when he came on the book. She was swept up by powers and forces beyond her control. What happened wasn't her fault because she was literally surfing a power tsunami that was beyond her control. A tragic thing had happened to her and she had no chance within the context of that story. When Magneto offered her the Phoenix power, she would assert her innate heroism and say, 'No, I will not do this. I am not ready to be a god.' She would turn her back on the one thing she wanted more than anything in the world and get on with her life. Mind you, at that point, she would be totally powerless. There would be no more Marvel Girl. The power would have been burned out of her. She couldn't be any sort of X-Man any more."

Teebore's Take
Though it wasn't well known at the time of issue #137's publication, it quickly became public knowledge that Claremont and Byrne had been forced by Jim Shooter to change the ending of "The Dark Phoenix Saga", and that what saw print wasn't the original ending to the issue. While I have no idea just how quickly that became known, by 1984 it was apparently well known enough (and X-Men enough of a bestseller) that Marvel saw a money-making opportunity in releasing the original, unedited version of the story, along with a roundtable discussion laying out the details of the revision process for those not in the know. The issue itself remains something of an interesting curiosity, showing not just the final five original pages of the issue but how Claremont went back and tweaked the script leading up to the rewritten ending to better account for the revisions.

Comparing the two endings, it is clear what this original version is lacking: tragedy. Though certainly colored by our knowledge of the alternative, the loss of Jean's power doesn't have the same resonance, for us or the characters, as the loss of her life (Wolverine gets a line about how taking away her powers is tantamount to crippling her, but the fact remains: at the end of the day, though depowered, Jean gets to go off into the sunset with the man she loves). More importantly, it robs the character of agency. The ending of issue #137 which saw print makes Jean active in her fate: she decides the threat of going mad with power isn't worth her life, she acts to put a stop to that threat. In the original version, she merely fights alongside the X-Men, is defeated, and then lies unconscious while things are done to her. The story in that version isn't about her, but rather reactions to her. While it is decidedly less tragic, it also does the character a great disservice, writing her out of the book as a passive character to whom things are done, instead of a character whose actions drive the plot. Though it is always difficult to compare what actually occurred with what might have been (especially given how significant "The Dark Phoenix Saga" is to the X-Men mythos), more than anything Phoenix: The Untold Story makes it clear that, though the ending it got wasn't the original intent of the creators, it was the ending the story needed, and the ending it deserved.

Next Issue: X-Men Annual #4
We put "The Dark Phoenix Saga" behind us as a special guest, around whom strange things tend to happen, leads us through "Nightcrawler's Inferno".
Newer Post Older Post Home
Posted by Austin Gorton at 8:00 AM