Retro Review: Marge on the Lam 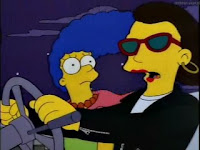 Or the One Where
Marge spends a wild night out with her neighbor, Ruth Powers.

The Setup
After Homer gets his arms stuck in vending machines and can't go to the ballet with Marge, she invites Ruth, beginning their friendship.

Notable Notes
Ruth Powers, who first appeared in the fourth season episode "New Kid on the Block", returns, once again voiced by Pamela Reed (who you might remember from Kindergarten Cop and Parks and Recreation, where she plays Leslie Knope's mother). Though she develops a strong friendship with Marge in the course of this episode, she hasn't made a significant appearance since this episode, occasionally showing up in crowd scenes and the like.


George Fenneman, who did the narration on the TV show Dragnet, also guest stars, lending the end of the episode a Dragnet-style summation of the fates of the characters.

Continuing this season's strong batch of film parodies, much of this episode is a parody of Thelma & Louise, including Homer's scene inside Moe's and his jump off the cliff with Wiggum.

This episode opens with the Simpsons watching a Garrison Keillor-esque comedian performing during a PBS telethon, which I mention only because I'm from Minnesota and thus required to mention Garrison Keillor whenever possible. 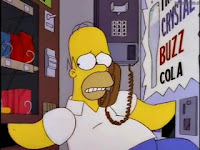 Quotable Quotes
Repairman #1: Homer, there's no easy way to tell you this: I'm afraid I'm gonna have to saw your arms off.Homer: They'll grow back, right?
Repairman #1: Oh...yeah.
Repairman #2: Wait a minute. Homer, are you just holding on to the can?
Homer: Your point being...?

Homer: Marge, I know you didn't believe me about the vending machines. That's why I had the firemen write me a note.
Marge: [reads] "Mrs. Simpson, while we were rescuing your husband, a lumberyard burned down."
Homer: D'oh! Lumber has a million uses...

Lionel Hutz: Mr. Simpson, I was just going through your garbage, and I couldn't help overhearing that you need a babysitter. Of course, being a highly-skilled attorney, my fee is $175 an hour.
Homer: We pay eight dollars for the night, and you can take two popsicles out of the freezer.
Hutz: Three.
Homer: Two.
Hutz: OK, two. And I get to keep this old bird cage.
Homer: Done!
Hutz: Still got it.

Lisa: Mr. Hutz, why are you burning all your personal papers?
Hutz: As of this moment, Lionel Hutz no longer exists. Say hello to Miguel Sanchez!

Marge: We can't trick these guys. They are highly trained professionals!
(Ruth turns off the car lights.)
Chief Wiggum: Oh my god, it just disappeared! (Gasp) It's a ghost car! There are ghost cars all over these highways you know.
Homer: Hold me!
Wiggum: Only if you hold me!

Wiggum: Dispatch, this is Chief Wiggum, back in pursuit of the rebelling women.
Dispatcher: All right, your current location?
Wiggum: Oh, uh, I'm, er, I'm on a road.  Uh, looks to be asphalt...oh, geez, trees, shrubs...er, I'm directly under the earth's sun...now! 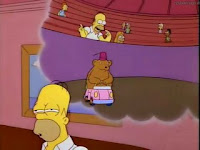 Teebore's Take
This is the fifth season's first Marge-centric episode, and while it continues this season's remarkable string of top-notch, hilarious episodes, Marge unfortunately doesn't contribute as much to the hilarity as some characters. Despite driving most of the plot, she is for one overshadowed by Homer, who, jealous of Marge's new friendship with Ruth, decides to have his own night out on the town and ends up palling around with Chief Wiggum, a character combination that works simply because both of them are so daft. Additionally, Lionel Hutz pops up for a brief but memorable turn as the kids' babysitter, accounting for one of my all time favorite Lionel Hutz appearances. Even Ruth, with her steely-eyed determination and casual disdain for the law, manages to outshine Marge. The end result is another fantastic episode with a ton of great lines (several lines from this episode are a part of my regular vernacular); it's just a shame Marge isn't responsible for more of the memorable moments in an episode she ostensibly headlines.

One of the series' funniest and quotable Marge-centric episode yet, though largely in spite of and not because of Marge. 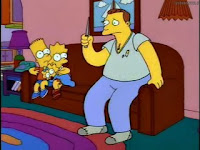