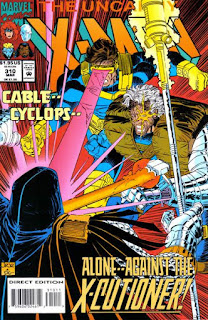 Plot
On their way to Cyclops' bachelor party, Cyclops & Banshee respond to a proximity alarm in the mansion and discover Cable waiting to talk to Cyclops. At a bar in Greenwich Village, the rest of the male X-Men have gathered, wondering what is keeping Cyclops. Back at the mansion, X-Cutioner teleports inside, and Cyclops sends Banshee onto the party. As Cyclops & Cable hash out their issues pertaining to Cyclops sending Cable into the future as a child, Sabretooth senses X-Cutioner, and alerts Cyclops. As the party continues, the X-Cutioner heads towards the med bay, intent on killing the comatose Emma Frost. He is stopped by Cyclops & Cable, who work together to force X-Cutioner to retreat. Afterwards, Cable & Cyclops make peace, then Cable teleports Cyclops to the party, and assures him that he'll be at the wedding.

Firsts and Other Notables
This issue features Cyclops' bachelor party, though he misses most of it (or, at least, we don't see much of it with him present) helping Cable battle an invading X-Cutioner, making his first appearance since his debut in last year's annual (and used quite well here: serving basically as someone for the characters to fight without representing a huge threat to them, which is just about the right way to pitch a villain that is, essentially, just a guy with some fancy weapons).

Along the way, Cyclops & Cable hash out some of their issues lingering in the wake of the revelations in Cable #6-8, with Cable angry at Cyclops for (what he believes to be) his clinical decision to give him up as a child, while Cyclops does his best to convince Cable it wasn't an easy decision, and that its haunted him ever since. While the two's issues aren't entirely laid to rest by the end of the issue, they do come to an understanding, with Cable agreeing to come to Cyclops and Jean's wedding. 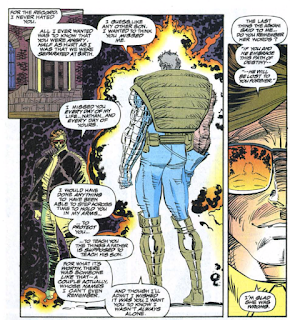 This issue confirms that the White Queen, comatose since her apparent death (and Jean shifting her mind into the White Queen's body) in issue #281, has been recuperating at the mansion, the first step towards her return in issue #314, and subsequent role in Generation X. We also learn her middle name is Grace, for what that's worth (it's also worth noting, given their later relationship together, that Cyclops is key to preventing X-Cutioner from killing Emma in this issue, and even though she's unconscious throughout, it's one of their earliest direct encounters).

Cable hurls a chunk of metal at the X-Cutioner, prompting Cyclops to ask how long he's been that strong; he gives a characteristically-cryptic/flippant response, but later stories would suggest he's using his telekinesis to augment his strength. 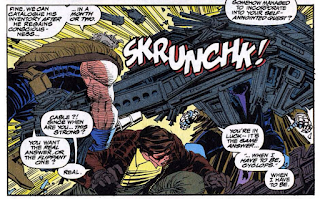 There's a couple lines here which hint at the events of the upcoming Adventures of Cyclops & Phoenix (in which the titular characters end up in the future and help raise Cable without him knowing its them). One is when Cyclops spouts a bit of philosophy at Cable, which seems familiar to him. 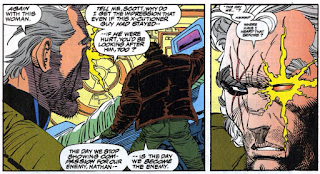 The other comes when Cyclops expresses sorrow that Cable had to grow up alone, and Cable remarks that there was "a couple" who helped raise him, though he can't remember their names.

The panel from issue #308, in which part of Jean's proposal never got lettered into the speech bubble, is reprinted in this issue's letters page, along with an explanation/apology.

A Work in Progress
Thanks to the magic of the Danger Room, this issue features a holographic flashback to the moment when Cyclops handed over his son to Askani, from X-Factor #68 (and props to Romita for remembering that Charlotte Jones was there). 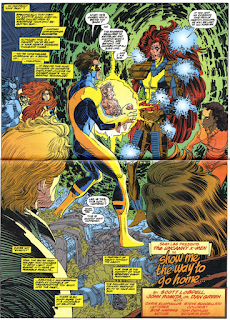 Banshee & Cyclops' dialogue bubbles in that scene are misplaced, though.

In addition to the flashback, we see a new scene this issue, set shortly after X-Factor #68, in which Cyclops tries to log an after-action report and breaks down (it's unclear where or how this scene was recorded, considering Ship was destroyed in the same story that sent Nathan into the future). 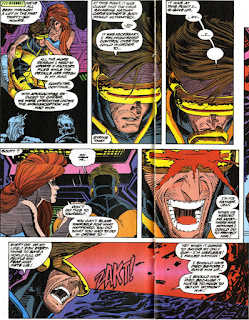 When Cable pops up before Cyclops & Banshee, we get to see Banshee's thoughts on Siryn being a part of X-Force for the first time (he's not too happy about it). 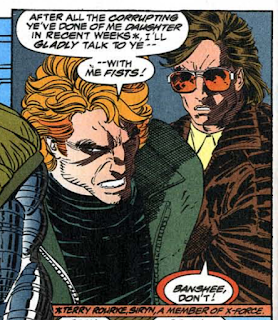 At the bachelor party, there's a great bit where the X-Men give Bishop a hard time about constantly talking about the future. 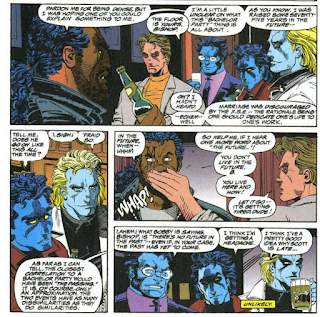 Gambit spends most of the bachelor party obviously (and hilariously) feeling everybody out about Professor X bringing Sabretooth into the mansion. 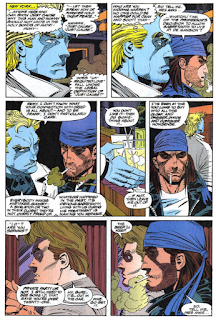 And there's a weird bit with Iceman which seems to suggest he's underage, which really doesn't work, especially since Nicieza has Beast talking about turning 30 over in X-Men (since Iceman could only be, at most, three years younger than Beast. 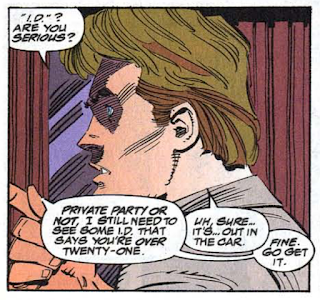 The X-Cutioner is able to piggyback onto Cable's bodyslide in order to get into the mansion. He's also using a Sidrian cloaking device; the Sidrian hunters were the aliens who destroyed the mansion the first time in issue #154. 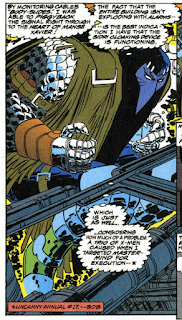 Young Love
At the bachelor party, Archangel jokes that Jean is running out of time to become Mrs. Warren Worthington, a nice callback to the fact that the Cyclops/Jean/Angel love triangle was one of the series' first. 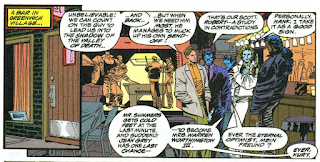 For Sale
There's an ad for Mega Man X (still one of the all-time great games) in this issue, as well as an ad for the Spider-Man/X-Men Sega Genesis game. 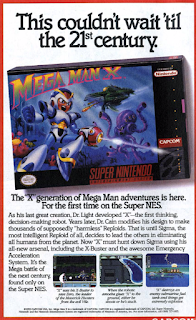 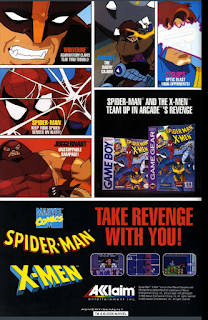 Austin's Analysis
Another in the recent string of "standalone-ish" issues (in that they aren't devoid of connection to other issues/events in the X-universe, but still tell a mostly self-contained story), this one does three things: it introduces X-Cutioner to the series proper (after his debut in last year's annual), it features Cyclops' bachelor party, making it part of the run-up to the big wedding in X-Men #30, and it puts Cyclops & Cable in a room together in order to tackle some of their issues, in the wake of recent revelations over in Cable's solo series, via that time-honored comic book tradition: by teaming up to clobber on a villain.

That latter element really shows how in-synch Nicieza & Lobdell are at this point in time. While, once again, for anyone not reading every possible corner of the X-universe, the way in which certain information is presented with little explanation (here, the recent confirmation that Cable is Cyclop's son) must be maddening, but for those who are reading everything (or, in this case, at least Cable along with Uncanny), the fluidity of plot & character development between series is remarkable. After Nicieza confirms the Cyclops/Cable relationship once and for all in Cable #8, here, the next month, Lobdell picks up that ball and runs with it, giving the two characters a chance to discuss what that means in the context of their current lives and somewhat come to terms with the recent revelations. While I certainly wouldn't have objected to another full Lobdell Quiet issue that just presented Cyclops' bachelor party, or a lengthy Cable/Cyclops heart-to-heart, after two relatively quiet "talk-y" issues, its understandable that someone (Lobdell, Romita, Harras, whomever) wanted a little action, and having Cyclops & Cable hash things out over a battle with the X-Cutioner (which gives JRjr, who has always drawn a really great Cable, a chance to cut loose, filling the pages with crackling Kirby-esque energy) kills a couple of birds with one stone.

So while this issue is definitely more action-packed than the previous two, and the bachelor party, a few genuinely funny moments aside, mostly takes a back seat to the Cable/Cyclops/X-Cutioner stuff back on the mansion, it's still an appropriate conclusion to the loose trilogy of issues focused on the upcoming wedding between Cyclops & Jean Grey that began in issue #308, while also showcasing, for better and worse, just how interwoven the X-books have become, and how easy it is for plot and character elements to pass from book to book.