Game of Thrones 3x09: The Rains of Castamere 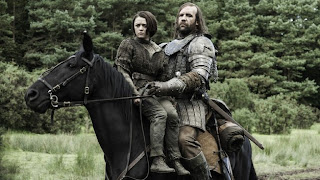 So, not a great time to be a Stark, amiright?

It's not often that a show surprises and shocks me to the extent this episode did. When it happens, it's usually just based on the sheer quality of an episode, or because a show did something I wanted it to do but feared it never actually would (like killing off a certain character on a certain zombie show). But the ending of this episode, particularly the death of Catelyn, was probably the most shocked I've ever been on this show (Ned's death I knew about long before this series was even a gleam in HBO's eye. Work in a bookstore with people who read fantasy long enough and you pick up on a few things, like "Ned dies unexpectedly early" and "Tyrion is awesome").

Anyways, let's get to it.

The Twins
I've had a bad feeling about Robb for a long time (basically, ever since he married Talisa, which is part of why I've never liked her), and when he seemingly got off easy earlier this season for breaking his oath to Walder Frey, my trepidation grew. That tension was ratcheted up even further in the opening moments of this episode, as his dependance on Frey's troops and the question of whether Frey would comply despite the new arrangement was made clear, but even then, I figured Robb was heading for a disastrous turn on the battlefield, something where Frey's troops would leave the field of battle or turn on the Starks at a critical moment. I wasn't expecting a full scale massacre at the wedding.

And even then, I found Catelyn's death more shocking than Robb's or Talisa's. In part because I know Robb isn't a POV character in the books (while Catelyn is), in part because the idea of Robb avenging his father and living on as King of the North just seemed too easy for this story, and in part because Catelyn felt safer: with Ned dead, she felt like a necessary representative of the "older" Stark generation, she was from a still-powerful house (as opposed to the weakened Starks) and connected to the Vale of Arryn and Littlefinger and, frankly, because she was a mother.

In hindsight, the conversation between Robb and his mother in the beginning, when he asked for her advice, was an even deeper moment for the two of them. At least she died knowing her son had forgiven her.

Arya drawing ever closer to a reunion with her family also lent itself to the foreboding atmosphere, as I continue to very much feel what the Hound described Arya as feeling, that she's somehow destined to wander Westeros, coming close but never actually coming into contact with her family.

The entire Red Wedding (as my brother tells me its called) was marvelously paced, but the breaking point came when Robb and Talisa were discussing "Baby Ned"; amidst the odd atmosphere of the wedding, that conversation more or less signaled their end. And frankly, as much as Talisa wisely showed restraint in not making kissy face with Robb at the reception, it was pretty stupid of him to bring her at all, considering why they were there in the first place.

I really hope we see some fallout from Frey's new son-in-law, unless he was killed as well. Plus, the show seemed to make a point that Blackfish left the hall before the massacre, so hopefully he's still around to get some revenge on the Freys.

Also, Baelish is gonna be hella pissed when he finds out about this, and he now technically has the power to do something about it.

Man, Roose Bolton is as much a bastard as his bastard.

Also, I hate to break it to Arya, but two blows to the head strong enough to knock a man unconscious in as many minutes is, realistically, almost as deadly as the Hound just killing the pig farmer outright.

Yunkai
And with that, Daenerys sacks another city and frees another load of slaves. While I'm not surprised the show kept the actual sacking of Yunkai offscreen, I did appreciate the little action sequence we got when Daario, Jorah and Greyworm snuck in the back gate, particularly for the way it showcased the different fighting styles of the three men.

I was expecting a (irritating) fight between Jorah and Barristan over Barristan's desire to infiltrate the city alongside Jorah, so I appreciated that common sense prevailed and Barristan quietly accepted his place as the Queensguard.

On the Road/Up North
In addition to Arya getting this close to her family, we got another bit of rare interconnected plotlines as Jon and Bran end up in roughly the same place for the first time since, what, the first episode of the series?

We also got some much needed forward momentum on Bran's story, as he grows more powerful in his Warg abilities (he can now take control of animals somewhat by choice, and was also able to take control of Hodor, presumably because his mind is more simple than most humans). He also makes the decision to send Rickon, with Osha, to relative safety while he continues north with the Reeds. As much fun as Osha can be, I won't complain if we don't check in on her and Rickon much moving forward (and frankly, hope that we don't).

Jon, meanwhile, reaches a breaking point in his alliance with the Wildings, as he refuses to kill a farmer who breeds horses for the Night's Watch in cold blood, which somehow makes the Wildlings think he's still a Crow, thus forcing his hand.

The impetus of Jon's "betrayal" could have been handled better, even within the same circumstances. I mean, an unwillingness to kill in cold blood doesn't have to mean Jon's a Crow - it could just mean he doesn't want to kill needlessly. Aren't the Wildings supposed to be about freedom and choice and living your own life? While the circumstances and end result make sense (Jon refuses to kill, the rest of the Wildlings turn on him), Jon didn't plead his case very well, and the motivation for their turning on him seemed muddied and forced.

I'm also bummed that Jon left Ygritte. I get why he did it (and appreciate the fact that he tried to knock her out of the fight early and keep her from getting targeted by the rest of the Wildings), but it's still disappointing. Not just because I like Ygritte, but because a Jon who is torn not only between the Wildlings and the Night's Watch but between his feelings for a woman and his duty makes for a far more compelling character than a Jon who just steadfastly does what's "right".

In one of this episode's few "place setting" bits, we also get a brief check-in with Sam and Gilly, as the former impresses the later with his book smarts. Remember kids: reading books makes you a wizard!

Other Thoughts
As with the last episode, this one benefited from a remarkably narrow focus, covering, essentially, only three locations and leaving everything else out. Thought the thematic connections between scenes wasn't quite as strong as the previous episode, it remains a pleasure to see the show willing to narrow its focus in this way.

As a result, I believe this was the first episode since the location was introduced that we didn't check in at King's Landing. We also didn't get anything from Dragonstone, Jamie/Brienne, or Theon.

I absolutely love that Ned forbade a bedding ceremony at his wedding. How very Ned Stark.

Enough with the killing of the direwolves already (yes, I know it's cliche to be more upset by the death of animals than all those humans who were massacred, but still)!

My brother and the internet tell me that the title of the episode shares its name with the Lannister victory song Cersei mentioned to Margaery last week, which was the more dirge-y song that began to play as the doors to the wedding reception were closed (it was also the song sung by Bronn and his men prior to the Battle of Blackwater last season). It apparently commemorates a younger Tywin Lannister's complete victory over some rebellious bannermen back in the day.

It's amazing how this show continually manages to one-up it's dickery. At the end of the first episode, you want Jamie to get some comeuppance for what he did to Bran. Pretty soon, you've forgotten about that because Joffrey is such a dick, then because Tywin is so cold and mercenary, and now I just want Walder Frey to get torn to pieces. As my brother has often said, pretty soon pushing a kid out a window doesn't seem so bad, relatively speaking...

So that's pretty much it for the Lannisters, right? They've won. Renly's dead. Stannis is beaten, licking his wounds at Dragonstone (for now). Robb is dead, which pretty much ends his rebellion, and with Sansa part of the family and Arya, Bran and Rickon missing and/or presumed dead, the North pretty much belongs to the Lannisters as well. Dany remains a threat, but she'll be busy freeing slaves for awhile. No wonder I've heard this book referred to as  the The Empire Strikes Back of the series (and it's not even half over yet).

Only one episode left this season. Anything following the intensity of this one is going to feel  like a letdown, but hopefully Benioff and Weiss have a few tricks up their sleeve to keep it from being a complete decompression episode, especially since it really just marks the halfway point of this particular chapter of the story.
Newer Post Older Post Home
Posted by Austin Gorton at 8:00 AM