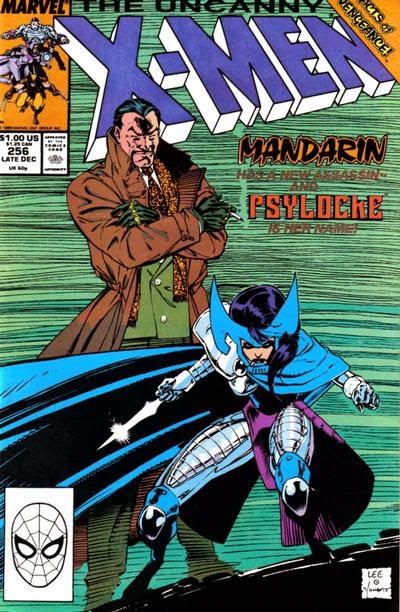 "The Key That Breaks the Locke"
Late December 1989

In a Nutshell
Psylocke is transformed into an Asian ninja assassin by the Hand.

Plot
Having killed his guards, Matsuo Tsurayaba confronts the Mandarin in Hong Kong, offering him the services of the Hand. Elsewhere, Psylocke experiences a bizarre, shifting reality in which she's stalked by Mojo and Spiral as she relives moments from her past, growing older in the process: playing with her brother Brian, joy riding with her brother Jamie, and reconnecting with Dough Ramsey. Along the way, she picks up a series of rings. Eventually, she enters a salon called the Body Shoppe and is reunited with Storm before Mojo and Spiral transform her into an Asian woman. In reality, she is being held by the Hand. Her mind fractured by the Siege Perilous, one of the Hands' psychics works to reshape her mind as it heals, making her a loyal assassin, whom Matsuo offers to the Mandarin. 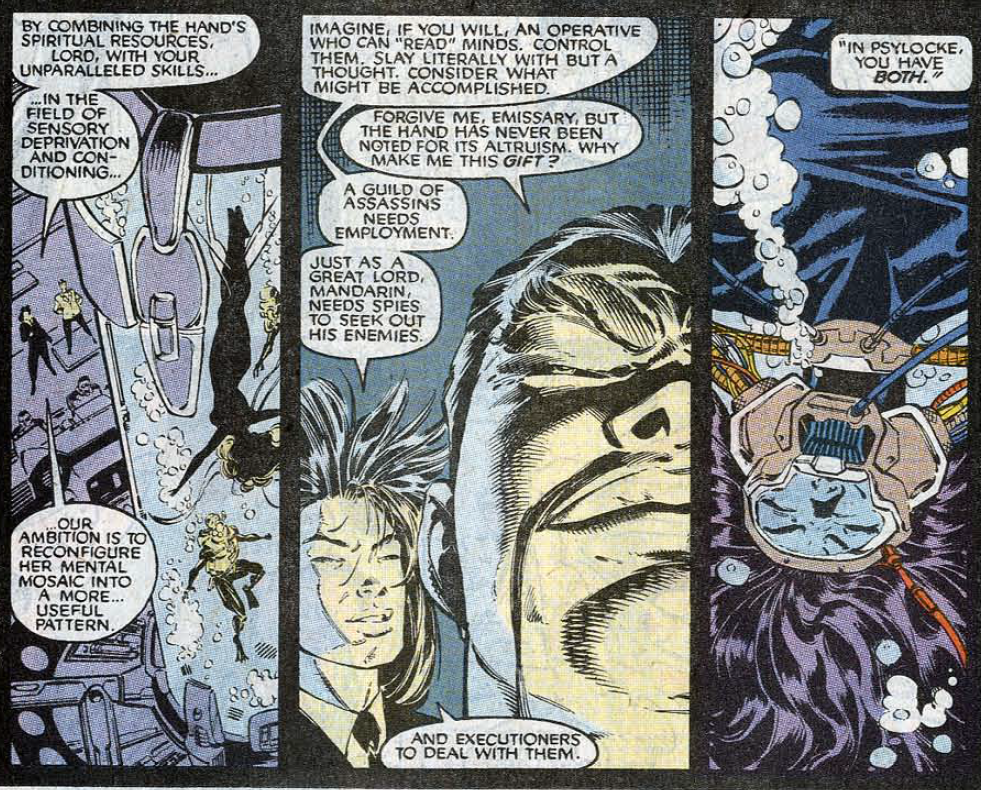 Back in her mind, Psylocke encounters the rest of her teammates, slaying them all in order to acquire one of the Mandarin's rings from each, before facing her old foe Slaymaster for the final ring. Slaymaster then transforms into the Mandarin, whom Psylocke defeats. When he orders her to acknowledge him as her lord and master, she refuses, and telepathically blasts him, much to Mojo and Spiral's delight. In the real world, however, the Hand psychic is now dead, and Psylocke kneels before the real Mandarin. She swears loyalty to him, but hides from her new master an insane smile.

Firsts and Other Notables
This issue is the first appearance of "Hot Asian Ninja Psylocke", as the post-Siege Perilous Betsy is transformed into an Asian assassin by the Hand in order to serve as the Mandarin's chief enforcer. Ninja Psylocke is up there on the X-Men Mount Rushmore of characters who signify the sensibilities of comics in the early 90s, both for the way the character is given a makeover to work more stereotypically "kewl" traits into her characterization, and for the way the already complicated process of transforming her into a ninja assassin is further complicated via later retcons (basically, Fabian Nicieza later establishes that Psylocke's body wasn't physically transformed; rather, her mind was placed in the body of an existing ninja assassin, while the assassin's mind went into Psylocke's original body). 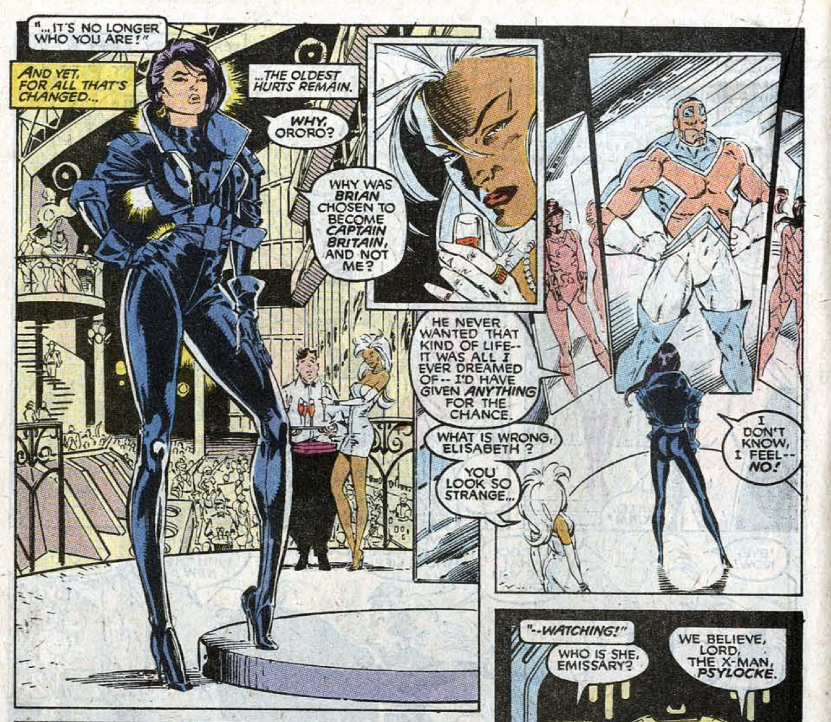 Ninja Psylocke's signature bathing suit costume and random arm & leg straps/bandage/ribbon look also debuts this issue, and will, barring some subtle variations, remain her default look pretty much throughout the entirety of the 90s, putting her in the company of such other X-Men as Havok, Polaris and Archangel in continuing to wear a costume she initially received from a villain. 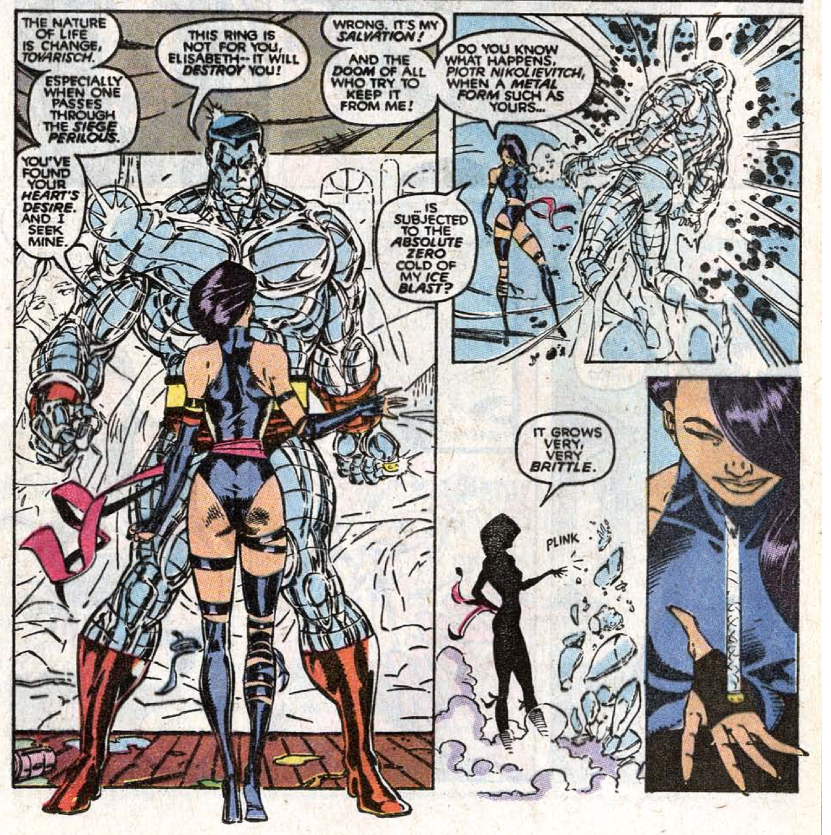 This issue kicks off Uncanny X-Men's contribution to "Acts of Vengeance" and to that end, features Iron Man villain (and one of the Prime Movers) the Mandarin, here depicted in a more restrained business suit as opposed to the shiny metal armor he wears in the Avengers tie-in issues, though allowing for the fluidity of time in comics, I don't think there's anything in either of his appearances that directly contradicts the other.

Jim Lee is back on art, filling in once again for Marc Silvestri. He'll pencil the entirety of this story, then hand the book back over to Silvestri, who will stick around for a few more issues before leaving the series to pencil Wolverine, after which we'll get a bunch of lackluster fill-in art on this title before Lee returns, this time as the series' new regular penciler. I'm not sure exactly when it was decided to make Lee the new regular artist, but it was probably after this story, though I wouldn't be surprised if he was given these three issues with the idea in mind of giving him the book full time, with this story serving as a tryout of sorts.

Lee is inked by his frequent collaborator Scott Williams, a partnership that will continue throughout most of both artists' careers, including this series, as Williams will become the new regular inker when Lee becomes penciler.

During Psylocke's hallucination/brainwashing/conditioning/whatever in this issue, she encounters the X-Men who entered the Siege Perilous one after the other, and each encounter foreshadows the state of the character when next we'll see them, post-Siege (possibly a nod to her earlier precognitive abilities): Colossus is living his hearts desire as an artist, Dazzler is a star in Hollywood, Havok is in Genosha, and Rogue has had the Ms. Marvel portion of her psyche excised. 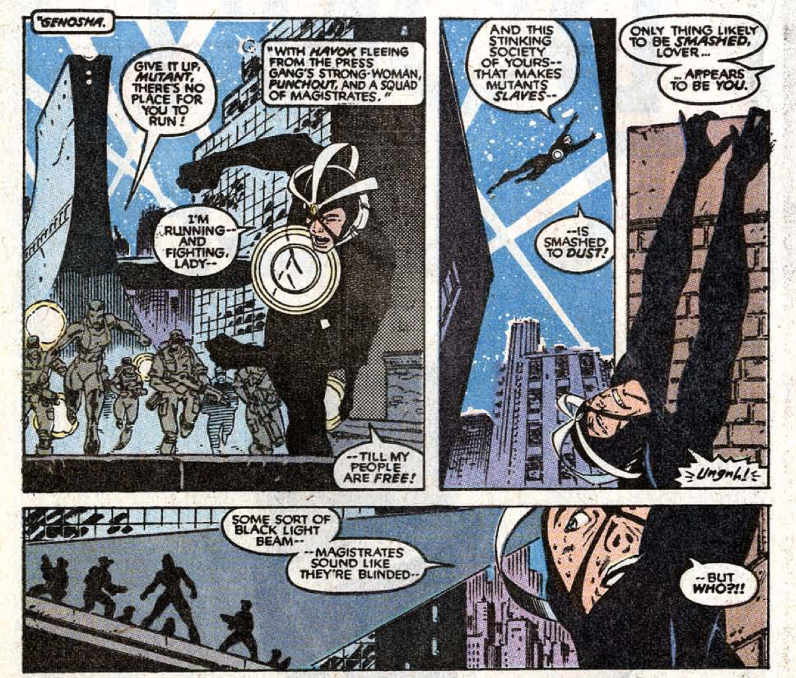 Throughout this issue, representations of Mojo and Spiral are seen hanging out in Psylocke's mind, and by the end of the issue, Mojo is promising to provide Psylocke with new inner eyes. It's implied that Spiral and her Body Shoppe played a role in the physical transformation of Psylocke, but that idea and the presence of Mojo never really get followed up on in this story, and it's entirely possible to read their presence as existing only in Psylocke's mind (a la Slaymaster and the other X-Men), especially given Psylocke's history with them. However, Nicieza's later retcon does follow up on their presence, and officially makes Spiral a part of the process that transforms Psylocke, and both characters are considered to have actually appeared in this issue. 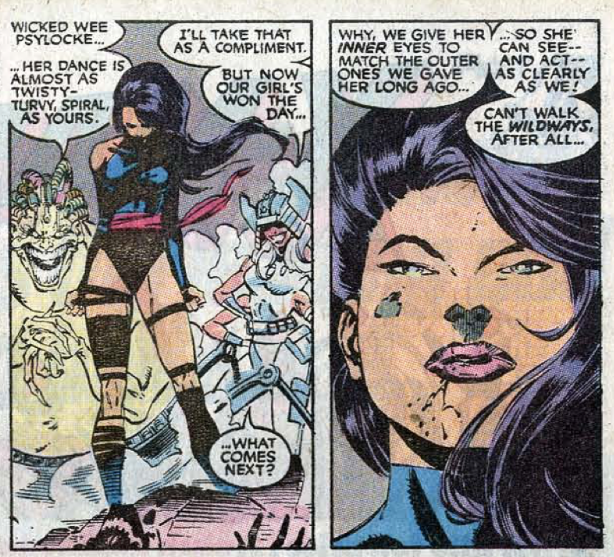 For whatever reason, back in the day, I was able to get a hold of a copy of this issue at a reasonable price, whereas the next two chapters of this story remained elusive for much longer thanks to my tied-to-an-allowance income and their higher price. As a result, I've read this issue countless times through the years, whereas I've probably only read the next two issues twice, at most.

A Work in Progress
Matsuo says the Hand slogan is "whatever the fate of one hand, a man may still rely on the other" a la Hydra's "cut one off one head and two will take its place" schtick, though I'm not sure if that is something Claremont made up for this issue or if it was lifted from somewhere else (like a Frank Miller Daredevil issue). Either way, it's much less ubiquitous than the Hydra slogan (and less menacing. I mean, ultimately, most people only have two hands so the slogan is only true for awhile). 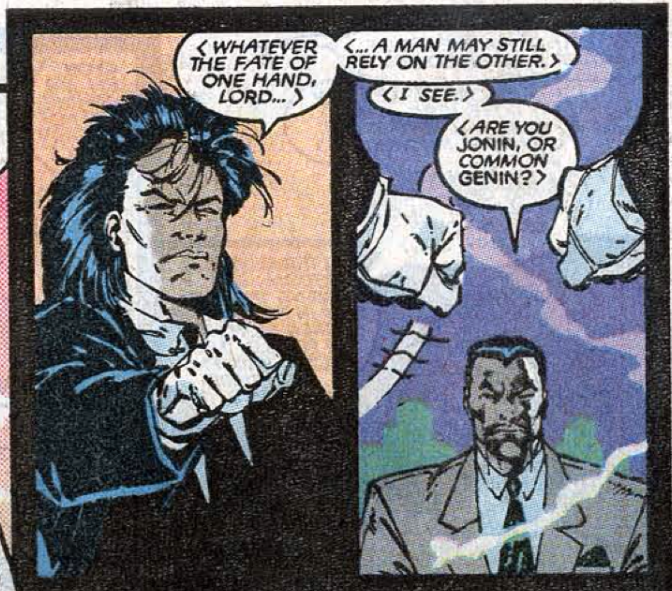 Betsy's memories gives us a glimpse of bookish young Captain Britain and tomboy Psylocke, as well as their older brother Jamie (who recently made his first appearance in Excalibur in the present day). 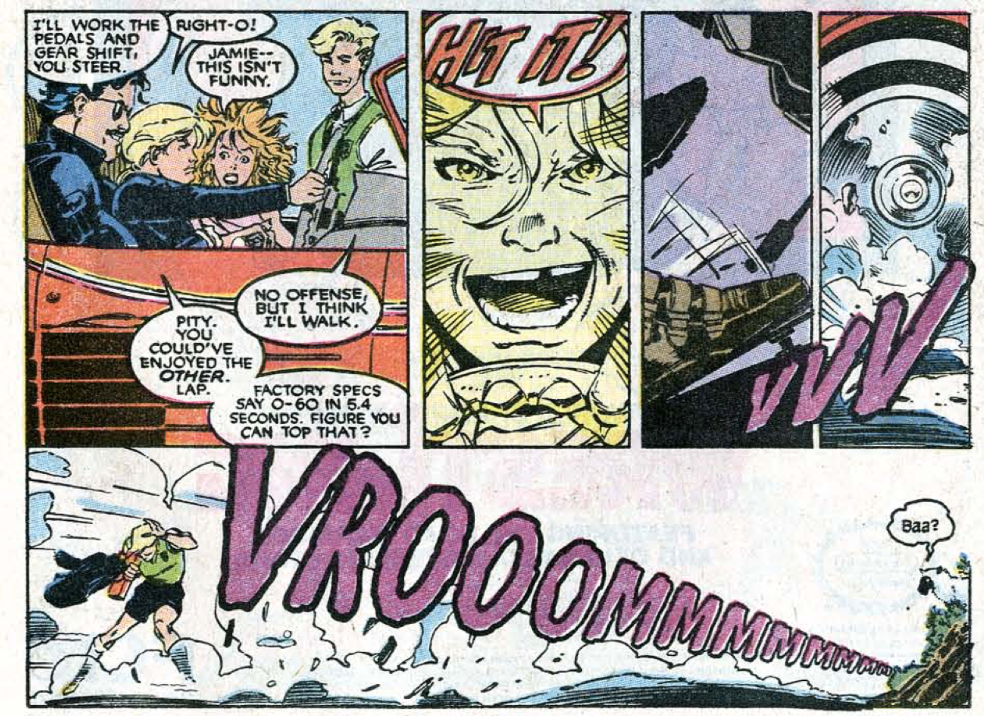 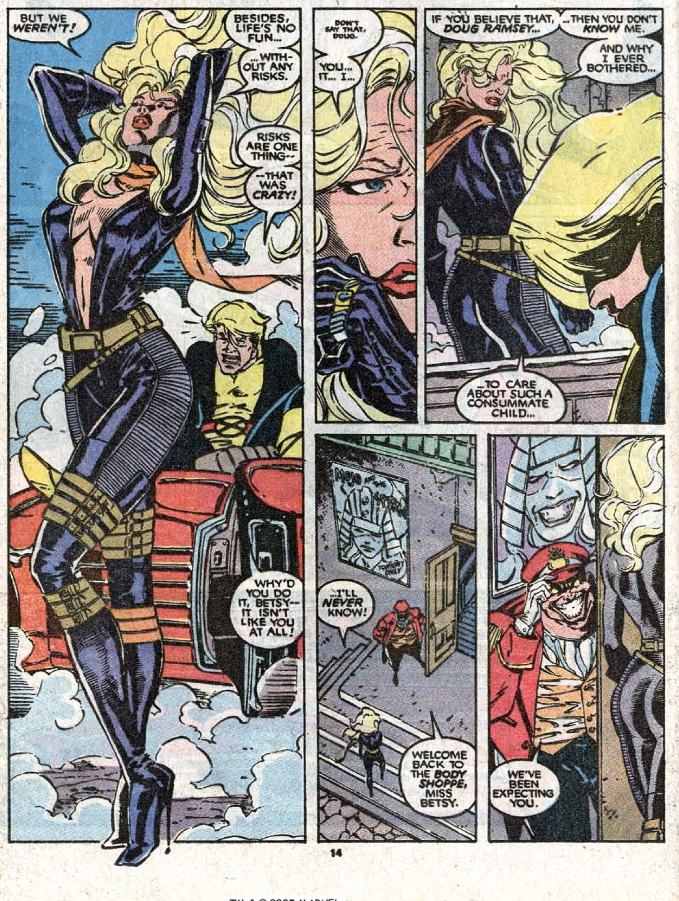 As is her brief time as Captain Britain, from that character's solo series. 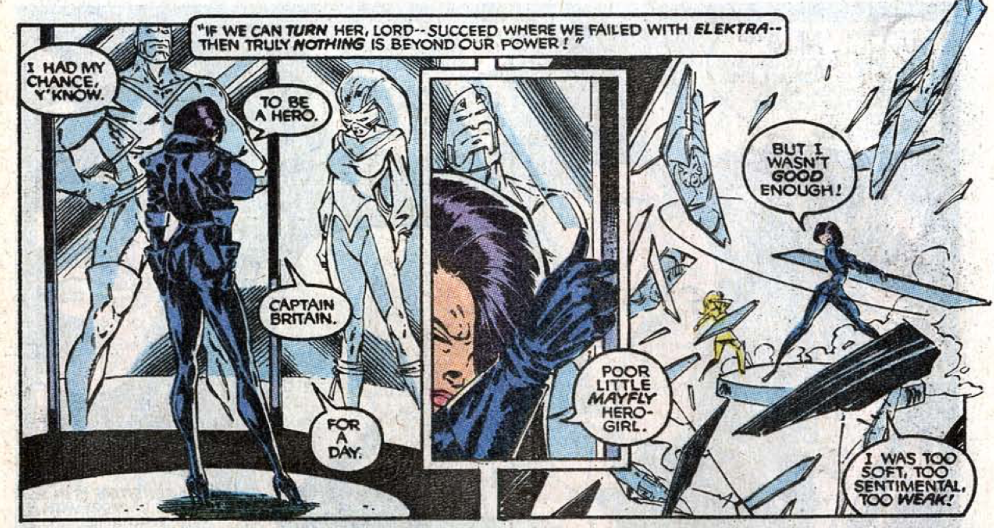 Finally, Psylocke encounters Slaymaster, the villain who blinded her (which allowed Mojo to replace her eyes with bionic ones), whose appearance in this issue represents the only time this reader has ever actually encountered the character. 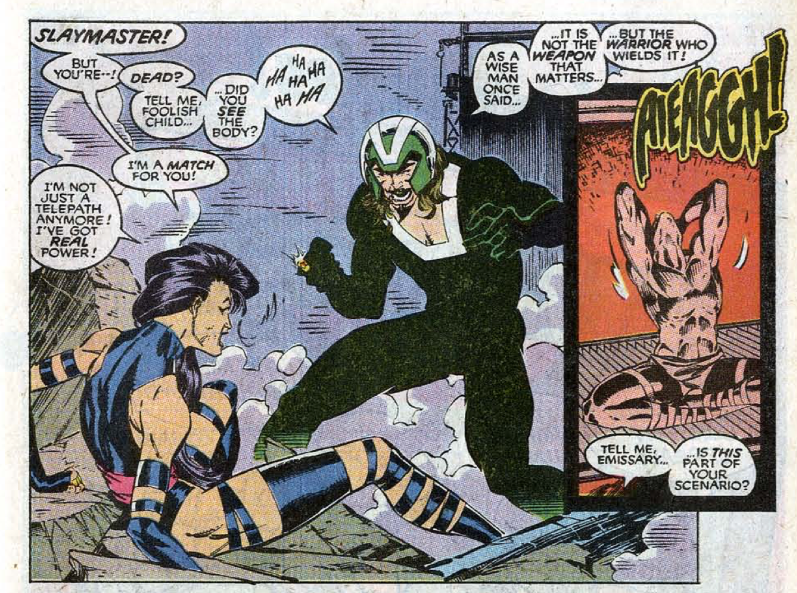 Claremontisms
Young Betsy gives Claremont a chance to spout off about airplanes for a panel or two. Lots of "body and soul" going on in this issue, too, not surprisingly. 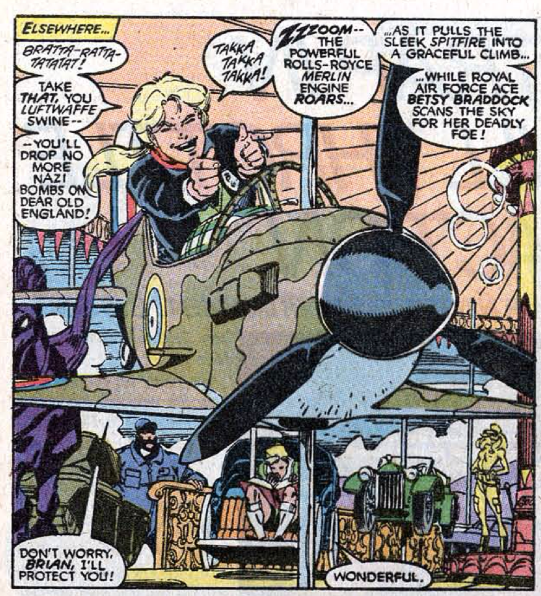 For Sale
There's an ad for Castlevania II: Simon's Quest in this issue, one of my all time favorite NES games. 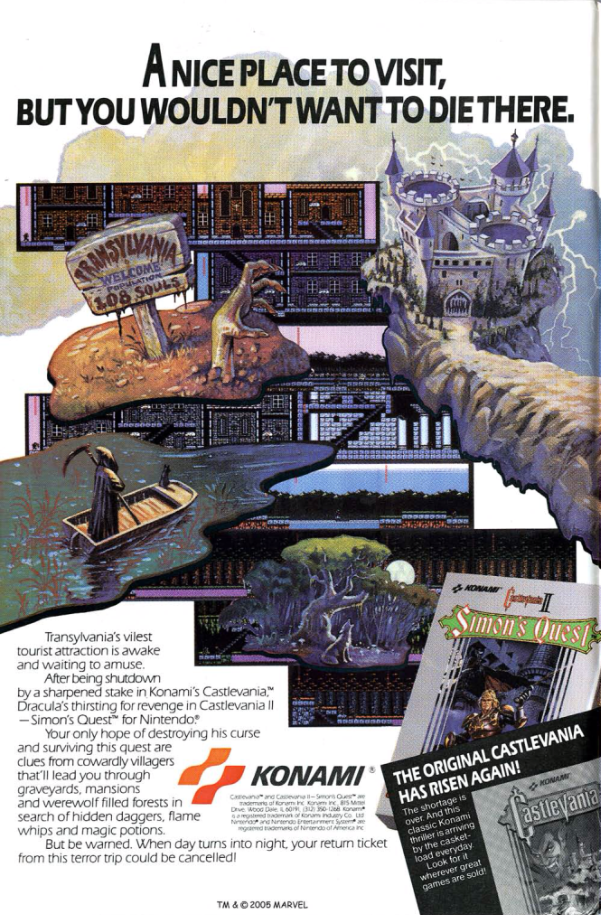 In fact, the vast majority of ads in this comic are for video games or video game products, a testament to the late 80s resurgence of the video game market following the '83 crash. One of the few non-video game ads is for the Teenage Mutant Ninja Turtles cereal, something else very much of its time. 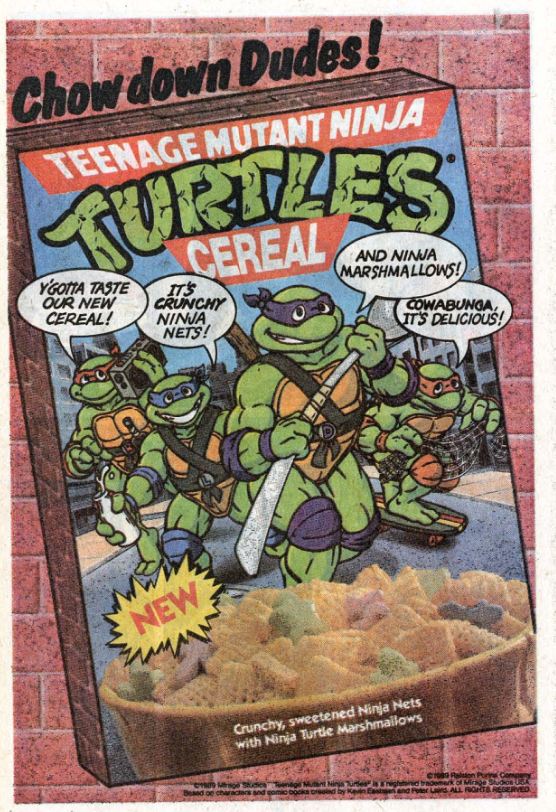 Teebore's Take
The final issue of the series with a cover date in the eighties (it was technically on sale a few months earlier in 1989), this issue and the story it kicks off can be read as a sneak peek at the X-Men of the early 90s: Jim Lee, Ninja Psylocke, a big role for Wolverine & Jubilee. But for all that (and the generally accepted notion that Jim Lee just wanted a hot Asian woman to draw), it's also still very much a Chris Claremont comic, featuring as it does the physical transformation of a strong female pet character being mind controlled, and it's worth remembering that Psylocke craving to be more of a physical warrior has been a consistent part of her characterization for years, making the change somewhat less egregious than if it was, say, Dazzler. There's also some dicey racial things going on as well, as Psylocke is transformed under the auspices of the Mandarin (a character with his own troubling racial depictions over the years) into a completely different race, a transformation which never really gets properly explored, here or elsewhere.

But putting all that (admittedly heavy) baggage aside, this issue on its own terms is actually really effective. It's much more surreal and metaphorical than one would expect from the Jim Lee-drawn introduction to one of comics' early 90s poster children, opening in media res and taking place mostly inside Psylocke's mind, resisting the urge to spell out for the readers exactly what's happening. For anyone who hadn't read Captain Britain's solo series, this also represents the most direct look at Psylocke's family and backstory the series will ever provide (it was, for many years, the only place I'd ever seen Jamie Braddock outside a trading card), something which helps reinforce the notion that there's more to Psylocke's transformation than a quick attempt to make an existing character more stereotypically kewl.

Next Issue
Tomorrow, the plot finally moves ahead in New Mutants #84, followed on Friday by the penultimate issue of "Judgment War" in X-Factor #49. Next week, "Acts of Vengeance" continues in a bunch of different places.