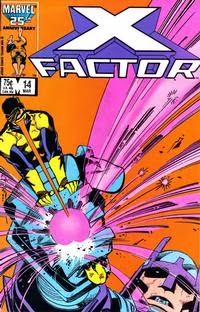 In a Nutshell
Cyclops vs. Master Mold.

Plot
In Alaska, Master Mold is drawn to Cyclops, just as a pair of police officers arrive at the site of his destroyed home. Suspecting Cyclops of blowing up the house, they arrest him. In New York, Jean and Bobby leave to visit Warren in the hospital, leaving Hank to oversee Boom-Boom's training session, much to her disappointment. In Alaska, Master Mold attacks Cyclops, killing one of the police officers in the process. His glasses knocked off by Master Mold's attack, Cyclops is able to convince the other cop to give him his visor, allowing him to fight back. In New York, reporter Trish Tilby suddenly bursts into Warren's hospital room, demanding to know the truth of his involvement with X-Factor, but Jean and Bobby are able to shoo her out. The commotion, however, causes Warren to pass out. In Alaska, Cyclops and the remaining cop are chased by Master Mold into an oil refinery. 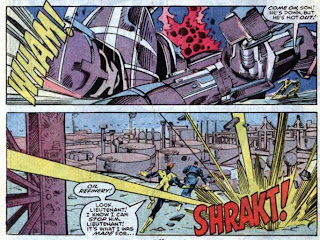 Though Cyclops is able to destroy most of Master Mold's body, the robot continues his attack, forcing Cyclops to lure him between two oil tanks, at which point Master Mold accidentally ignites the tanks, seemingly destroying himself. The surviving police officer helps Cyclops free of the wreckage, and agrees not to arrest him, telling him there's something back at the station he needs to see. In New York, Bobby and Jean receive word from Warren's doctor that a court has declared Warren legally incompetent, granting the hospital, in the absence of any living relative, the right to take whatever measures they deem necessary to preserve his life. To that end, the doctors have begun to surgically remove his damaged wings.

Firsts and Other Notables
Already badly damaged and infected, Angel loses his wings in this issue, as a court order is handed down giving the hospital authority to amputate the wings in an effort to save Angel's life. 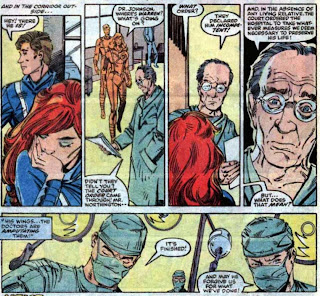 The Twelve subplot gets fleshed out more, as Master Mold identifies five of the Twelve: Cyclops, Marvel Girl, Storm, Franklin Richards, and Apocalypse. With Master Mold's destruction in this issue, however, the subplot largely goes unreferenced until it's dusted off in the very late 90s, at which point these hints will be mainly forgotten/ignored (Apocalypse, for example, is ultimately established as not one of the Twelve, but merely someone who wishes to harness their power, a detail that has always driven me batty. It's right here in this issue! Apocalypse is ONE OF THE TWELVE!). 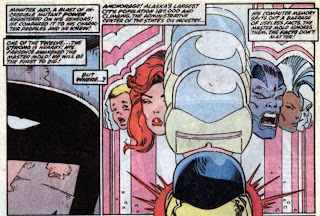 A Work in Progress
Master Mold's programming has evolved to the point where he believes everyone is a mutant, leading him to target just about anyone in proximity to him.

Rusty and Skids get kind of snippy over X-Factor's hero worship of Professor X.

Trish Tilby pops up again, storming into Warren's hospital room in order to try and get to the bottom of his involvement with X-Factor. 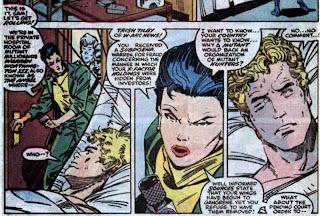 Young Love
Boom-Boom, who doesn't believe she needs training, is bummed when Hank replaces Bobby in her scheduled training session. 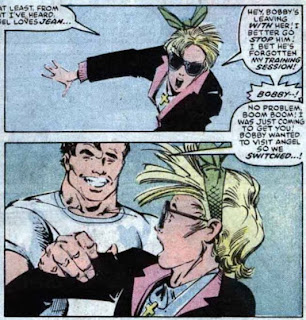 Rusty is still mooning over Jean, even though Skids is right there. 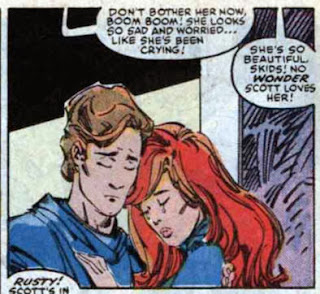 Teebore's Take
Following on from last issue, this issue is essentially one big fight between Cyclops and Master Mold. Thankfully, "guy shooting laser blasts at a giant robot" fits squarely in Walt Simonson's wheelhouse, and he cuts loose, injecting the proceedings with a ton of energy, clever panel layouts, and unique camera angles, milking the action for as much excitement as possible. Louise, meanwhile, manages to advance a few of the book's simmering subplots, notably in the cliffhanger ending which finds Angel's wing removed by court order, but her most important contribution to the issue finds Cyclops, still not-quite-right in the head following the disappearance of his wife and son, hallucinating Professor Xavier throughout the battle, drawing explicit parallels between the robotic Master Mold and the end result of Cyclop's training at the hands of Xavier.

This add an interesting twist to all the fight scenes: Master Mold becomes the embodiment of everything that has led Cyclops to this point, where he's broken, alone, with nothing but his ingrained sense of duty. Blasting away at Master Mold thus becomes a way to blast away his problems, and while Master Mold is ultimately defeated, Cyclops' problems, of course, remain. The end result is nonetheless cathartic, a prime example of superhero comics' ability to make external the internal conflicts of its characters.  All that said, this is still Walt's time to shine, but by adding this context to the big action centerpiece, the end result is one of the series' most energetic and visceral issues yet.

Next Issue
Storm fights for her life in Uncanny X-Men #216, followed by more Xavier/New Mutants fun in New Mutants #51 and the fate of Angel in X-Factor #15.
Newer Post Older Post Home
Posted by Austin Gorton at 8:00 AM