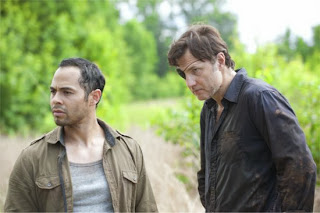 Well, when a person is wrong they have to admit they were wrong. Me? I was wrong. So this Thanksgiving week the bird I’m apparently eating is crow.

After last week’s episode I lambasted The Walking Dead for trying to redeem the (in my opinion) unredeemable Governor. It’s honestly where I thought the series was headed. Instead, by the end of this episode the Governor is back to being his old, villainous self. However, that just makes me ask this question: What was the point of the last two episodes?


In the comments section of last week’s post Matt noted that it looked like this episode would again be Governor-centric. He was right. He was also right that this was a bold move.
This is the second straight episode that didn’t have any of the regular cast (aside from a cameo at the end of this episode). The regular group’s absence speaks to how much the writers love the Governor. Or, at least how much they think the viewers love the Governor.

Regardless of motivation this episode featured the Governor and his new family settling into a trailer park with a new group headed by his former underling Martinez. The Governor proves his worth and seems willing (if not a bit reluctantly) to simply remain in the background. However, once Martinez offered the Governor a share of leadership the Governor quickly dispatches of Martinez.

My initial reaction to this was that the Governor was so afraid of being of a leader again that he killed Martinez for even suggesting as much. (Which, if you don't want to be the leader how about you, you know, not kill the current leader?) However, he later kills Pete, the new leader of the camp, because Pete wasn’t ruthless enough. Then the Governor anoints himself as leader. Either the Governor made a quick about face or he killed Martinez because Martinez knew too much about the Governor. I don’t know. I can’t keep track of why the Governor does the thing he does. I don't think the writers can either.

Anyway, the Governor is the new leader and decides the trailer park is unsafe. Where is a safe place? The prison Rick and Co. are living in, of course! Now he’s, presumably, planning on taking it over the new group.

This episode was fine enough (the Governor’s inconsistent craziness aside) but I bring up my original question. What is the point of these Governor-centric episodes? The Governor ended up right where he started.

Let’s assume next week’s episode is the inevitable confrontation between the Governor’s camp and Rick’s prison. If we never saw these episodes and the Governor just showed up with a group of new people ready to take over the prison the viewers could have connected the dots. Sure, the story in my head wouldn’t be the exact same as theirs but, in much the same way we didn’t need to see Rick and the group fortify the prison, create a council and bring in new people, we don’t need to see the Governor enter a new camp, assume leadership over it and convince it the prison is the best place to live. That’s all plausible enough of its own.

I’m not saying devoting an episode to a single character’s journey is necessarily a bad thing but when that character ends up in the exact same place as where they started it does feel they're spinning their wheels. I'm not saying it's impossible to make the concept work but it has to be a hell of a story. This was just a passable story.

We did get introduced to some new characters, so that’s something. However, they’ll have to do something amazing in the next episode to convince me that whatever happens between the Governor and the prison in this “mid-season finale” isn’t what should have happened at the end of last season.

Other Thoughts:
I’ll be honest. As soon as I saw the Governor was standing next to a tank I had a strong feeling that I’d be eating some crow.

So the Governor’s dad was strict at best and abusive at worst. Is it just me or is every character in fiction’s dad strict-to-abusive provided they’ve been dead for a while before the narrative starts and they're not pertinent to the story. Of is that just for male characters' dads...just thinking out loud...or in type.

I figured the house with the corpses outside with signs nailed to them would be inhabited Kevin Spacey.

The people in the camp were sitting around getting drunk. I’m conflicted. On the one hand, you can’t stop living your life and having fun or what’s the point of surviving? On the other hand, would you really want to be drunk when zombies are everywhere? Maybe they had sufficient guards around the perimeter. Let’s just hope a giant hoard doesn’t come rambling through.

Let Martinez be a lesson to us all. When we have seen somebody casually open fire and slaughter their own people simply because that person was angry maybe it’s best not to turn your back on them while they’re holding a golf club.

Speaking of which, I don’t like seeing anybody get hit in the head with a golf club for any reason under any circumstances...period.

Why does the camp have pits full of zombies? Maybe they’re zombie traps but then maybe they should do a better job of cleaning them out?

So how did that group of people get slaughtered and have their food stolen with the Governor and the two other guys not hearing anything?

The "avoid all strangers, protect the camp at all cost" mentality always seems so narrow minded. And it's always espoused by people who once strangers themselves.

How did that zombie not get a bite in on the little girl? I know, I know…”plot.”

So the Governor kills Pete and dumps him in a lake but never stabs him in the head? It’s a good thing Pete didn’t turn into a zombie while the Governor was carrying him.

If this show was Heroes, the start of the next episode would feature the same shot this episode ended with of the Governor aiming his gun at Michonne but now she'll suddenly be standing behind a vehicle and the Governor will no longer have a clear shot. (No explanation will be given as to why that is the case...and the Governor's patch would be on the wrong eye.)

I predict that if there are going to be any really big deaths in the next episode it’s going to be Glen. I feel like that would give the show the most “bang for its buck.”
Newer Post Older Post Home
Posted by Dr. Bitz at 3:05 PM