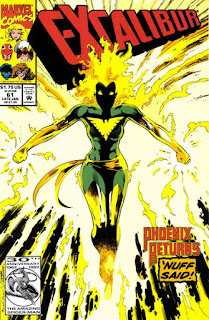 In a Nutshell
Phoenix battles Galactus

Plot
Traveling through space, Phoenix encounters Galactus in the midst of preparing a planet's energy for consumption. Determined to save the planet's life, Phoenix destroys Galactus' apparatus, triggering a fight between them. On Earth, Nightcrawler & Captain Britain are training, but Nightcrawler gets the better of Captain Britain, who admits he's still upset about Sat-yr-9's killing of Courtney Ross. Meanwhile, radio DJ Scott Wright is attacked. He is secretly Micromax, and though he manages to fight back, he's eventually knocked out. At Braddock Manor, Kitty and Feron try to restore the Mastermind computer in the building's basement, but are interrupted by another brief appearance and disappearance of Widget. At the Braddock summer cottage on the coast, Brian proposes to Meggan, unaware they are being targeted from afar. Back in space, their battle still raging, Galactus stuns Phoenix with the knowledge that her energy is derived from the energy of unborn life. Back on Earth, Kitty receives a call from Alistair, who says he's discovered who framed his sister and has infiltrated the RCX headquarters. However, before he can say more, he's knocked out from behind.

Firsts and Other Notables
This issue marks the return of Phoenix to the series, though at this point, Phoenix the cosmic entity is still in full control of Rachel Summer's body, and Rachel herself remains dormant. 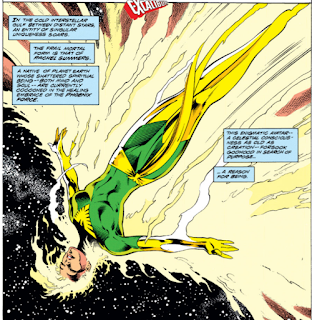 The centerpiece of this issue is the battle between Phoenix and Galactus, during which the pair debate their relative merits as cosmic beings. In the process, Alan Davis continues to expand the mythology surrounding the Phoenix Force, most notably via Galactus' assertion here that she's powered by unborn life. 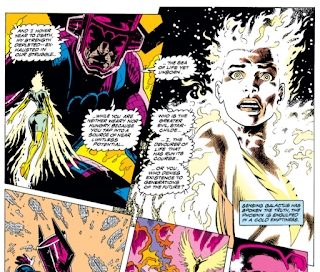 Captain Britain proposes to Meggan this issue; though she accepts and the pair do eventually get married, it won't be until the series final issue, #125. So in the end, they'll be engaged for more issues of the series then not, albeit with a lot of plot-derived absences, disappearances, and separations to blame. 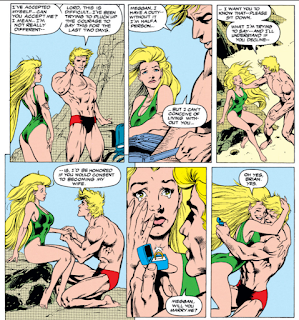 Widget pops up again briefly, still spouting (apparent) gibberish before disappearing again, as Davis keeps simmering what will ultimately be his final plotline for the series. 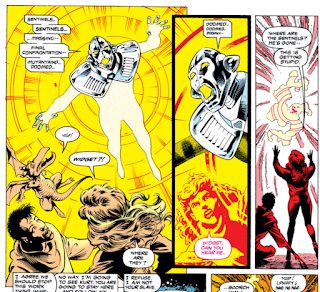 Creator Central
Both Alan Davis & Mark Farmer return with this issue, bringing to an end Davis' final absence from the series (at least until his final absence, when he leaves the book for good).

A Work in Progress
Brian notes that he hasn't been sleeping since their encounter with Sat-yr-9 and her subsequent escape, something which bothers Meggan.

This issue reveals that Micromax is Scott Wright, a local radio DJ. 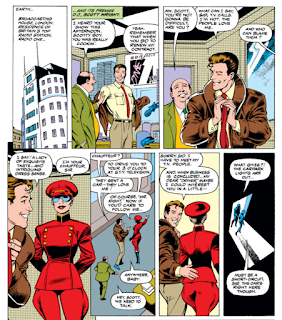 He is attacked by agents sent by Nigel Orpington-Smith, the leader of the RCX, who first appeared in issue #49

Kitty and Feron argue about Feron's poor attitude, and in the process, Feron makes Kitty recognize some of her May Sue-ish tendencies. 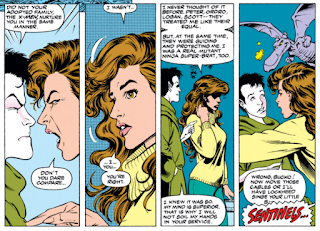 Alistair learns the RCX framed his sister before her death, but a cliffhanger interrupts him before we learn more. 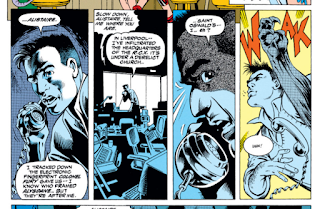 Claremontisms
During their sparring session, Captain Britain asks Nightcrawler if he's surprised someone as big as him can move so fast. 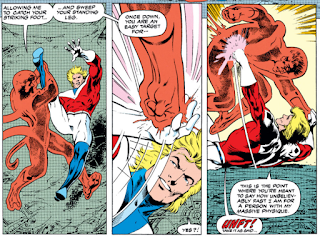 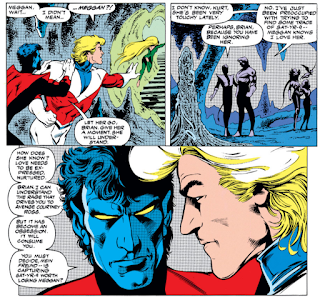 Artistic Achievements
Davis depicts the battle between Galactus and Phoenix through a series of wordless one page splashes sprinkled throughout the issue. 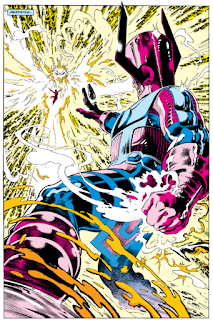 It's in the Mail
Letters in this issue rave about Joe Madureira's work on issues #57-58. It's also noticed that Alistair's now-deceased sister's name is actually Alysdane (as it was spelled in issues #55-56), not "Alysande", as its been spelled in every one of her other appearances. I never noticed either the correct "misspelling" in issues #55-56, nor ever knew her name wasn't Alysande, until reading this letter column for this review.

Austin's Analysis
Most of this issue is focused on character building (Brian & Meggan getting engaged, Kitty realizing she's kind of a Mary Sue) and plot setup (both the immediate "attack on Micromaz" and the more simmering Widget stuff), and that's all well and good (and appreciated), but Alan Davis is back behind the wheel, and his stuff has never looked better. The various full page splashes depicting the battle between Galactus & Phoenix, interspersed throughout the issue, are simply gorgeous. We've seen the pair battle before, in issue #25, but that was drawn by Chris Wozniak (and featured more of the whole team in action), whereas this gives us the full-on majesty of Alan Davis drawing two cosmically-powered characters in pitched battle. It's a heck of a way to mark a much-needed return, and does a lot to wash out memories of the previous two-issue Wakanda story.