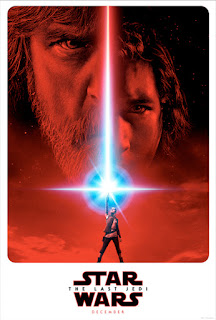 With the first teaser trailer for Episode VIII, The Last Jedi finally unveiled (at Star Wars Celebration Orlando), here's a look at five cool, notable and/or eyebrow-raising moments from it.

Spoilers, obviously, if you're one of those people who don't want to see or know anything about the movie ahead of time.

Parallel Structure
This trailer is rife with parallels to the initial Force Awakens teaser, from both opening with shots of gasping characters' heads coming into view from beneath the frame (Finn/Rey), to shots of broken helmets occurring at the same times (Darth Vader's/Kylo Ren's), to each ending with a shot of Luke from behind. Very cool.

Rey on the Cliff
It's not quite on the level of Rey speeding past a downed Star Destroyer on Jakku, but my favorite shot of this teaser, just in terms of how it's lit, constructed and for thematic impact, is the pan around a mountain to reveal Rey (probably) practicing with a lightsaber on a cliff, as someone (presumably Luke) watches.

Finn
No idea what this is all about, but this brief shot of an unconscious Finn in some kind of pod and healing/space suit, has a very hard sci-fi/2001 vibe to it that is fairly unique in Star Wars.

First Order Walkers
Look closely at that final shot of the new speeders kicking up red dust (on the planet director Rian Johnson has declared to be Crait), and you can see in the distance what looks to be Walkers, presumably, the First Order ones seen briefly during General Hux's speech in Force Awakens.

Balance
Aside from being the first words spoken by Luke in the Sequel Trilogy, the opening dialogue of the teaser that ends with the word "balance" not only suggests a much-theorized path forward for Jedi in the Sequel Trilogy (ie that Force-users need to seek a balance, rather than strictly reject the Dark in favor of the Light, the idea of the so-called Grey Jedi), but also calls to mind the somewhat-underplayed prophecy of the Prequel Trilogy, in which Anakin was meant to bring balance to the Force, giving more hope to this Prequel Era aficionado that more elements from that time will continue to be, however subtly, acknowledged and referenced going forward.