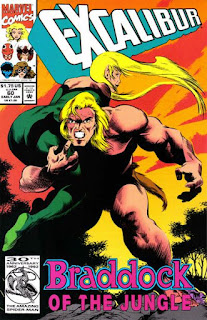 "Braddock of the Jungle"
Early January 1993

In a Nutshell
A hodgepodge assortment of Avengers & Excalibur defeat Icon.

Plot
Surrounded by Icon's unwilling minions and refusing to harm them, Black Panther surrenders, while Brian tries to find a way out of the shelter Black Panther put him in. In London, Nightcrawler & Cerise track down Knight Errant. Back in Wakanda, Brian manages to burrow under the shelter through the mud, emerging with his clothes tattered and dirty. He pretends to be a hero named Jungle Man in order to protect his identity, and joins Excalibur and the other Avengers in fighting Icon. In London, Nightcrawler & Cerise attack Knight Errant, only to discover he led them to a nuclear warhead left behind by terrorists. They let him go, much to Inspector Thomas' consternation, and he returns to the senior living home where he resides. In Wakanda, Icon is defeated, and Black Panther's suspicions are confirmed when Icon turns out to be a Wakandan scientist grieving the death of his daughter, who died as a result of the toxic waste Black Panther and Captain Britain were trying to destroy.

Firsts and Other Notables
Both Icon and Knight Errant are dealt with in this issue, such that neither one will ever appear again.

Icon does get one good moment, in which he laments that while Wakanda usually only has one resident superhero, he chose the day a ton of them were in town to make his big power play. 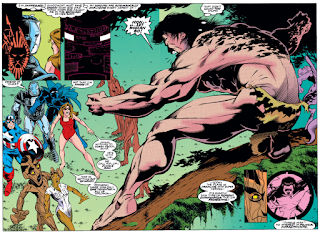 A Work in Progress
Not an idiot, Captain America puts together that the woman fighting alongside them is Meggan, since she's wearing the same clothes as Brian's assistant was.

Brian notes that his strength is failing, but he (or Lobdell) incorrectly blames his lack of costume; it's because he's not close to England. 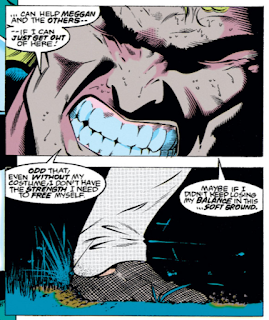 Iron Man ends the issue still having no clue who Excalibur is (remember, this is James Rhodes, who hasn't team-up with Excalibur in the past like Tony Stark did), though he recalls its supposed to be some kind of a sword. 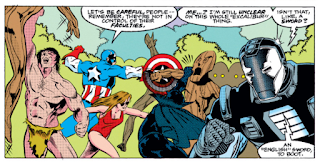 The Grim 'n' Gritty 90s
Kitty observes that whenever someone starts talking about creating a perfect society, they think destroying diversity is the best way to do it. Sadly, as true today as then. 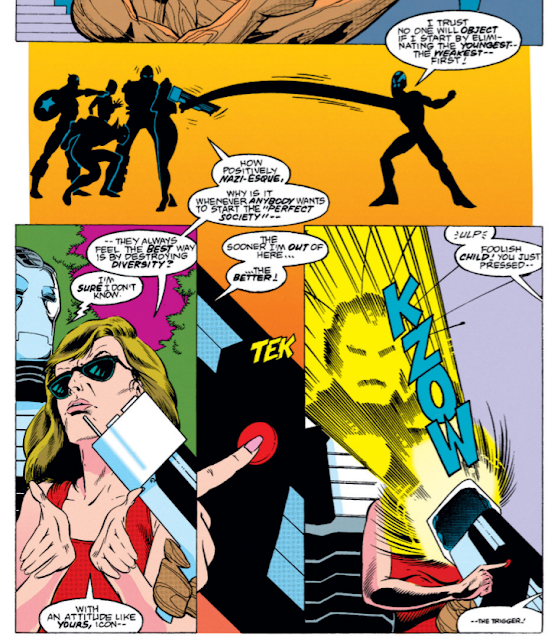 Austin's Analysis
A bad story limps along to a forgettable conclusion. Charitably, this isn't as bad as the previous issue, but that's mainly just because it's concluding and doesn't have to setup all of this nonsense. In the end, though, the whole Nightcrawler/Cerise/Knight Errant subplot is superfluous & pointless (they don't really even get a good "romantic couple" moment in this issue), all the secret identity shenanigans seem like a waste of time (especially when Captain America is figuring it out, Kitty is just being Kitty, without any attempt to hide her ID, and Iron Man is all "who the heck is Excalibur?" anyway), and it's unclear why Excalibur is even involved in this story, something Iron Man's comments also underscore (on a macro level, at least; I get that last issue tied itself in knots explaining what Captain Britain, Meggan & Shadowcat are doing in Wakanda). And, of course, the weird & questionable cultural commentary from last issue pervades this issue as well. Frankly, the best thing about it is Icon's joke about how lousy his timing is, making his big move during a team-up issue (but it's also never clear why he's making his move NOW). Excalibur has had way more than its fair share of fill-in stories, yet this still manages to rank pretty close to the bottom amongst them all.