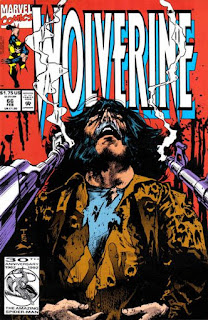 Firsts and Other Notables
This issue begins a story in which Wolverine attempts to learn the truth about "Terry Adams", first mentioned by Wraith last issue, when he thanked Wolverine for his help with that mission (a mission Wolverine doesn't remember). This will be Mark Texeira's last story as the series' artist.

The bar Prophecy first appeared in Marvel Comics Presents #72, during the "Weapon X" story (it's the bar outside of which Wolverine is first abducted in that story).

In order to learn more about Terry Adams, Wolverine asks Professor X to help unlock his memories, something Xavier has said Wolverine has never asked him to do before. In the process, Xavier ends up on the "painscape" of Wolverine's mind which is tied to his false memory implants. 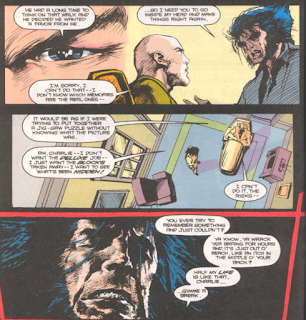 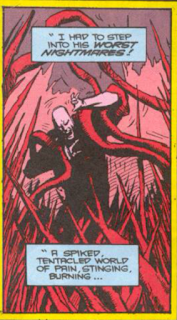 A Work in Progress
Upon discovering his destroyed bedroom, Professor X says it looks like Wolverine was trying to obliterate his present. 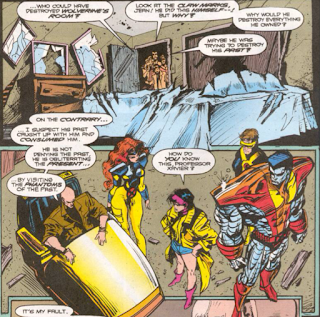 Wolverine is haunted by Janice, the scientist who worked on Omega Red and was rescued (and then subsequently killed) by Sabretooth, Wolverine & Maverick back in the '60s (as seen in X-Men #4-7). 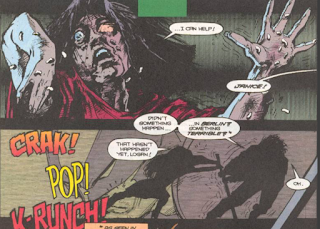 The Reference Section
Wolverine spends much of this issue thinking it's 1967, and as a result, it's peppered with references to history and pop culture from that era, such as the assassination of JFK, the fact that the Mets hadn't won a World Series yet (they would in 1969), Star Trek, Howdie Doodie, and the Beatles (who appear in the background of the opening splash page). 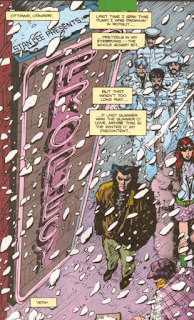 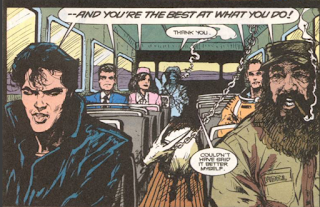 Austin's Analysis
Larry Hama's apparent "keep the reader off-balance and slightly confused" approach to recent stories continues; after last issue's "epilogue to a story that never actually ended", this one opens in media res, with Wolverine (and readers) once again unsure what is real and if what is happening is happening inside Wolverine's head, as he finds himself thinking its 1967 as he stumbles through some old Canadian stomping grounds while trying to learn the truth behind "Terry Adams" (it reads a bit like the X-Men version of Billy Joel's "We Didn't Start the Fire" which is, frankly, the best thing about it). Eventually, it's revealed that Wolverine addled condition is the result of a botched attempt by Professor X to unlock his memories, but the end result is the same: another issue of general confusion, cryptic hints, and unexplained events. Perhaps this is intentional on Hama's part, a way to make the reader feel like Wolverine, slightly lost in the narrative and not entirely sure what's going on. Intentional or not, it's getting a bit wearying at this point.