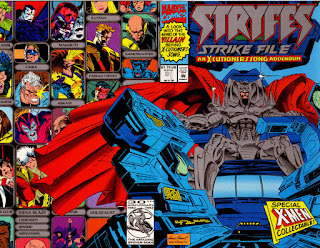 In a Nutshell
A collection of Stryfe's dossiers on his allies and enemies.

Plot
In the aftermath of Stryfe's assassination attempt, Professor X reads through Stryfe's files. In the end, he declines to share the information he learned with Cyclops & Jean Grey, and destroys the disc.

Firsts and Other Notables
This one-shot tie-in to "X-Cutioner's Song" is a cross between the old Marvel Handbook and those various "file pages" used to fill out issues of X-Factor and X-Force. At its core, it's built around the twelve trading cards included in each chapter of the story, reproducing both the art and the text from the cardbacks, then padding out the issue with new art and information, written in Stryfe's voice/from his perspective. I've heard reports that some comic shops gave this issue away to customers who ordered all chapters of the story, but it was available for regular retail, presumably released, at least in part, as a way for subscribers and newsstand buyers (remember them?) to experience the cards, as those issues didn't include them (of course, it was also a way for Marvel to milk more money out of the crossover).

Additionally, the issue serves as a bit of a preview for various post-"X-Cutioner's Song" plotlines, including the Legacy Virus, the return of Magneto and bits of "Fatal Attractions", and a handful of new characters. Some things never really come to fruition,

Reportedly, there was at some point in time talk of bringing Magneto back for "X-Cutioner's Song"; that idea was eventually tabled, though the character does return in the next crossover event, to celebrate the franchise's 30th anniversary. Presumably, that idea was already in place, as Stryfe teases Magneto's "inevitable" resurrection here.

As part of that return, Colossus will end up leaving the X-Men to join the Acolytes (the culmination of the months-long "shit on Colossus" plotline that's already began with the death of Mikhail). In a line I completely overlooked as a kid, that defection is teased here, as Stryfe references the defection of an X-Man to the Acolytes.

I believe this is the first place Fabian Cortez, Magneto-killer (or an accessory, at least) and leader of the Acolytes, is mentioned as being a member of the Upstarts.

Regarding Beast, Stryfe declares that his legacy will bring out the best in him, a reference to the way Beast will take a leading role in fighting the Legacy Virus in the months ahead (though it could be argued this somewhat sidelines the characters and ultimately leaves him damaged, as it takes forever to actually cure the virus).

He also says of Moira that when mutants are at their worst, she will be at their best, a hint at her deep involvement in the Legacy Virus storyline as well.

This bit of foreshadowing is a bit more tenuous, but Psylocke is depicted in both her armor-wielding Outback era form and her current ninja assassin form. This may be foreshadowing the upcoming debut of Revanche (who first appears wearing Psylocke's old armor) and the various retcons to Psylocke's transformation. 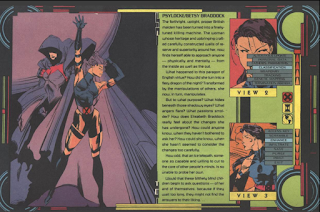 Colossus' sister Illyana gets an entry, and in it, Stryfe declares that his legacy can strike anywhere, which I've always read (in hindsight) as foreshadowing of her upcoming death by Legacy Virus. 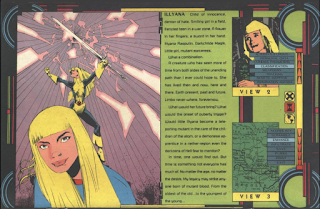 Despite "X-Cutioner's Song" doing a lot to put to rest lingering plotlines from the post-relaunch, pre-Image Exodus days, the Upstarts plotline, once seemingly the signature plotline of the Lee/Portacio X-books, lingers, and gets some play here, as the group gets its own entry, two of its members appear for the for the first time, and the group (and their goals) get referenced in a handful of other entries. In the end, the plotline will continue to progress sporadically over the next few months, before ultimately being put to rest for good in the "Child's Play" X-Force/New Warriors crossover.

Four characters appear in this issue for the first time, ahead of their first appearances in a regular comic book story. First is Holocaust, a character who will not appear in an actual comic book story until "Age of Apocalypse", at which point he'll look much different and be the son of Apocalypse, but that version of the character is said to be that reality's counterpart to the character appearing here (and, just to confuse the matter, the "Age of Apocalypse" Holocaust will survive the destruction of that reality and come the "main" 616 Marvel Universe for awhile. And then, much later, the 616 version of Holocaust, technically the character appearing here, will debut with the name Genocide in Uncanny X-Force). 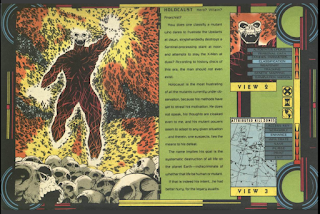 Next is Graydon Creed, revealed here to be a member of the Upstarts and teased to be Sabretooth's son (which will eventually be confirmed), though his appearance here doesn't match his final look (it does match one of the characters depicted on the Upstarts card from the first set of X-Men cards, so presumably Stroman is working off of Jim Lee's notes/designs here). It's said that his philosophy behind winning the Upstarts competition is quantity over quality (ie kill more low level mutants instead of big targets like Magneto or Sebastian Shaw), which is pretty much all we'll ever get about Creed's involvement with the Upstarts. 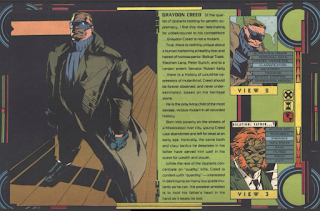 Third is Threnody, who will first appear in X-Men #27, end up working for Mr. Sinister for awhile, and eventually have a recurring role in the abysmal X-Man series. 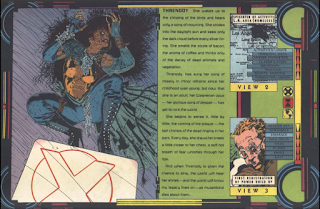 Finally, Sienna Blaze, the final member of the Upstarts, appears here before her debut in X-Men Unlimited #1. 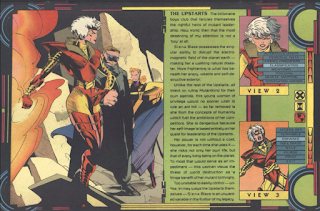 A Work in Progress
The weird assassin who targeted the White Queen in Uncanny X-Men #281 (before Fitzroy's attack) is pictured amongst the Acolytes. 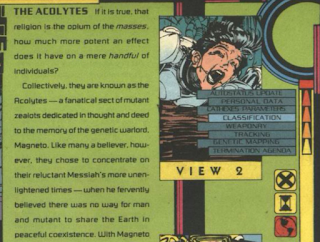 Stryfe refers to Xavier as "the preacher of the open hand"; X-Force #19 will further play with the idea of a closed fist/open hand philosophical dichotomy.

Askani (the woman who took Nathan Christopher into the future) is still referred to as being one individual person with that name.

Stryfe refers to Mr. Sinister as the architect of his body and soul, which makes sense, since Sinister more or less arranged for Stryfe's creation.

The little-seen Gamesmaster gets an entry, and the idea that he is an omnipath, constantly in touch with all the minds on the planet, and that he runs the Upstart competition as a distraction from that, is established. 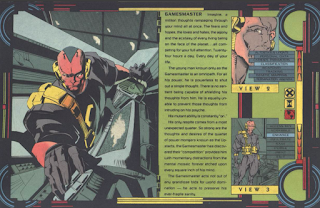 Apocalypse is said to be the Egyptian External who won, furthering that character's connection to Egypt and explicitly connecting him to the Externals from X-Force for the first time (a connection that mostly gets downplayed as the Externals are put to bed).

Similarly, Cannonball's entry reinforces the idea that as an External, he will not die but can be killed. The idea of Cannonball as a "closed fist" advocate is also put forth.

Human/Mutant Relations
Stryfe believes that if Xavier & Magneto had worked together, they could have solved mutantkinds problems. 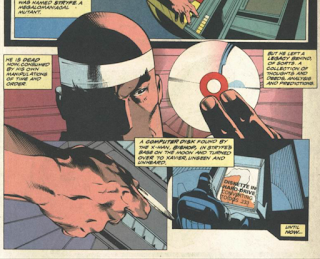 Austin's Analysis
Ostensibly, this is not unlike the Marvel Handbooks, providing text-based information about various characters alongside pin-up style artwork, Where it differs (aside from the in-universe framing device) is that each entry is written in Stryfe's voice (such as it is), rather than in the encyclopedic style of the Handbooks, and it covers both events and characters that have yet to occur/appear in any issues. While the former is rather tedious, the latter makes it an interesting relic of its time, both for the windows it gives into how far out certain characters and plotlines have already been planned (like Sienna Blaze and Colossus' defection, something which won't occur until about eight months after the end of "X-Cutioner's Song") as well as things that never quite panned out as hinted at here (including both Holocaust, who does eventually appear but doesn't really resemble how he's presented here, and the Upstarts, who never manage to live up to their hype in any concrete way). The end result is that while this really offers little of interest in-universe, and is hardly required reading as part of or an epilogue to "X-Cutioner's Song", it's still a fun little snapshot of a specific time in the publishing history of the franchise, both in terms of the in-universe plotlines and the way the speculator market supported something like this, as the various series fully launch into the post-Image Exodus era.