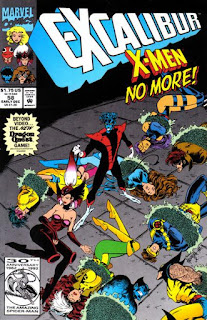 In a Nutshell
Excalibur & the X-Men defeat the Troll Associates.

Plot
With the X-Men and Excalibur captives of the Troll Associates, bound in mystical chains which suppress their powers, Nightcrawler stuns everyone when he exposes Cyclops surreptitious efforts to call for help, telling the trolls that his looks have always made him an outcast and throwing his lot in with them. He proceeds to prove his worth to the trolls by seemingly taking out the still-free Cerise and Feron. But in truth, he teleports Feron to the captive X-Men in order to free them. Nightcrawler then challenges the leader of the trolls to a duel, and during their fight, the X-Men are able to free Tom Jones' mother, ending their leverage over him. Tom proceeds to turn the more militant trolls into gold, while Excalibur helps the rest of the more peaceful trolls settle in the Crazy Gang's wonderland, where they are regaled with stories by Jester.

Firsts and Other Notables
The narrator of this story turns out to be Jester, one of the Crazy Gang, as the Troll Associates are ultimately transferred to their Wonderland for safe keeping. 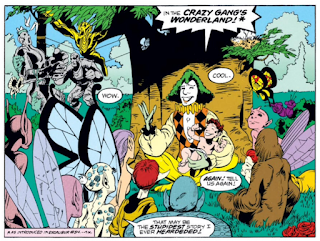 As the issue ends, Cyclops declares that the X-Men and Excalibur need to maintain closer ties going forward; ultimately, they will, though not for about another year, after the series is formally moved into the X-office (Cyclops also calls Nightcrawler "son", which is odd, since they're roughly the same age). 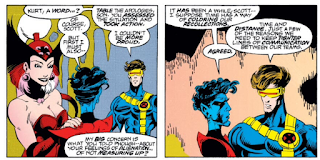 A Work in Progress
Cyclops apparently keeps a radio in his boot. 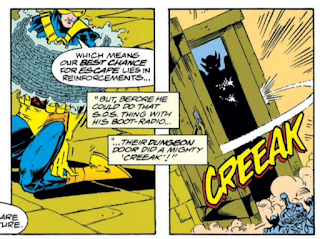 Kitty rightly points out that she doesn't know Gambit, as this is the first time the two characters have interacted. 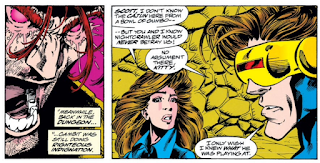 Cyclop's complements Nightcrawler on taking a gamble and having it pay off, ending whatever lingering resentment was in place from the previous issue. 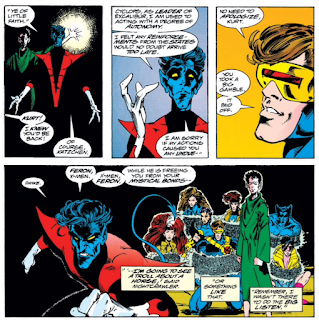 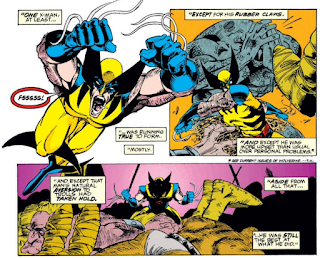 Since his last appearance in X-Factor, Alchemy has learned to transmute human skin, meaning he can change humans back and forth from gold. 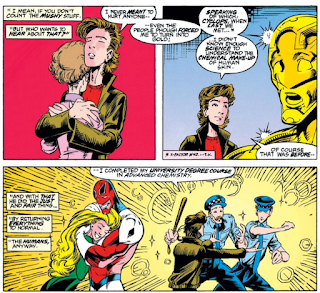 The Grim 'n' Gritty 90s
Jubilee compares being tied up in chains to watching Beverly Hills, 90210. 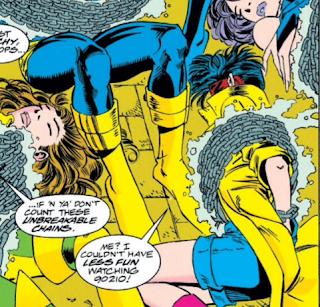 Artistic Achievements
For whatever reason, on both the cover and opening splash page, Rogue is drawn especially buxom (even for her). 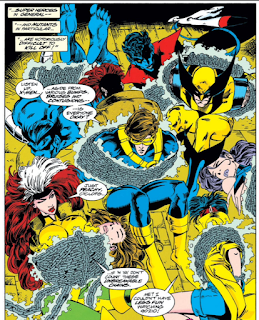 The Best There is at What He Does
Being in the presence of trolls causes Wolverine to go into a berserker rage, and it's said this is due to the inborn animosity of humans towards trolls taking a bigger toll on Wolverine. 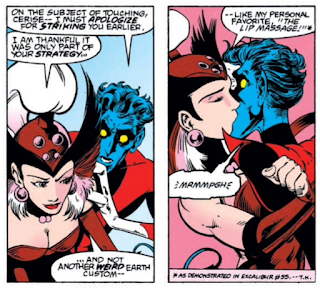 It's in the Mail
Somewhat humorously, a letter run in this issue (during an Alan Davis break) expresses excitement over the return of Alan Davis following his last break from the series.

A Technet limited series is also teased, though I don't believe it ever materializes.

Austin's Analysis
Continuing last issue's strong showing (relative to other Excalibur fill-ins), this turns out to be a nice showcase for Nightcrawler, as he successfully pulls off a defection ruse en route to more or less singlehandedly defeating the Troll Associates (or at least singlehandedly bringing into the fight the people who helped defeat them). Unfortunately, Alchemy gets a little lost in the shuffle, and there's not really anything presented to make his situation here different than in his first appearance (reluctantly working for the Troll Associates to protect his kidnapped mother), but given he's a guest-star (and barely a notable one) that's less egregious. It's the focus on Nightcrawler here, and the long overdue team-up between Excalibur and the X-Men across both issues, that's important, and those are the pieces, along with the really solid art, that help elevate this story above the series' usual fill-in dreck, and make the absence of Davis on script and art more bearable than usual.