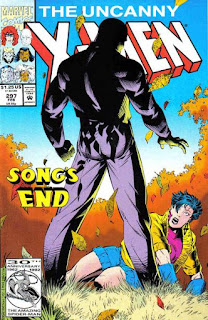 In a Nutshell
The epilogue to "X-Cutioner's Song".

Plot
As Beast & Archangel begin rebuilding Harry's Hideaway, Gambit joins Rogue on the roof of the mansion and tries to comfort her, while Jubilee encounters a walking Professor X. As Beast & Archangel work, they discuss how their lives have changed since they were kids in school together, and Jubilee decides to take Xavier rollerblading. Rogue tells Gambit that despite all the frustrations the X-Men face, she could deal with it all if someone, especially him, could just pat her on shoulder and promise her it would all be okay. When he tries to touch her, she angrily tells him she's not an object to be charged, and if he can't treat her with respect, he should leave. Which he does. Later, Beast & Archangel complete their work, and Gambit returns with a blanket, which he places on Rogue's shoulders, then promises her everything is going to be okay. Below, Xavier thanks Jubilee for the time they spent together, and gets up to leave. His legs visibly failing, Jubilee chides herself for not asking him if he needs help, before realizing she doesn't need to ask, and instead just silently helps him back to his wheelchair.

Firsts and Other Notables
Though other issues out this month will also deal with the aftermath of the crossover, this issue serves more or less as the official epilogue to "X-Cutioner's Song", for what that's worth. It is the first of what will become something of a Scott Lobdell staple, the Post Crossover Quiet Issue, as Lobdell will often follow each of franchise's big crossover stories during his tenure with a quieter, more character-based issue.

Here, he focuses on three distinct pairings: Beast & Archangel reminiscing as they rebuilt Harry's Hideaway (destroyed during the battle with Apocalypse's Horsemen in issue #294), Gambit & Rogue growing closer as Rogue grapples with her feelings for Gambit, the limitations of her powers, and the recent attacks on the X-Men, and Xavier & Jubilee, as the latter helps Professor X enjoy his temporary ability to walk (said to be a a side effect of the techno-organic virus, allowing him the ability to walk for the first time since the Shadow King crushes his spine in iisue #280, though the explanation is vague and clearly just meant to setup the scenario for the sake of the story).

A Work in Progress
In the process of rebuilding Harry's Hideaways, Beast & Archangel share stories of times spent in the place themselves; first introduced in Claremont's New Mutants, this essentially establishes that the place has been around since the days of the original X-Men and that they frequented it as well. 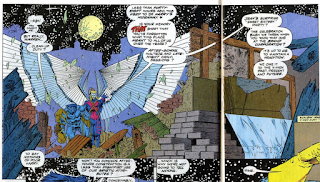 Specifically, Archangel manages throwing a party there for Beast on the eve of his departure to work at the Brand Corporation, as chronicled in his Amazing Adventures solo stories.

The pair also recount a fun untold story from the original X-Men, in which Archangel paid Beast to write a term paper for him, only for Professor X to decide the papers needed to be delivered mentally, a suggestion he received from Beast. 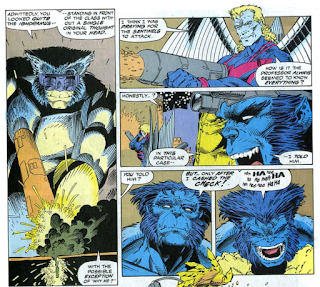 Image inducers can apparently be programmed to turn on automatically, as happens when a police officer comes across Beast & Archangel in Harry's.

Young Love
The Gambit/Rogue relationship gets kicked up a notch here, as Rogue admits she'd like to be comforted by Gambit most of all. 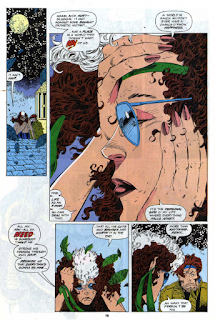 Later, in a surprisingly sweet moment, Gambit returns with a blanket, enabling him to touch Rogue on the shoulder and tell her that everything is going to be fine, as she wanted. 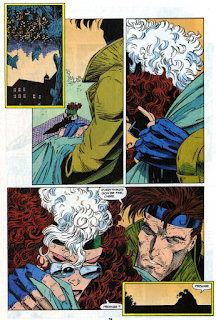 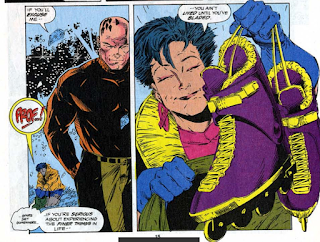 The Awesome and Terrible Power of Cyclops Archangel & Beast
During their rebuild, the pair stops to reflect on the respective physical changes wrought on them, with Beast pointing out that Archangel's transformation was forced on him, while Beast brought on his transformation himself. 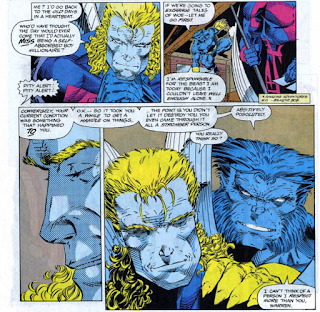 For Sale
There's a secondhand ad for the (Jim Lee-less) second series of X-Men trading cards in this issue. 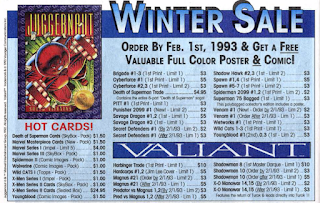 Something we haven't seen in ages: on one of the hodgepodge ad pages (containing a bunch of different ads), there's a handful of tiny ads for novelty items, like X-ray specs.

I'm not sure how seriously fans took the apparent death of Cable at the end of "X-Cutioner's Song" at the time (I certainly did, but then, I was a dumb kid) and/or if his solo series had already been announced , but anyone who had suspicions it was only temporary and happened to glance at Marvel's subscription page in the issue serving as the epilogue to the story in which he died would have had their suspicions confirmed, since Cable's upcoming solo series is listed as one of the subscription options available to purchase.

Bullpen Bulletins
In another sign of just how big the comic book bubble had grown at this point in time, as Marvel did their best to flood the market with as many titles as posible, this issue announces that the Bullpen Bulletin is going weekly, because Marvel is releasing too many titles per month to fit into one column.

Austin's Analysis
Scott Lobdell is not a writer without his faults (notably, especially in the early goings, his tendency to fallback on his standup comedy roots and write an awful lot of schtick into his characters' dialogue). But he's also not a writer without his strengths, and one of them is his ability to craft a great, quiet epilogue to big, noisy storyline. Though both put an emphasis on characterization over violent action, these are different than the Classic Claremont Quiet issues, which were more transitional issues checking in on multiple characters and plotlines in favor of devoting an entire issue to one story. The Post-Crossover Quiet issues of Lobdell are usually even quieter, and more focused on giving the series and characters a chance to breath, to allow characterization to once more come to the foreground after an extended period of crossover madness. This issue, the first of its kind under Lobdell, is one of his best.

All three stories are effective. The Beast/Archangel pairing shows just deep this old friendship is, and through some quiet retcons, adds to the legacy and sense of camaraderie among the original X-Men. The Gambit/Rogue interactions build up their budding relationship without the historonics and soap operatics that will come to define it; the moment when Gambit returns with a blanket so he can pat Rogue on the shoulder and (falsely) promise her everything is going to be okay is perhaps the sweetest moment in their entire convoluted relationship. And the Xavier/Jubilee team-up is achingly sweet. Lobdell smartly highlights not only the generational differences between the characters, but also, that for all that the X-Men venerate Xavier, Jubilee came up with the team at a time when he was out of the picture, and thus lacks the personal connection to him that many of the other X-Men do.

And so her desire help him take advantage of his short-lived ability to walk again by sharing an experience unique to her, and her later hesitancy to offer him help, is made all the more impactful because, unlike Beast & Archangel, these are two characters who don't have a deep personal connection and decades of history between them. It makes the moment when Xavier walks away, faltering, and Jubilee realizes she doesn't need to say anything, that she can simply help him back to his wheelchair, all the more touching, because we saw their relationship develop to that point over the course of the issue. Not every Scott Lobdell story can or will be a winner, but I'll gladly take all the clunkers in his run in if they come with issues like this.