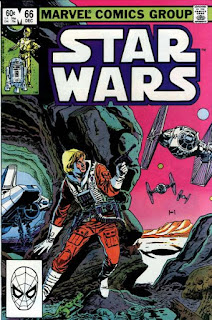 Plot
Luke, having lost pursuing TIE fighters by landing on the world of Beheboth, heads into the town of Garrotine in search of food & water. He learns that water is in short supply on the planet, and is mistaken for one of the brigands who routinely raid the moisture farms for it, but is vouched for by Darial Anglethorn, one of the more prosperous farmers. When she tells Luke about their plight, he agrees to work for her as a guard. That night, everyone on her farm, including Luke, mysteriously passes out, and when they awaken, all their equipment is wrecked, and both their water supplies and Darial are gone. Luke vows to get her back, and tracks her to the stronghold of the brigands, led by a pirate named Gideon Longspar. Gideon has captured part of the Tirrith, a hive-mind gaseous alien, and is using that part as a hostage to force the rest of the Tirrith to help him steal the water. Luke manages to free Darial and release the captive Tirrith, after which the reunited being helps Luke & Darial escape. Later, in thanks, they seed Beheboth's clouds with electricity, triggering massive storms which deliver much-needed rainfall, and Luke sets off to return to the Rebellion.

Firsts and Other Notables
This is Walt Simonson's last issue working on the series in any capacity, ending a run that began in issue #49 (with a few breaks). Michelinie, his partner for most of those issues, will last until issue #69, but this effectively marks the end of the Michelinie/Simonson era of the book, though Tom Palmer will remain after both departures, ensuring a certain level of visual consistency for the series.

This issue introduces Darial Anglethorn, a prosperous moisture farmer on the planet Beheboth, as well as the Tirrith, a hive-minded alien species with a gaseous form. Though neither appears again in the series, both were later featured on Wizards of the Coast's Star Wars roleplaying game website.

A Work in Progress
Luke's food rations are lost to sand lice. 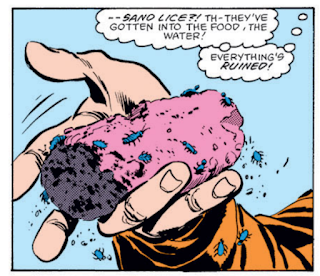 Arriving in town, he recognizes the smell of baked bantha. 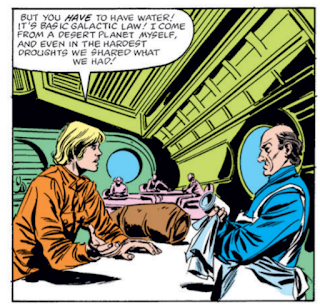 Luke says that Darial's farm has more guards than a banker convention on Aargau, another reference to the bank world from issue #48.

Gideon Longspar notes he hasn't seen a lightsaber since "the wars"; presumably he means the Clone Wars, which does actually make sense, since that's when most of the Jedi were wiped out. 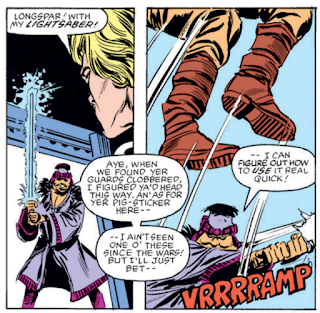 Remember Star Wars?
Luke remembers Uncle Owen & Aunt Beru (spelled "Baru"), and hopes that by helping Darial he can atone for not saving them. 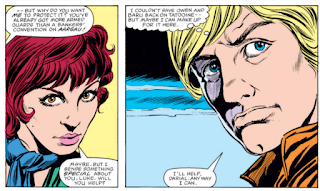 Just Yesterday, In a Galaxy Surprisingly Close By
After losing his rations, Luke sets out in search of "groceries". 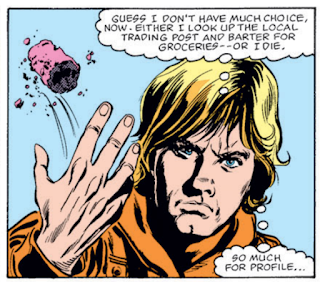 Austin's Analysis
After a strong previous issue with a solid cliffhanger, this is a little bit of a letdown. The cliffhanger, in which Luke was left stranded in Imperial crosshairs, his ship unable to jump to lightspeed, gets resolved more or less off-panel between issues (it's never even explained by the end how Luke's hyperdrive gets repaired), as this issue opens with Luke having fled and hidden on a nearby planet. After that, it settles in for a pretty basic "sci-fi Western" tale, as Luke befriends a local miner/farmer whose "crop" is being stolen by bandits, then helps fight off the bandits before going on his way (in that regard, it's not unlike the series' very first original story, albeit without the specific Magnificent Seven undertones). The way Luke references his own past as a farmer and desert-world dweller, and name drops his oft-forgotten deceased aunt and uncle, is appreciated, and adds a little something to the story. But even though this is handled by the entire regular creative team, it still reads very much like a fill-in story, doing little to advance the overall narrative Micheline & Simonson have been crafting, despite having a such a strong hook as a lead-in.

Next Issue
Han Solo returns in the series' second annual!