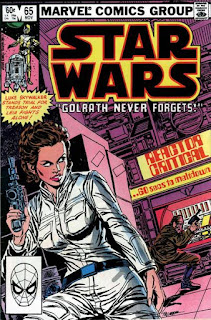 In a Nutshell
The Rebels race back to Golrath to prevent the base giving up their secrets to the Empire.

Plot
On Arbra, Princess Leia participates in Luke's trial, with Leia and the other two judges ultimately exonerating him of all charges. Shortly thereafter, the Rebels receive word that their former base on Golrath runs the risk of pointing the Empire to their current base, prompting Luke & Leia to lead an emergency mission back to the planet. But the Empire, led by Lieutenant Giel, is already on Golrath, and when Giel learns the base's secret, he sends word to Darth Vader. Shortly thereafter, the Rebels arrive, and Leia uses the ensuing skirmish between the TIEs and the Rebel fighters to sneak onto the Imperial base, intending to blow it up. But Giel anticpated her move, and corners her in the base's reactor. He intends to let her blow up the base, but to keep her captive while it happens, reasoning her death would be a bigger blow to the Rebellion. But Leia manages to escape and get off-planet before the base explodes. However, Luke's X-wing is damaged rescuing Leia. When the rest of the Rebels jump into hyperspace, he is unable to join them, and is left facing a squad of TIE fighters alone.

Firsts and Other Notables
The opening pages of this issue deal with Luke's formal trial for his (apparent) killing of Shira Brie, as we see the Rebel judicial system consists of a "Triad of Judgement", in which Leia, General Rieekan and a third Rebel general sit in judgement of Luke.

It ends with Luke exonerated and formally reinstated as a Commander in the Alliance. 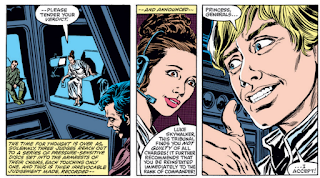 This is the final appearance of Admiral/Lieutenant Giel, who actually stuck around longer than the average non-Vader Imperial adversary. His first name is also revealed to be "Mils".

A Work in Progress
Luke's trial includes computer simulations of the events on Shalyvane in issues #62-63, and is broadcast throughout the base on Arbra (which, given how publicly Leia and Luke made his earlier dismissal, is a nice touch). 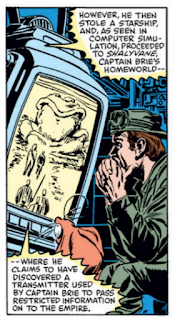 Milo, the hothead who threw shade at Luke in issue #62, remains suspicious, and suggests the trial was rigged. 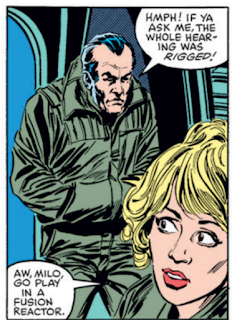 This issue reveals that the rock on Golrath, the site of the Rebel base in issue #50, is capable of recording and replaying events that happened around it when it starts to cool, which is patently ridiculous, but is really just an excuse to get the Rebels frantically back to Golrath. 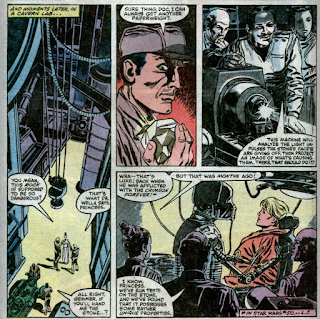 The two squads of fighters that head for Golrath are Red and Blue squadrons (not, notably, Rogue Squadron).

The Imperials on Golrath were led there after a planted agent informed them that the Rebels had used it as a base, a oblique reference to Shira Brie.

Via narration, a pair of Stormtroopers Leia takes out en route to blowing up the base are given a surprisingly compelling backstory, with one a golden boy on the rise, and the other, his academy roommate living in his shelter. 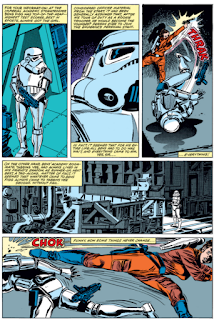 Just Yesterday, In a Galaxy Surprisingly Close By
The three judges render their verdict by pressing a "pressure sensitive disc", or what we would call "a button".

One of the Stormtroopers in this issue takes a smoke break.

You Kiss Your Sister With That Mouth?
Luke & Leia get frighteningly close in the wake of Luke's exoneration, though at this point, it's icky not just for the forthcoming brother/sister retcon, but also because Leia is, you know, supposed to be in love with Han. 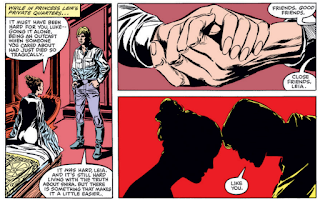 Austin's Analysis
After a lackluster fill-in, Michelinie & Simonson return on point in this issue, one which combines several threads from the series' recent past to its advantage: Luke's trial (and subsequent exoneration) from when he shot down Shira at the urgings of the Force, Shira's role as a double agent, the Rebel's previous base on Golrath, and Lieutenant nee Admiral Giel's desire to curry favor with Darth Vader. All together, these little references to stories past once again create the feeling that nothing here is happening in a vacuum, that each issue, no matter how standalone its central plot may seem, is contributing to the larger narrative.

Moreover, after several Luke-centric issues, Leia gets the spotlight here. In general, this series has done a good job showcasing both the princess/politician side of Leia and her Rebel warrior side, which this issue does in microcosm, as she goes from presiding over Luke's trial to blowing up the Imperial installation on Golrath. It would have been all too easy to slip Luke into the position of the Rebel-on-the-ground on Golrath, but Micheline & Simsonson resist the urge and instead give that role to Leia, to both the character and the story's benefit.

Magic rocks aside, good stuff all around here.