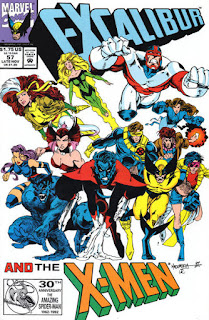 In a Nutshell
Excalibur & the X-Men team-up to rescue Alchemy from the Troll Associates.

Plot
Tom Jones frantically tries to contact the X-Men for help rescuing his mom, only to be captured by shadowy figures. Later, as Excalibur is searching for Sat-yr-9, they comes across gold statues that turn out to be real people transformed into gold. Meggan leads the team back to their assailants, where they run afoul of the Troll Associates, who have kidnapped Tom. As the trolls escape, Captain Britain is turned to gold by Tom as well. As Nightcrawler sends Cerise to fetch Feron, the X-Men, having received Tom's earlier message, arrive in England. Wolverine tracks Tom's scent to where Excalibur is searching the sewers for him, and the two teams enjoy a brief reunion before Psylocke telepathically picks up on the psychic distress of Tom and his mother, whom the trolls have kidnapped to force Tom to work for them. The X-Men and Excalibur track Tom to a chamber behind a massive door. As Psylocke senses Tom and the trolls behind it, Cyclops orders Gambit to blow the door, just as Wolverine realizes from its smell that Tom has turned it into plastique, thus triggering a massive explosion when Gambit's thrown card detonates.

Firsts and Other Notables
This issue features the first on-panel, in-series, no-shenanigans, full-fledged interaction between Excalibur and a group of X-Men, as the X-Men Blue team guest stars. 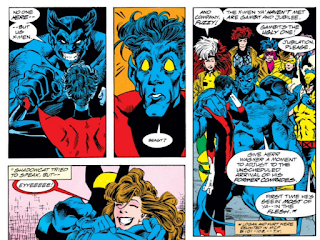 Future superstar artist Joe Madureira pencils this issue, his first work on one of the regular X-books. He will take over as regular artist on Uncanny X-Men with issue #312.

Alchemy, the winner of Marvel's "create a mutant" contest circa "Fall of the Mutants", who first appeared in X-Factor #41, returns in this issue. I had no idea he ever made an additional appearance outside that introductory story, but it makes sense for him to appear here, given that, like Excalibur, he too is British. 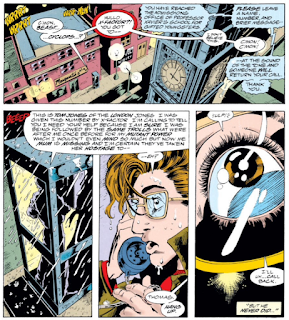 Of course, we can't have Alchemy without the Troll Associates, the group of trolls who menaced him in that previous story. 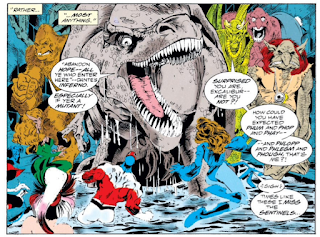 Creator Central
Scott Lobdell returns, filling in for Alan Davis as scripter, though Davis still gets plotting credit for the issue.

The Chronology Corner
The X-Men's appearance in this story occurs between X-Men #13 and "X-Cutioner's Song"; since Psylocke in on the Blackbird as the team flies to England, she presumably went home after the end of the previous issue, only to return here.

A Work in Progress
It's not quite clear why, but this story appears to be being narrated by one the Crazy Gang (it's also not entirely clear how he would privy to the thoughts of the characters in this story).

As the issue begins, Excalibur is trying to track down Sat-yr-9.

Cerise uses her powers to create a "solar axe", at least according to the narrator of the story. 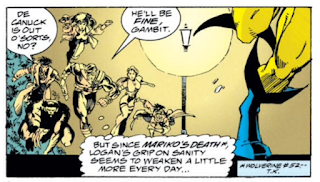 As part of the Excalibur/X-Men reunion, Kitty gets a moment with Wolverine (her first interaction with him on-panel since Fantastic Four vs. the X-Men), as well as with Rogue (with whom she was on the X-Men for a good chunk of time as well). 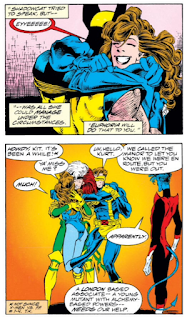 This is actually the third consecutive issue of this series in which Psylocke appears, though her guest appearance in the previous story (as well as her relationship with Captain Britain), goes unremarked upon here.

Nightcrawler bristles as Cyclops takes charges and orders him to "bring up the rear". 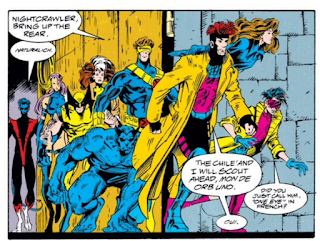 Austin's Analysis
Coming off a fun, well-crafted story from Alan Davis that still left me wanting more, I was dreading a return to the series seemingly-neverending fill-in interruptions, but this turned out to be a rather pleasant surprise. Despite being technically a fill-in, it doesn't exist in a narrative vacuum, picking up with the team searching for Sat-yr-9 in the wake of her escape last issue, and it continues at least some of the character beats from previous issues, like Nightcrawler's evolving role as team leader, or Kitty's personal disgust with Sat-yr-9. Whether this is a result of Davis at least plotting the issue, or just Lobdell feeling more comfortable as the series' "regular" fill-in guy, the end result is a fill-in that feels less standalone and interrupting than usual.

Plus, I had no idea that Alchemy made any appearances outside of his initial one, and seeing him here again tickled my Simonson's X-Factor fancy (even if, thus, far, his story is pretty much the exact same as the first time around, with the Troll Associates kidnapping his mom and forcing him to use his powers for their benefit). And while the various non-Alan Davis artists this series has employed throughout its history have been...a mixed bag, at best, Joe Madureira's art here is another pleasant surprise. It's still a little raw and not quite full-formed (relative to his later style on Uncanny), but there's flashes of his later work in it, and he displays at least a rudimentary understanding of layouts and storytelling, such that the art, if not on Alan Davis' level, at least isn't detracting from the story (which, again, hasn't always been true when it comes to non-Davis art on this series).

And, last but not least, we finally get an honest-to-goodness meeting between Excalibur and the X-Men! There's been teases and feints and partial reunions (like Xavier & Jean in issue #52 or Psylocke in the last story), but this is the real deal. Kitty and Wolverine! Kitty and Rogue (as a fan of the Claremont/Paul Smith/JRjr era, I love that Lobdell or Davis remembered that they spent a fair amount of time together as X-Men)! Cyclops being a dick and not respecting Nightcrawler's character growth! Of course, there's plenty more that could have come from a full-fledged Excalibur/X-Men reunion, especially given how the in-universe origin of this series is so tied to the X-Men, but at this point, I'll take what I can get, especially coming from one of the series ubiquitous fill-ins.