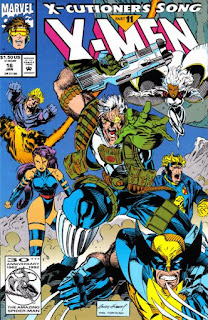 In a Nutshell
The X-Men close in on Stryfe.

Plot
Cable, Bishop & Wolverine engage the Dark Riders, but are nearly overcome before the timely arrival of the X-Men strike team & Apocalypse helps turns the battle into a rout. Stryfe watches the fighting, then gathers up Cyclops & Jean Grey. The X-Men split up, with Apocalypse going off alone while Wolverine & Psylocke manage to track Cyclops & Jean, realizing that Stryfe has taken them out onto the moon. As Havok, Polaris, Cannonball & Cable use Apocalypse's ship to track them down, Apocalypse attacks the Dark Riders. On the surface of the moon, Cable's group discovers that Stryfe has taken Cyclops & Jean to a massive tower surrounded by a force field. They attempt to enter, but only Havok & Cable are able to get through. Inside, they find a waiting Stryfe, who tells Cable it's time they had a chat, about time lost and gained, the future and the past, and of life and death.

Firsts and Other Notables
As we ramp up to the conclusion of "X-Cutioner's Song", the teases about Cable & Stryfe continue at a steady clip. First, when Stryfe takes Cyclops & Jean out onto the surface of the moon, he refers to their trip as a "family stroll". 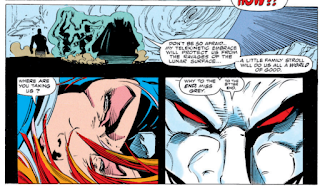 Later, when Xavier regains consciousness, he wakes up and declares that Cable, Stryfe, Cyclops and Jean are all linked by blood. 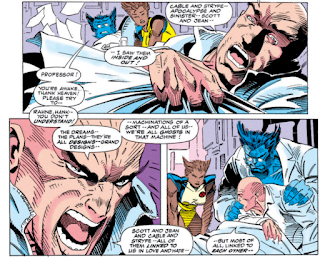 Finally, only Cable & Havok are able to penetrate the force field surrounding Stryfe's tower; X-Force #18 makes it clear that it's programmed to only allow in people with Summers DNA. 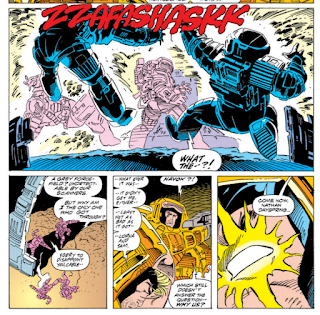 Archangel is on this issue's featured card. 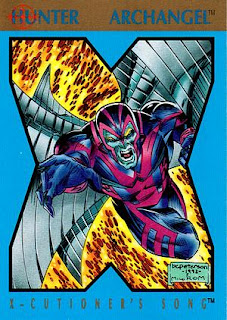 Work in Progress
While the individual, super-powered members of the MLF have been taken out of the picture already, the faceless, nameless hired goons Stryfe also always has on hand remain, and help the Dark Riders take on the X-Men in this issue.

Psylocke says she can only telepathically sense Cyclop's presence, which might be another entry in the "Psylocke/Cyclops flirtation" subplot, or not. 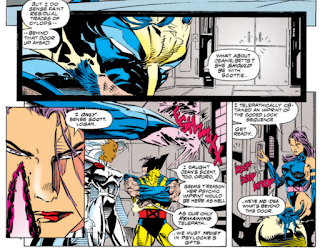 In X-Factor #86, Cable suggested that Graymalkin had to be reprogrammed to allow teleportation onto the moon, due to differences in gravity, etc. Here, Cable says it was needed to punch through the shields Stryfe had around the base.

Reunited for the first time since X-Force #13, Cannonball tries to press Cable for information, but Cable continues to blow him off. 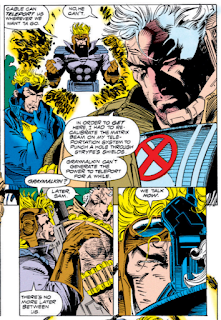 Xavier regains consciousness in this issue.

Artistic Achievements
There's a couple of different montages in this issue. The first occurs while Xavier is unconscious, and is fairly generic (armored soldiers, a woman, a child, Xavier), presumably meant to indicate Xavier processing events of the crossover telepathically. The second occurs at the end of the issue, surrounding Stryfe's moon tower. X-Force #18 shows that the tower is tied into temporal energy, and that these are flashes of past events. Things shown here are, again, mostly generic (Cyclops blasting a Sentinel, old school Angel, & Magneto), aside from the fairly specific (and random) image of Colossus being grabbed from behind by Professor X (from Uncanny #279). 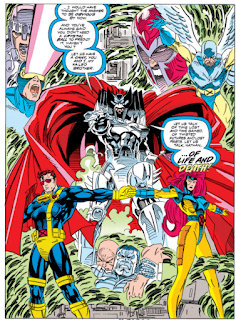 The Best There is at What He Does
This issue contains a bit of dialogue from Wolverine that became somewhat infamous around this time, when he says, during the fight with the Dark Riders, that one of his ribs is shattered. Which, of course, is impossible, since his ribs are covered in adamantium just like all his other bones. 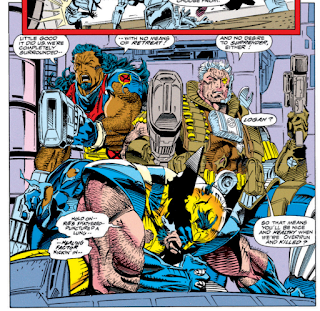 The Cable Guy
Cable notes that he's familiar with Apocalypse's technology, another hint at his true identity that was echoed in X-Factor #85, when Apocalypse visited his safehouse. 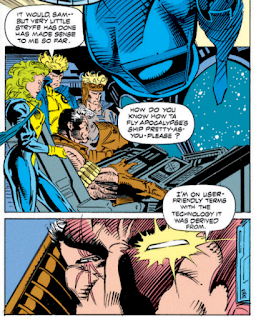 Austin's Analysis
Not much to this one, as it's the standard penultimate chapter of a crossover, action-orientated as it moves the characters into place for the big finale in the next chapter. So you get Stryfe dragging Cyclops & Jean Grey out onto the surface of the moon, the X-Men/X-Factor strike team splitting up so the appropriate people can end up on the moon with them in the next chapter, and Professor X shouting purple prose gibberish amidst a random montage of events to ramp up the sense of foreboding and narrative culmination. Whether rushed or still developing his skills, Andy Kubert's art still isn't the best, robbing some of the fight scenes here of their impact (especially problematic since this issue is almost entirely fight scenes), but otherwise, this effectively does its job of setting the stage for the final chapter.

Next Issue
Tomorrow, "X-Cutioner's Song" concludes in X-Force #18. Friday, our fill-in nightmare concludes (for now) in Excalibur #60. Next week, we peek inside Stryfe's Strike File #1.