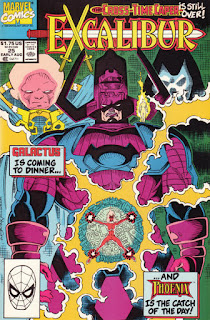 In a Nutshell
Phoenix battles Galactus.

Plot
Galactus' herald, Nova, approaches Excalibur, telling them Galactus has declared Phoenix too dangerous to live, and asks that they hand her over. Phoenix responds by punching Nova to the moon, where she encounters the Watcher, who confirms he will be honoring his pledge not to interfere. Back on Earth, the rest of Excalibur tries to destroy the device Galactus is constructing while Phoenix and Alistar search the lighthouse for a device Alistair thinks can help, realizing along the way that the lighthouse is built on a nexus point of alternate dimensions. Outside, Roma appears in the midst of Excalibur's battle, followed by Death itself. Phoenix and Alistair emerge, and as Phoenix hurls Nova at Galactus, Alistair uses his device, hoping to shunt Galactus to the further reaches of time and space. 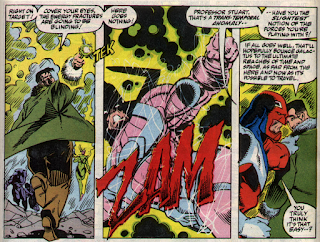 However, all their efforts do is make Galactus angry, prompting Phoenix to realize if the fight continues, the entire planet could be in danger. So she agrees to sacrifice herself. Yet when Galactus prepares to destroy her, the stars start to go out, prompting Roma and Death to point out that Phoenix is the embodiment of life; despite the danger Galactus may believe she poses to him, to eliminate Phoenix is to eliminate all life from the universe. This causes him to relent, and he departs, wishing Phoenix well of her destiny. Meanwhile, Kitty is bound for school, still bristling over the fact that she must attend secondary school before university, though she's confidant that within a term, she'll be running the place.

Firsts and Other Notables
Phoenix battles Galactus in this issue, as teased by the ending of issue #14, as well as his current herald, Nova (aka Frankie Raye, the one-time girlfriend of Human Torch). Additionally, the Watcher pops up, with Nova asking if he's going to interfere again like he did during Galactus' first appearance (in Fantastic Four #48-50), as does Roma, Captain Britain's benefactress and the agent of the X-Men's rebirth in "Fall of the Mutants".

Death is also on hand for the Phoenix/Galactus battle, appearing as, amongst others, Death from Neil Gaiman's Sandman, the traditional hooded female figure of the Marvel Universe, and a male construction work, from Claremont's backup story in Classic X-Men #43 (in which post-suicide Jean Grey encounters Death in that form). Death also notes to Rachel that he's familiar with her mother. 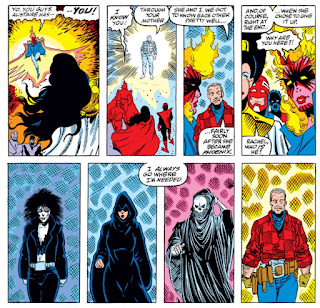 Still separated from Excalibur and unawares they've returned home, Kitty is preparing to attend high school, with Fake Courtney's help, something she's not too happy about (she wants to go to university, but the school insists she attend primary school for awhile first, due to her atypical educational environment previously). All of which, I believe, is set-up for the "Girls School From Heck" storyline. The scene from issue #1 in which Nightcrawler inexplicably finds himself transported from the lighthouse to another world is explained in this issue as being the result of the lighthouse being built on a dimensional crossroads of sorts. 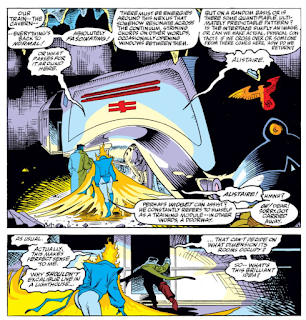 Following in the footsteps of Uncanny X-Men and Wolverine (but joining the party a month later), this marks the beginning of bi-weekly shipping for Excalibur over the next three months.

A blurb on this issue's cover assures readers that the "Cross-Time Caper" is over.

The Creator Corner
Chris Wozniak, who filled-in on previous issues of this series (and contributed a few not-bad pages to New Mutants Annual #6) returns, inked by Al Milgrom (which presumably is why Wozniak's work doesn't even reach the level of his New Mutants Annual stuff).

A Work in Progress
Continuing the previous issue's tongue-in-cheek commentary, a narrative caption refers to the "Cross-Time Caper" as "seemingly endless".

Nigthcrawler's role as the leader of the team becomes much more pronounced in this issue. 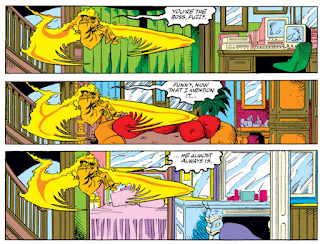 Kitty's schooling at Xavier's school is described as being more like a one-on-one tutorial than an actual school environment, which isn't wrong.

Young Love
As Alistair is carried off by Rachel, she reminds him to keep his thoughts to himself.

Later, believing that she is sacrificing herself to Galactus, Rachel gives him a kiss goodbye. 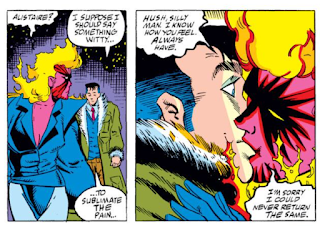 Teebore's Take
Though the cover assures readers that the "Cross-Time Caper" is over, this nonetheless reads like its meant to be the climax to that storyline, a confrontation between Galactus and Phoenix that was setup by their encounter in one of the early "Cross-Time" issues (involving the world that was overrun by super-heroes that turned out to be a creation of the Impossible Man). Of course, whatever narrative weight this issue has as a culmination to the storyline is lessened somewhat by the fact that Galactus' previous encounter with Phoenix, which prompts his actions in this issue, occurred approximately sixty-three issues (give or take) ago, which makes it difficult to remember exactly why Galactus has it out for Phoenix so much.

Nevertheless, there's definitely some fun to be had in the concept of the hugely-overmatched, even with Phoenix, Excalibur battling Galactus, in which an almost-literal deus ex machina is required to save the day despite their efforts. Watching superheroes keep fighting in the face of insurmountable odds is one of the cornerstones of the genre, and with good reason, as it's almost always entertaining. Of course, the art knocks things down a tick or two; had Alan Davis stuck around to draw this, it'd likely be a highlight of the series. As it is, it's a mostly successful exclamation point on the end of the drawn out "Cross-Time Caper", even as it adds to the overall feeling of pointlessness to most of the issues between the first Galactus/Phoenix encounter and this one.

Next Issue
Tomorrow, the "Lazarus Project" continues in Wolverine #28. Next week, Marvel Comics Presents #64-71 and Excalibur #26.