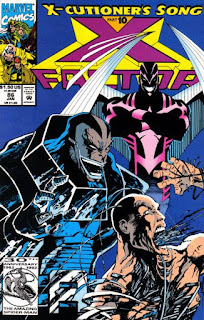 In a Nutshell
Apocalypse cures Professor X of the techno-organic virus.

Plot
Wolverine explains to the X-Men and X-Factor how Cyclops & Jean Grey are being held by Stryfe on Apocalypse's old base on the moon, while Cyclops & Jean, having escaped the base to the surface of the moon, are rescued by Stryfe. As Cable begins recalibrating his teleportation equipment to send him, Wolverine & Bishop to the moon, Havok & Storm assemble a strike team to join them in the rescue effort, while Apocalypse prepares to cure Xavier of the techno-organic virus. As he begins, Havok receives word from Madrox that he's lost contact with his dupe, suggesting the X-Patriots have fled. As Stryfe continues to taunt Cyclops & Jean, Apocalypse successfully cures Xavier, then offers to accompany the X-Men to the moon, and provide them with a ship to get there. Meanwhile, tired of waiting, Bishop, Wolverine & Cable teleport to the moon, only to find the Dark Riders waiting for them.

Firsts and Other Notables
Apocalypse manages to cure Professor X of the techno-organic virus this issue by, essentially (per Beast) giving it a case of "terminal indigestion". Xavier will remain more or less sidelined for the rest of the story, but this marks the end of the threat to his life. 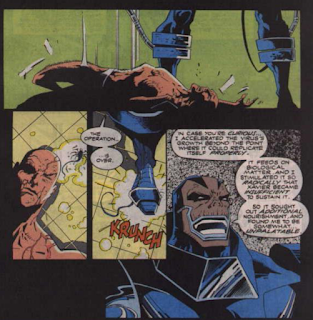 A panel of Stryfe in shadows on the moon from this issue has been used as the cover on some collected editions of this story. 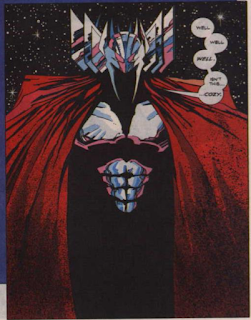 This issue includes one of those great "assembling a strike team" scenes, in which Havok & Storm choose who is going to accompany them to the moon to rescue Scott & Jean. 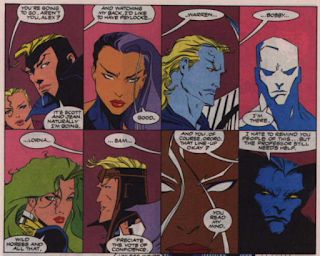 More Stryfe hints: he tells Cyclops & Jean he'll offer them a chance to survive, saying it's the least he can do, since in doing the least he takes after him.

He then tells them he wants them to beg for their lives, the way a child would plead with his parents. 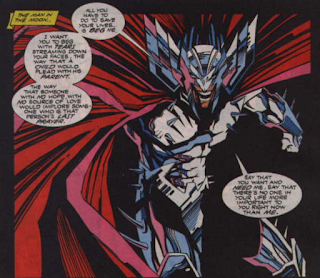 One more quick check-in on the X-Patriots, as the knocked out Madrox dupe is discovered in the hospital room of the missing X-Patriots, and Madrox Prime tells Havok the X-Patriots have probably fled, something they decide to keep from Val. 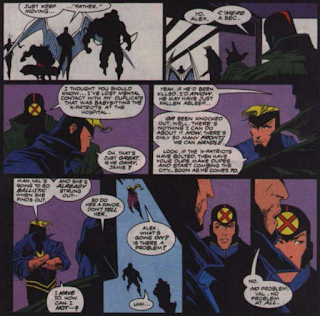 The Dark Riders are featured on this issue's card. 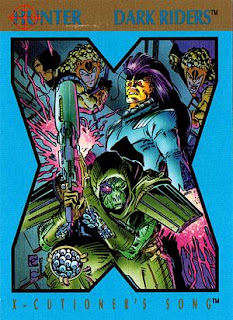 A Work in Progress
Wolverine explains here that Jean must have been trying to contact him telepathically, but because she was so far away, it only penetrated his subconscious, hence the image of the moon he carved into Cable's table in the last issue. 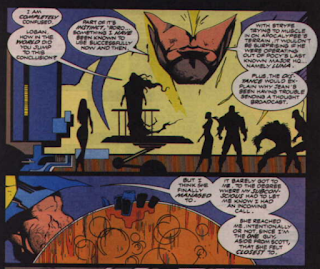 He also suggests that she reached out to him because she feels closest to him after Scott, something which raises an eyebrow for both Beast and Iceman.

There's another "Havok is embarrassed by his team" bit in this issue.

Apocalypse theorizes that one of the reasons Stryfe may have tried to kill him is because he knows Apocalypse can cure Xavier of the techno-organic virus.

Pun with Peter
Cable tells Wolverine & Bishop it will take some time to recalibrate Graymalkin's teleportation equipment to send them to the moon, saying it isn't like Star Trek (a property with which David has a fair amount of experience). 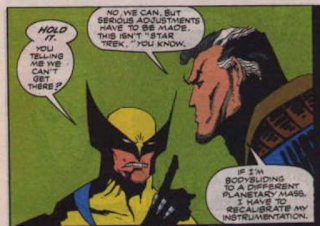 Some fun dialogue between Havok & Storm, as Storm repeats "of course" throughout their conversation.

When Havok says he's going to watch Apocalypse like a hawk, Archangel replies that he does everything like a hawk. 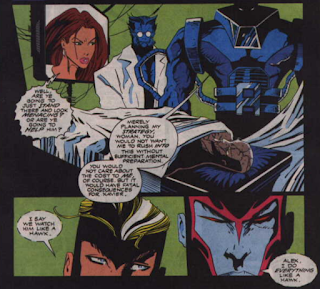 Artistic Achievements
Throughout this issue, as Cable, Wolverine & Bishop wait for Cable's equipment to recalibrate and then give the X-Men strike team a chance to get to the moon, we briefly see a panel at the top of the page that shows them waiting. To show the passage of time, Cable is carving a block of wood, which comes more and more into focus with each subsequent panel, eventually revealed to be a little statue of Domino. It's a neat effect.

Austin's Analysis
Let's get this out of the way: the way Apocalypse-cures-Xavier-of-the-techno-organic virus resolution (one of those things this story routinely gets dinged for) is patently absurd, and not terribly clear (he...supercharges it, which makes Xavier's body insufficient nourishment...but doesn't kill Xavier...I guess?), but it's also no worse than any of the other countless bits of comic book pseudo-science that have popped up through the years. After all, the body that Apocalypse is healing is technically a clone, created after Xavier's original body was transformed into a Brood, and Apocalypse's gizmo isn't any more inherently ridiculous than the Starjammers alien tech which did that.

Aside from the big plot development in which Xavier is cured (which was really always a question of "when", not "if"), this is mostly a time-killing, table-setting chapter of the story, getting things in place for the big climax (to the point that Cable, Bishop & Wolverine spend most of the issue actually just killing time), but Peter David makes the most of it, working in another funny "embarrassed Havok" moment, doing one of those great "select the members of a team" bits, and mining the Cable/Bishop/Wolverine time-killing sequences to comedic effect. And Jae Lee, whose skills aren't exactly suited to quieter, talk-y issues like this, nevertheless creates some effective body horror imagery in the sequences involving Cyclops & Jean Grey stumbling around the moon and being taunted by Stryfe. A necessary bridge chapter, then, but still an entertaining one.