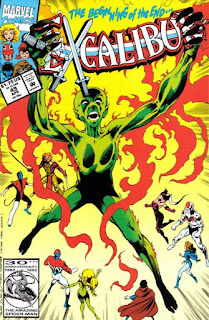 In a Nutshell
Necrom begins his attack on Excalibur.

Plot
FI6 attempts to capture the perpetrator of the recent string of heists, but the perpetrator is Necrom, who absorbs the life force of the FI6 agents to increase his own power. He attempts to do the same to Micromax, but Micromax seems to disappear before he can, and Necrom flies off for Excalibur's lighthouse. At the lighthouse, amid an increasing number of cross-time intrusions, Excalibur debates their next course of action. In London, Inspector Thomas discovers Micromax, who shrank at the last minute to escape Necrom. He wants to warn Excalibur, but Thomas says their communication lines are dead. At the lighthouse, Necrom telepathically contacts Excalibur, explaining that the increase of cross-time breaches is his doing, as the various alternate worlds are collapsing into a singularity that will destroy them all, unless Rachel unleashes the Phoenix Force to stop him. On Otherworld, a mystified Roma is monitoring the collapsing realities when Merlin suddenly appears, declaring that the final gambit begins.

Firsts and Other Notables
The issue concludes with the return of Roma's father Merlin, who seemingly died during the "Jasper's Warp" story in Captain Britain's pre-Excalibur solo series. This reveal may explain why Davis went out of his way to retcon out Possession (beyond just not liking the story), as that story also revealed a not-dead-after-all Merlin, and Davis clearly wanted to reveal that here. 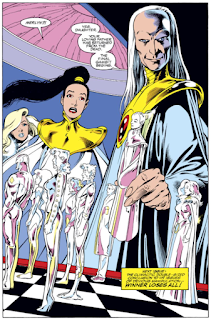 Feron is on hand along with the rest of the team (and fairly snooty about Rachel's mishandling of the Phoenix Force and being treated like a kid by Excalibur), but I don't believe he's officially joined the team or anything at this point.

We get glimpses of a variety of different alternate worlds throughout the issue, and Necrom reveals he is causing the various realities to collapse in on themselves, ultimately threatening all existence, as a tactic to force Rachel to unleash the Phoenix Force to try and stop him. 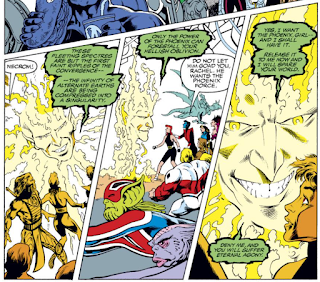 Connected to that, Captain Britain grows increasingly clumsy throughout the issue, culminating in him turning into, basically, a Captain Britain Hulk, and prompting Excalibur to wonder if Roma has really lifted the jinx she put on him; next issue reveals that his transformation is the result of him inheriting the power of the other Captain Britain's from the collapsing realities.

Cerise detects some kind of Fourth Dimensional barrier protecting Excalibur from the time distortions happening around them; I believe this gets attributed to Phoenix next issue. 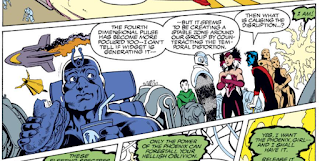 Of the various alt-realities we see, I think my favorite is the one in which a chef Captain Britain apparently fights Magmeato's Brotherhood of Evil Vegetarians. 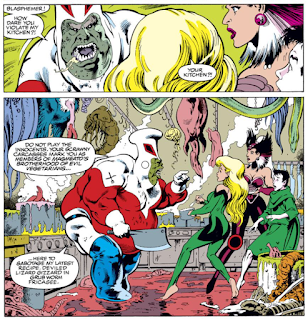 The cover is an homage to X-Men #56, with Necrom taking the place of the Living Monolith (of course, X-Men #135 also homaged that cover, with Dark Phoenix).

A Work in Progress
This issue establishes that FI6 is made up of the best soldiers culled from Britain's military, but it doesn't really matter, since Necrom kills most of them, including their leader, "Inky" Blott.

Austin's Analysis
The penultimate issue of the Necrom storyline (and, really, Alan Davis' solo run to date), Davis continues to impress by playing with expectations. Usually these kinds of issues feature some kind of confrontation between the heroes and the villain, in which the heroes are trounced but valiantly promise to come back and beat the villain in the end. Here, Excalibur hasn't really even come to face-ro-face with Necrom yet, barely understand the threat he poses, and have no obvious inkling how they're going to defeat him, with their best weapon (Phoenix) off the board. The end result is a feeling that things are even more dire than if Excalibur had just lost a direct confrontation; they're so far out of the game at this point, they don't even know HOW to fight Necrom. It's a great "things are always darkest" feeling heading into the conclusion, with even the last minute appearance of Merlin adding to the effect, as it's uncertain whether his return is a good or bad thing.

Next Issue
Tomorrow, Wolverine battles Mojo at the end of time in Wolverine #53. Next week, Uncanny X-Men #288 and X-Force #10.