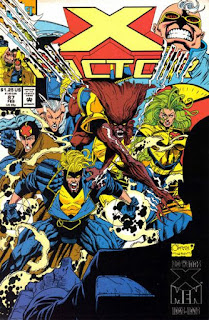 In a Nutshell
X-Factor gets psychoanalyzed by Doc Samson.

Plot
In the wake of recent events, each member of the team meets with a psychiatrist for counseling. Wolfsbane discusses identity issues and her relationships with authority figures. Quicksilver offers up an explanation for his constant irritability. Polaris discusses her body image issues and fear of being controlled, then angrily shows off a new costume. Strong Guy tells the story of the first time his powers manifested, while Madrox admits to a fear of being alone. Finally, Havok talks about feeling inferior to his brother. After their sessions, Val Cooper meets with the psychiatrist, Doc Samson, and displays a shocking ignorance of the mental state of her team, something which outrages her when Samson points it out to her. As she storms out of his office, she is attacked by some kind of creature with massive tentacles, and dragged away.


Firsts and Other Notables
Another epilogue of sorts to "X-Cutioner's Song", this issue features each member of the team receiving therapy in the wake of the events of the crossover from an unseen psychiatrist who, in the final panels of the issue, is revealed to be longtime Hulk supporting character (and token Marvel psychiatrist) Doc Samson (his dialogue bubbles throughout the issue are also tinged green on the edges, a hint at this identity). 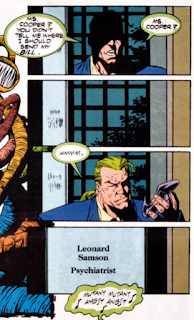 This issue also marks the beginning of Joe Quesada's short run as the series' new regular artist. He will only last through issue #92 (and will get help drawing issue #90, while #91 is drawn entirely by a fill-in artist), though he does outlast Peter David (who leaves the series with issue #89). Quesada, who also drew X-Factor Annual #7) will, of course, eventually come back to Marvel as part of the Marvel Knights imprint in the late 90s (where he'll draw Kevin Smith's Daredevil relaunch), the success of which he'll parlay into becoming Marvel's overall Editor-in-Chief from 2000 to 2011, making him the longest-tenured EiC (to date) behind only Stan Lee.

The "Polaris has body issues" subplot that has been simmering more or less since Peter David took over essentially culminates in this issue with Polaris...getting a sexy new costume. It's presented her as an act of empowerment on Polaris part, and I think David means well, but it's also really hard not to read this plotline as nothing more than "woman who thinks she's fat loses weight and wears a costume designed to titillate". 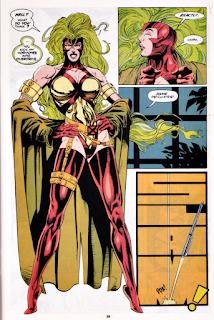 This issue contains what is probably my single favorite Quicksilver moment, one which I highlighted here, in which he explains his constant snottiness and anger as the result of his entire life feeling like he's in a hurry but stuck in line behind a guy who doesn't know how to use the ATM. 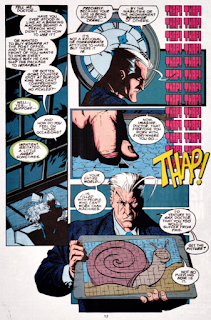 It's established here that Guido's exaggerated physical features are the result of his powers, in that his body physically reacts to the absorption of kinetic energy, and if he doesn't release it, his body will remain swelled, which happened the first time his power manifested. As a result, he says he is in constant agony. 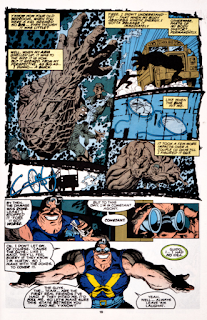 Throughout the issue, panels depicting colored bags of garbage are periodically inserted among the regular goings-on of the story; on the final page, these bags form some kind of garbage monster that attacks and drags away Val Cooper. Issue #92 reveals this to be some sort of creature sent by the Acolytes to implant Val with a parasite that gave them control over her; however, that issue isn't written by David, and it seems unlikely that was his intent when he wrote the scene in this issue, though I have no idea what, if anything else, David had in mind. 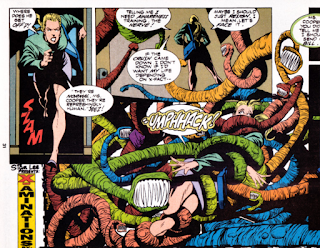 This issue fills the bottom corner cover box (which usually contains either the UPC code for newsstand books or some kind of illustration or ad in Direct Market books) with an image celebrating the X-Men's 30th anniversary in 1993; it will be featured on the cover of most X-books (and other Marvel titles) throughout the year.

Creator Central
Shana David is credited in this issue; she suggested the idea of the Ren & Stimpy parody.

A Work in Progress
The whole "Quicksilver doesn't wear an official X-Factor uniform!" topic from the letters page makes its way into the comic itself, as Doc Samson asks him about it directly. 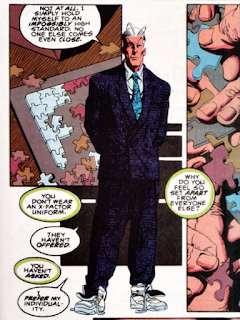 As of this issue, Polaris' jaw has healed and she's had the brace removed; her big takeaway from the experience is that it helped her lose weight.

Polaris mentions times when other people got into her head and controlled here, references to her long-time possession by Malice and her earlier, shorter stint as a braindwashed stooge of Erik the Red. 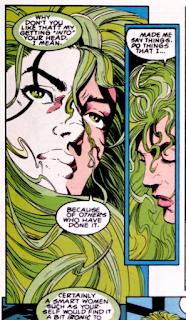 The Grim 'n' Gritty 90s
As a follow-up of sorts to the previous "Rahne's World" Wayne's World parody, this issue opens with Rahne describing a dream in which she is the star of a Ren &Stimpy parody, "Rahne & Simpy" (with Feral as Simpy). 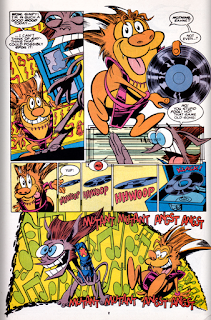 Young Love
Rahne says that it hurts when she's not near Havok. 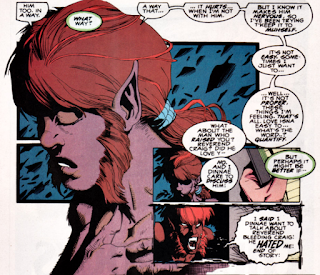 The Awesome and Terrible Power of Cyclops Havok
Havok tells Doc Samson he feels like he's constantly being compared to his brother. 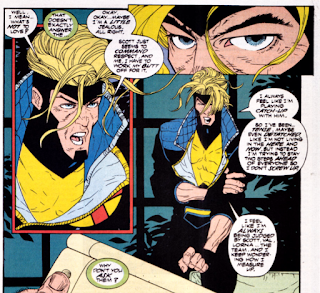 Austin's Analysis
This issue routinely gets cited as the best issue of Peter David's original X-Factor run (and sometimes his best issue of X-Factor, period), one of (if not the best) issue of X-Factor overall, and one of the best single issues to come out of the 90s. Neither a Classic Claremont Quiet Issue nor a Lobdellian Post-Crossover Quiet Issue (though it shares characteristics with both), the focus here is almost entirely on characterization, as David uses the device of the characters getting checked out for PTSD in the wake of "X-Cutioner's Song" by the Marvel Universe's resident psychologist Doc Samson as a vehicle to dig into and explore the psyche of every member of the team, deepening and expanding their characterization in the space of a few pages each. In the process, he shows, amongst other things, the pain at the heart of Strong Guy's jocularity, the irony of Madrox' loneliness, and offers up what is the definitive portrayal of Quicksilver in explaining just why he's such an arrogant ass all the time.

David is joined by Joe Quesada, and while Quesada's previous work on the series' "Shattershot" annual was more posed and action-orientated, he matches up well here with the quieter focus of the story, using lots of closeups on faces and body language to express emotion: Rahne's doe-eyed naivety, Quicksilver's permanent sneer, the way Jamie's droopy Quesada Hair highlights his sadness at the prospect of being alone, Havok collapsing into his seat, as if forced down by the burden of living up to his brother's example. The art isn't just depicting scenes of characters talking, it's helping show, underline and/or contrast what readers are being told via dialogue. The Image-esque Quesada (especially at this time) may not seem like a good fit for this quieter type of story, but he acquits himself well here.

If this issue has any drawbacks (aside from Polaris' scenes mostly dealing with her questionably body image storyline), it's the weird garbage tentacle monster subplot that concludes the issue by attacking Val, if only because hindsight shows this to be an ultimately superfluous plotline aborted by David's departure and then hastily resolved by his successor, the one bit from the issue that doesn't stand the test of time. Everything else is fantastic, though. This is hardly the first time a series devoted an entire issue just to character development, nor will it be the last (becoming more and more prevalent in the modern era), but rarely is it ever done this well.

Next Issue
Tomorrow, more memory shenanigans in Wolverine #66. Next week, X-Men #17 and X-Force #19.