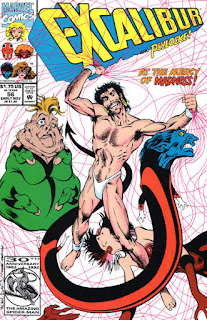 "Things That Go Shriek in the Night"
Early November 1992

Plot
As Sat-yr-9 orders her troops to find Kitty Pryde, Kitty, hidden inside one of the mansion's walls, passes out from the pain of her encounter with Jamie Braddock. Hours later, with Jamie asleep after warping Excalibur into misshapen messes, Psylocke manages to telepathically reach Captain Britain, who's been drugged under Sat-yr-9's control. They discuss the situation, but Jamie forces his way into their mindlink, and pulls Psylocke out. Her cries of pain wake up Kitty, who manages to knock out some of Sat-yr-9's troops and abscond with a uniform. Upstairs, a jealous Nigel attempts to kill Captain Britain, but Sat-yr-9 kills Nigel instead. Downstairs, Kitty manages to get close to Jamie posing as one of Sat-yr-9's guards, but her ruse ultimately fails. However, she buys enough time for Meggan to shake off Sat-yr-9's drugs, after which she reveals that she's immune to Jamie's power. She attacks him, snapping the rest of Excalibur back to normal, and together, they manage to rout Sat-yr-9 and Jamie, but given their weakened state, are unable to pursue them as they flee. Later, the team attends the funeral of Alysande Stuart, at which Nick Fury appears and reveals that she was framed, given Alistair information he may able to trace to the culprits.

Firsts and Other Notables
Excalibur manages to defeat Sat-yr-9 and Jamie Braddock, but both escape after leaving Excalibur in no position to pursue them; it will be quite some time before either appears again.

Nigel Frobisher, who first appeared in the first issue of the series, dies here, killed by Sat-yr-9. He has not returned. 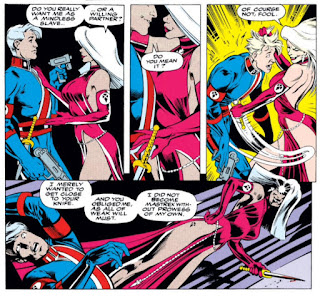 This issue establishes that Meggan is immune to Jamie's power, and that she was affected last issue only because she had been drugged by Sat-yr-9's troops. 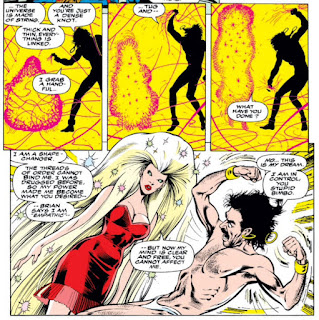 Nick Fury pops up at the end of the issue to confirm that Alysande Stuart was framed; I have no idea where, if anywhere, this is going. Especially since Alysande is dead. 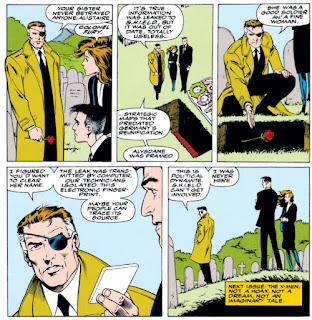 This issue marks the beginning of a seemingly-random three month stretch in which the series is published bi-weekly. I have no idea why - no other Marvel books are bi-weekly at this time, and there's no mention of it in the letters page. Maybe an attempt to capitalize on the increased profile of the other X-Books during "X-Cutioner's Song" (which runs contemporaneously to the bi-weekly shipping here), even though Wolverine neither participates in the crossover or receives bi-weekly shipping?

A Work in Progress
Limitations to Jamie Braddock's power are mentioned, specifically that he can only warp reality within a limited area and thus can't, like, completely overhaul everything everywhere. 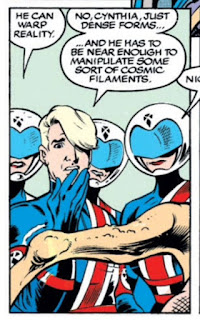 The whole "crime lord Vixen is now a fox, and Nigel Frobisher gets turned into the human female Vixen" thing gets brought up, just before Nigel is killed and it all becomes moot. 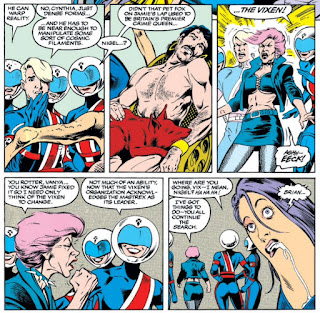 Sat-yr-9's history, most of which was established in Captain Britain's UK series, gets recapped, as well as the circumstances of her escape to Earth-616 and replacement of Courtney Ross in early issues of this series. 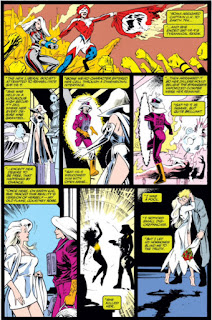 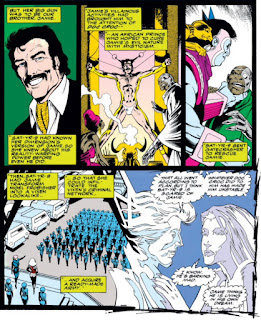 Claremontism
Psylocke explains to her older brother about her psychic knife. 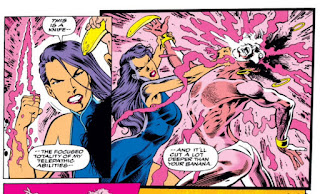 Young Love
It's pretty heavily implied that Sat-yr-9 is using a mind-controlled Captain Britain as her sex slave.

It's in the Mail
A letter in this issue asks about Amanda Sefton (Nightcrawler's girlfriend/adopted sister); the response promises she'll be appearing soon, but it will be awhile yet before she pops up in this series.

Austin's Analysis
Parallels to "Dark Phoenix Saga" continue this issue, with Kitty striking alone from the shadows, while the rest of the team is under the mental sway of a power-mad villain, complete with some S&M undertones. But Davis goes beyond a mere pastiche, and does an impressive job of working the entire team into the defeat of the villains. In addition to Kitty's efforts, Meggan turns the tide by revealing herself immune to Jamie's power, while Nightcrawler takes charge, Cerise protects him, Psylocke lands the final blow on Jamie, and Captain Britain overcomes Sat-yr-9's mental control.

The end result makes for a thrilling little two-parter that, like so many of Davis' stories, is both entertaining in its own right, while also clearing up a lot of the series' narrative clutter (it is to Davis' credit that a story with this many pages of what is essentially recaps of old Captain Britain stories is still so fun). If anything, the biggest fault of this story is that's too short - not necessarily because events are rushed or that it needs more pages, but simply because it's so well done and enjoyable, with Sat-yr-9 & Jamie making for such cool & creepy villain, that I just don't want it to be over already.