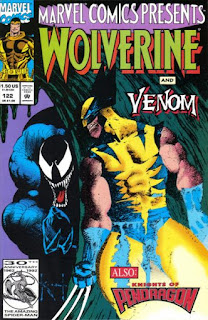 In a Nutshell
Wolverine & Venom team-up against Nightmare.

Plot
Suffering from recurring nightmares and suspecting Nightmare as the culprit, Wolverine enlists the aid of Professor X, who puts Wolverine's consciousness onto the Astral Plane, where he comes face to face with Venom. The pair fight, with Venom insisting he's the hero of his dream, which means Wolverine must be the villain, but eventually, they put aside their differences to attack Nightmare together. But upon reaching him, Nightmare laughs, saying that Wolverine has been a pawn all along, that Nightmare wanted Wolverine to turn to Professor X for help so Nightmare could access Xavier's mind through Wolverine's, thus escaping the astral plane. However, Xavier suspected as much, so as Wolverine & Venom attack Nightmare on the astral plane, Xavier does so telepathically as well, and when Wolverine stabs Nightmare in the head with his claws, the villain disappears, and both Wolverine & Venom are returned to their bodies.

Firsts and Other Notables
Sam Keith is back to draw this story, following his work on the introductory Cyber story and issue #100.

The big selling point of this story, at least in 1993 (aside from the Keith art) is that it puts Wolverine & Venom against each other, then teams them up. This story comes as Venom's profile is being raised and he's transitioning away from being a full-on villain and more of a violent anti-hero, with the first issue of his Lethal Protector miniseries going on sale the same month this story ends. 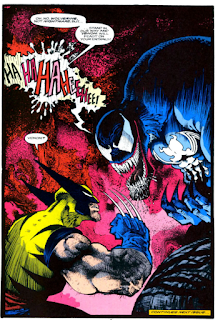 The plot of this issue follows on from events in issues #99-100, which featured Nightmare menacing first Wolverine (in #99) and then an assortment of frequent MCP players (in #100, the rare issue which told one single, full length story). I didn't review either because the Wolverine portion is fairly minimal, and isn't terribly important outside of setting up this story (also, frankly, because I didn't need to slot that story in for whatever reason, whereas this story is getting reviewed because I needed something to pair with one of Excalibur's rando bi-weekly issues and the timing of its on-sale date worked out for that).

Aside from Wolverine, Venom, and Nightmare, Professor X makes a couple appearances at the beginning and end of the story.

Starting with issue #119, Joe Madureira starts drawing one of the issues' two covers. The upcoming Deadpool limited series (which he will draw) is also mentioned in the letters page.

Madureira also draws a Mirage story in issue #121, marking the characters only appearance between her departure from the New Mutants in New Mutants #87 and her return in X-Force #27. It's a fairly straightforward story involving a Cheyenne deity trying to force her out of Asgard, saying she's denied her heritage by becoming a Valkyrie, with Dani ultimately declaring she's of both worlds now and needs to remain in Asgard for the time being. Nothing terribly consequential, but still nice to see the character again. 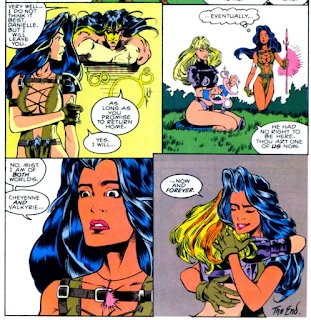 Issue #119 has a Wonder Man/Mojo story in it, an odd fit on one hand, but given Wonder Man's acting history, also not an odd fit.

The Chronology Corner
Wolverine appears in this story between issues #65 and #66 of his regular series, between issues #11 and #12 of X-Men, and after his appearances in "Infinity War" and a bunch of other stuff I'm not reviewing.

A Work in Progress
In issue #118, Wolverine talks like he's familiar with Venom, but as far as I can tell, the characters have never met prior to this story (and it's not like Spider-Man is regularly feeding info on his foes to other heroes).

Dani uses her spirit lance in the Mirage story, which is, I believe, its last appearance (when she nexts appears, her powers will manifest differently, and the whole "wish things into being" element will, thankfully, be gone). 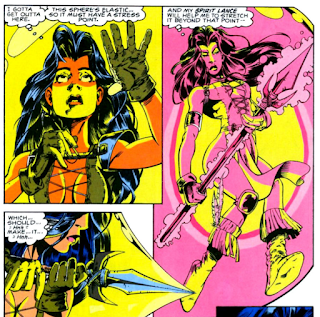 She also acknowledges that while she needs to remain in Asgard now, she will eventually return home (which proves to be true).

Young Love
In issue #118, Wolverine is fooled by someone who looks like Mariko. 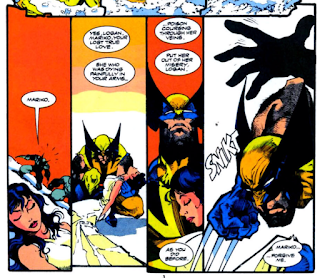 And in issue #121, he mentions that her death is still fresh in his mind, robbing that moment of the power Nightmare hoped it would provide. 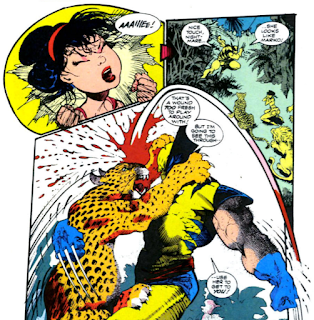 Austin's Analysis
Like the Peter David-penned Marvel Comics Presents story which introduced Cyber, this is another story that ultimately exists as a vehicle for Sam Keith to do wild and crazy stuff in the art. Unlike that earlier story, it offers nothing in the way of character development for Wolverine or makes any contribution to the larger X-narrative. The use of Nightmare, while following up on an earlier MCP story, is ultimately just a vehicle for Keith to not have to operate within any semblance of reality, and the pairing of Wolverine with Venom, while certainly commercially viable at this point in the 90s, offers up very little as well: the two characters don't really have much of a connection, either in terms of in-universe history or thematic similarities, before or after this story. The Keith art helps this rise above the usual Marvel Comics Presents dreck, in that it's at least fun to look at, but there's barely any story here at all, and what there is, is of little note or consequence.
Newer Post Older Post Home
Posted by Austin Gorton at 12:00 PM