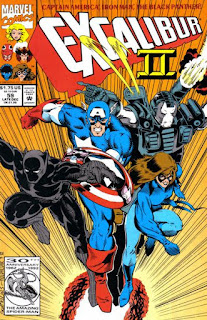 Plot
With Brian & Meggan visiting Wakanda on business, Kitty stows away to soak up some tropical sun. At Black Panther's palace, Brian & Meggan are introduced to Captain America & Iron Man, who will be partnering with Black Panther & Braddock Enterprises on the proposed project. Meanwhile, Nightcrawler & Cerise leave for a night at the opera. In Wakanda, the heroes gather for dinner to discuss Braddock Enterprises' self-devouring waste containment process, but the group is attacked by Icon, a Wakandan who wants to return the country to its more isolationist roots. At the opera, Nightcrawler & Cerise are witness to an attack on an arms dealer by the vigilante Knight Errant. In Wakanda, not knowing Brian & Meggan's superhero identities, Black Panther gets them out of the fight, but he, Captain America & Iron Man are surrounded by Icon's brainwashed followers, and Icon declares that Black Panther can abdicate the throne to Icon, or stand by as his people die. However, Kitty is alerted to the attack, and helps Brian & Meggan slip away so they can join the fight against Icon.

Firsts and Other Notables
This story finds Captain Britain in Wakanda on behalf of the previously-unmentioned Braddock Enterprises, a company that was apparently run by his older brother Jamie at some point (something that doesn't really fit with what we know of Jamie Braddock). I don't think any of this ever gets referenced again. 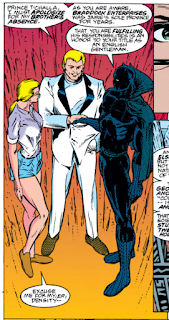 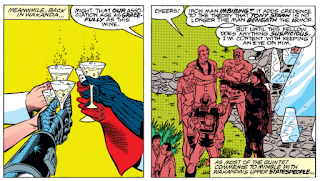 This story features two characters which make their first appearance here, and their final appearances next issue. The first is Icon, a native Wakandan who can transform his body into wood (and his head into some kind of ceremonial mask). 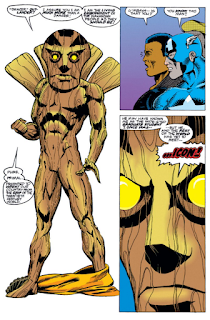 The second is Knight Errant, a retired millionaire industrialist who fights crime with knight-themed advanced weaponry. 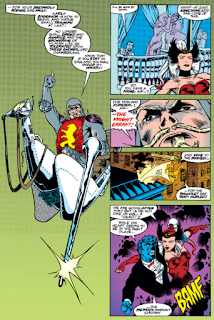 The issue ends with Kitty declaring the group of assembled heroes a new Excalibur, but this iteration of the team doesn't catch on like, say, the New Fantastic Four did.

Creator Central
Fill-in art comes from Scott Kolins, whose later work I rather like (chiefly on Geoff Johns' Flash and the 00s Marvel Team-Up revival), but has yet to develop his signature blocky style as of this story.

A Work in Progress
Meggan is wearing glasses in this issue, as part of her ruse of posing as Captain Britain's assistant, in order to protect his secret identity.

She also references Excalibur's encounter with the West Coast Avengers in issues #37-39, not realizing that was a different person inside the Iron Man armor (and also forgetting about her "secret identity"). 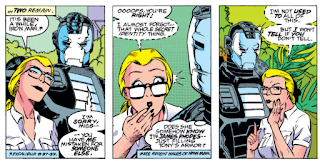 Nightcrawler & Cerise are taunted by an arms dealer named Raleigh Chamberlain, who is later targeted by Knight Errant. He's presented like someone they already know, but this is his first (and only) appearance. 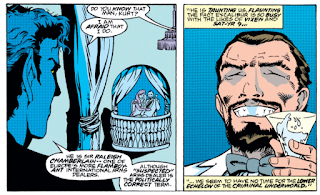 Young Love
Nightcrawler & Cerise go on a date in this issue. 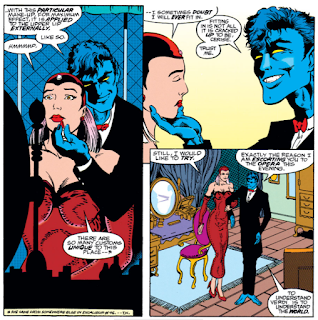 Austin's Analysis
I'm not quite sure what to make of this. I mean, it's ultimately just another superfluous two-part fill-in story, only without Alan Davis in any capacity, Joe Madureira on art, a long overdue X-Men team-up, or a fun check-in with some old Louise Simonson X-Factor characters. But beyond that, it seems like there's some weird racial politics at play, like how the story is constantly going out of its way to point out how Wakanda is technologically advanced, unlike all the other "usual" African nations. Or the way T'Challa holds a big fancy dinner and then serves pizza, much to the other characters' surprise, which seems like Lobdell attempting to deflate stereotypes, but which has the uncomfortable side effect of making the title characters look dumb for needing those stereotypes corrected in the first place. Or Icon, a villain fighting to restore tradition to Wakanda by transforming into a living idol, which is either empowering or insulting. Or Meggan turning into a black woman to protect her and Captain Britain's secret identities, which makes sense, but also seems...questionable. Certainly, I think Lobdell was well-intentioned here, and it could just be that I'm reading too much into things. But that's what happens when there's so little meat to the actual story.