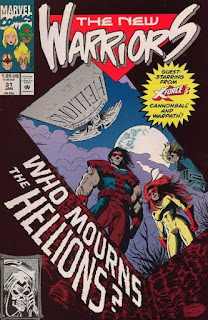 In a Nutshell
The Hellions get a send off while Magma and Nova Roma get a retcon.

Plot
Cannonball, Firestar & Warpath journey to Nova Roma, in order to inform Magma & Empath about the recent deaths of the rest of the Hellions. When they arrive, they find Magma acting odd. Suspecting Empath of controlling her, Firestar sets out that night to investigate, only to discover Empath has taken control not only of Magma, but also Cannonball, Warpath and all of Nova Roma. Eventually, Firestar is able to use her powers to break Empath's control, at which point a confused Magma forces Empath to reveal the truth: Nova Roma is a lie, created by Selene, and its people aren't descendants of Roman settlers. In Selene's absence, her control over the people in the city started to fade, and Empath, loving his life there with Magma, took over, enforcing the lie. Now, he reluctantly agrees to help all of Nova Roma reclaim their lives, even though it means giving up a place he loves. Later, Warpath returns to the Massachusetts Academy and, with Firestar & Cannonball, burns the White Queen's secret files on the Hellions, giving the group a funeral of sorts.

Firsts and Other Notables
This issue is an epilogue of sorts to the slaughter of the Hellions at the hands of Trevor Fitzroy back in Uncanny X-Men #281 (and #282 to a lesser extent), as Cannonball joins former Hellions Warpath and Firestar to go to Nova Roma to give their former teammates Magma and Empath the news. 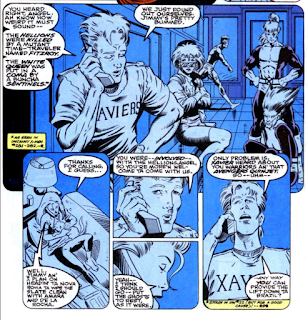 This issue also introduces a fairly dubious retcon to Nova Roma in general and Magma in particular, as Empath reveals that the whole "descendants of Romans living in South America" thing was an illusion created and maintained by Selene, and that the people in Nova Roma have been kidnapped by Selene and made to think they're descendants of Romans. Thus, Magma isn't really Amara Aquilla, but an Englishwoman named Allison Crestmere. While a fairly radical upending of Magma's history, nothing really comes of this idea, and the next time she's used regularly (in the early 00s, pre-"M-Day"), it's eventually established pretty quickly that Empath is lying here and the original Nova Roma origin is correct. 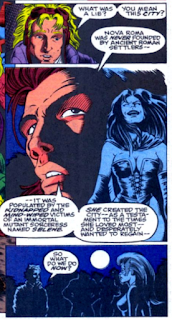 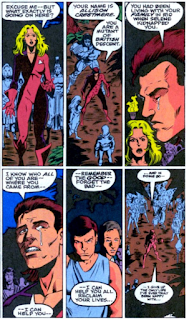 Firestar gets a new costume at the end of this issue, replacing her original look inspired by the character's appearance on Spider-Man and His Amazing Friends. 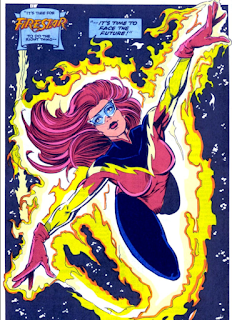 The Chronology Corner
Cannonball & Warpath appear here while still technically under house arrest at the X-Mansion, between X-Men #17 and X-Force #19 (X-Men #17 has a scene setting up their appearance in this issue).

This is the first appearance of Magma & Empath since New Mutants #81 (though Magma has been mentioned in passing a few times since then). Both will next appear in the X-Force/New Warriors crossover "Child's Play".

A Work in Progress
An angry Firestar declares that no one will ever control her again, at the very least an indirect reference to how she was manipulated by the White Queen in her limited series. 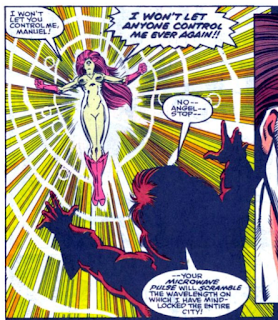 Lest we feel too bad about Empath's sorrow over losing Nova Roma, the only place he's ever been happy, remember that this is the guy who nearly made Tom Corsi & Sharon Friedlander sex each other to death.

Casually tossed aside in Uncanny X-Men, Cannonball, Warpath & Firestar return to the Massachusetts Academy to give the Hellions something of a sendoff. 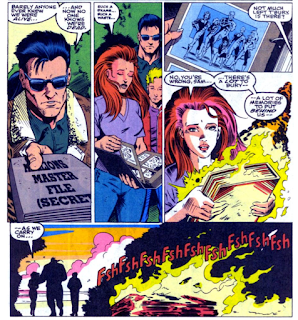 Incidentally, the fact that Warpath joined up with the New Mutants/nascent X-Force in the first place because he believed the White Queen ordered the massacre of his reservation never gets brought up here.

Austin's Analysis
This issue manages to both give a dangling plot thread some much needed closure, and also introduce one of the franchise's most pointless retcons. After the Hellions were unceremoniously killed off in Uncanny X-Men #281, no attempt was made in either X-Men book (where they died) or X-Force (where the characters who interacted the most with the Hellions were) to show how that would affect their surviving members and the New Mutants who knew them best. So kudos to Nicieza for picking up that dropped ball. It's just one issue, and much of it gets overshadowed by the retcon, but the tacit acknowledgement of the history between these various characters and how the events of Uncanny #281 affect that is very much appreciated, and stands as another example of the post-Image Exodus creators attempting to restore a sense of history and continuity to the series.

But then Nicieza goes and squanders all that goodwill by using this issue to introduce the bizarre idea that Nova Roma is a fake, and that everyone there, including Magma, are people Selene brainwashed into thinking they were descendants of Romans living in the Amazon as part of a massive nostalgia kick on her part. Look, I don't love Nova Roma either, and it stands as one of Claremont's weaker ideas, but in attempting to have it make MORE sense, Niceiza just makes it even more ridiculous. The biggest problem is that Nicieza (nor anyone else) ever really does anything with this idea - there's not really any fNova Roma stories in the future, and aside from an appearance in the upcoming "Child's Play" crossover and a brief stint as a quasi-villain later in X-Force, Magma doesn't really get used much for years.

So while it's possible, given time and some well-written stories, this retcon could have worked, instead, it's just sort of getting thrown out there, like it solves all of Nova Roma's credibility problems just by existing. As a result, it mostly gets ignored from this point on, aside from Magma's real name getting listed as "Allison Crestmere" on the backs of trading cards and in reference material for a few years, until eventually it gets re-retconned out of existence just as effortlessly and Nova Roma goes back to just being the bizarre, anachronistic enclave of Rome in South America it always was, making the whole "Allison Crestemere" business seem even more pointless in the end.