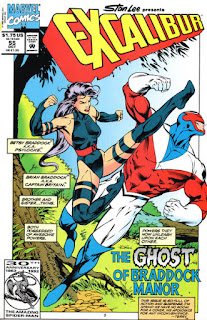 "The Ghost of Braddock Manor"
October 1992

Plot
Captain Britain & Psylocke spar with one another, while Kitty & Meggan return home from a shopping trip to find Nightcrawler practicing martial arts as well. Meanwhile, Kylun says goodbye to Cerise before leaving to visit his parents. That night, Excalibur hosts a party at Braddock Manor, with Courtney Ross & Alysande Stuart in attendance, among others. Outside, a meditating Feron is attacked by a shadowy figure, and later, Alysande is attacked in her room as she changes clothes. As Excalibur rushes upstairs at the sound of her cries, the lights go out, and when they reach her room, they discover her body, badly mangled. Just then, Psylocke detects fear from the guests downstairs, and Nightcrawler teleports there, but is taken out by a second assailant. As Captain Britain, Psylocke & Meggan follow him, Alysande's killer knocks out Cerise & Alistair, but Kitty escapes. Downstairs, Captain Britain discovers one of the attackers is Courtney Ross, who reveals herself as Sat-yr-9 just as the other attacker appears with an unconscious Psylocke: Captain Britain & Psylocke's older brother, Jamie.

Firsts and Other Notables
Psylocke guest stars in this issue, picking up where X-Men #12 left off, and Captain Britain shares with her his concerns about his increasing tendency to resort to violence as a first resort when faced with a problem. This also marks the first time Alan Davis draws Asian Psylocke. 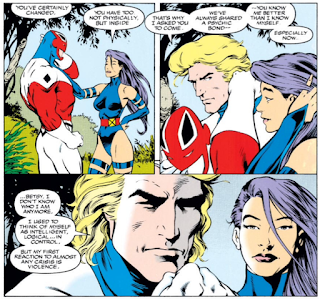 Captain Britain (and the rest of Excalibur) finally learn that the Courtney Ross they've been interacting with since issue #5 is actually Sat-yr-9, the evil alternate dimension counterpart of Saturnyne (this is also the "Courney Ross" who befriended and mentored Kitty when she returned to Earth sans the rest of the team towards the end of the "The Cross-Time Caper", up through "Girls School from Heck"). 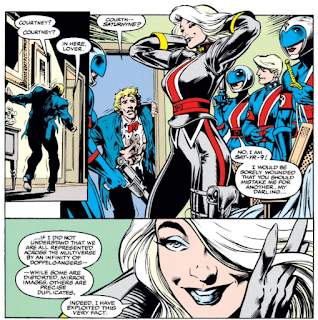 Jamie Braddock, Captain Britain & Psylocke's deranged older brother with reality warping powers, last seen in issue #27, also returns this issue, and attacks Excalibur in conjunction with Sat-yr-9 (with whom he is allied via Nigel Frobisher, who also appears in this issue as "Courtney's" date to the party). 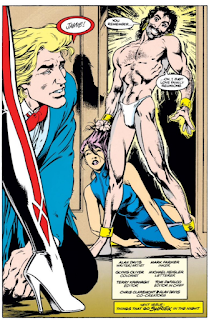 Brigadier Alysande Stuart, head of WHO and Alistair's sister, dies this issue, killed by Jamie Braddock. Surprsingly, she had remained dead; this is her last appearance (though for some reason, she's referred to as "Alysdane" throughout this issue). 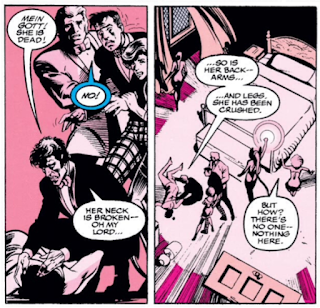 Kylun leaves this issue to reconnect with his family; he'll return in issue #63. 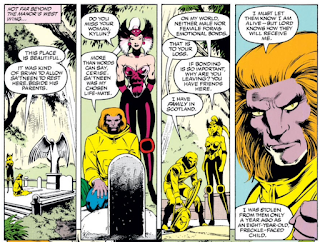 The cover of this issue is laid out like an internal page, with a note saying the story is so big, it needs every possible page.

A Work in Progress
Captain Britain references a psychic bond with Psylocke; I'm not sure if this is meant in a more general "twins can have eerie psychic powers with each other" kind of way, or if the pair has a previously-established, legitimate within the confines of a world with actual psychic powers, kind of psychic bond.

Nightcrawler is practicing hand-to-hand combat, albeit a more aggressive style than usual, something he says is necessary if he's going to lead Excalibur. 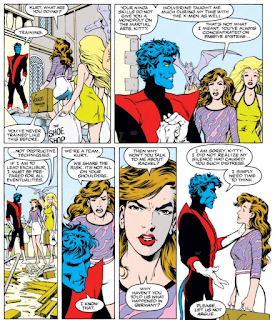 He's also apparently not talking about the events of Marvel Comics Presents #101-108, either.

Inspector Dai Thomas and Emelia Witherspoon, the psychic who was working with Scotland Yard is issue #44, are attending the party as well.

Prior to her death, it's revealed that Alysande us being court-martialed (which seems like an attempt by Davis to show why Alysande briefed Excalibur aboard a helicarrier in Air Apparent). 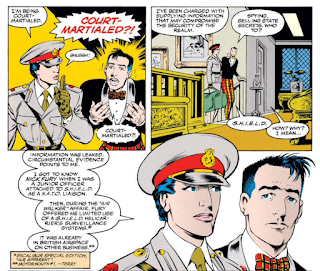 Her defense of Muir Island against the Readers in Uncanny X-Men #253-255 is also referenced.

For some reason, when Excalibur hears Alysande scream from upstairs, Nightcrawler runs up the stairs along with everyone else, but later, when his attention is drawn back downstairs, he teleports there. Given the scream, it seems like he probably should have least teleported to just outside her door rather than running with everyone else. 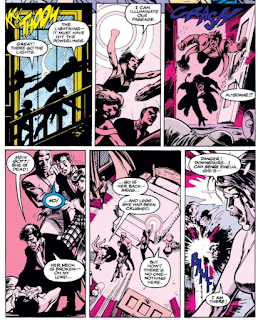 Widget appears briefly in the midst of Jamie and Sat-yr-9's attack on Excalibur. 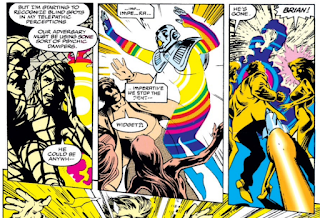 Young Love
When "Courney" arrives at Braddock Manor, she greets Brian with a big kiss. Which prompts a similar response from Meggan. 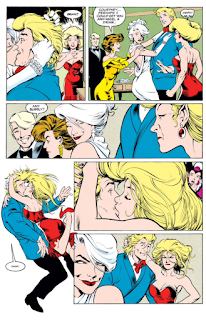 This, in turn, prompts Cerise to kiss Nightcrawler, which more or less marks the beginning of their relationship. 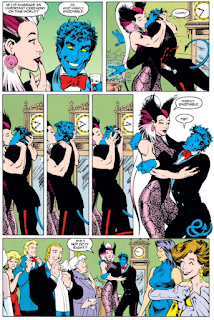 Austin's Analysis
Whether intentional or not, there are shades of the opening of the middle act of "The Dark Phoenix Saga" all over this issue: the heroes engaging in a fancy dress party at a mansion, the looming sense of menace, everyone getting picked off one-by-one by unseen assailants, someone the heroes thought was a friend is revealed to be attacking them, one lone hero is left standing (and it's Wolverine trainee Kitty Pryde) and one of the villains is revealed to be a massively-powered individual with a personal tie to the heroes. After several issues of loose-end-typing, fill-in and standalone stories, this is a welcome return to a more traditional superhero narrative (though this is still also all about tying up loose threads, in this case, the long-simmering Sat-yr-9/Jamie Braddock subplot), but Davis is careful not to abandon the book's emphasis on characterization, keeping that in the forefront as the threat builds in background. Just great, great stuff.