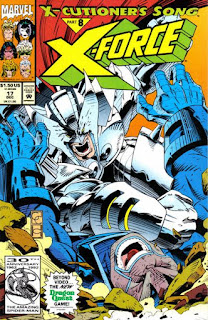 "Sleeping with the Enemy"
December 1992

In a Nutshell
Stryfe fights Apocalypse.

Plot
Stryfe attacks Apocalypse, savagely beating him before stabbing him with the ancient sword bearing his likeness, but Apocalypse manages to reach his teleporter and escape. In the wake of Apocalypse's defeat, the Dark Riders pledge themselves to Stryfe. Meanwhile, aboard Graymalkin, Cable shares all he knows about Stryfe with Wolverine & Bishop. At the X-Mansion, Beast & Moira attempt to remove the virus from Xavier at the point where it entered his body, his head, while Cannonball checks in with the rest of the still-imprisoned X-Force. Elsewhere, Cyclops & Jean Grey take advantage of Stryfe's absence to attempt an escape, while at the X-Mansion, Apocalypse suddenly teleports into the house. declaring that the only way they can defeat Stryfe is to battle him together.

Firsts and Other Notables
The centerpiece of this issue is the big Stryfe/Apocalypse fight, and it's filled with tons of hints at Stryfe (and Cable's) origin, to the point that it more or less walks as far up to the "Cable & Stryfe are Nathan Christopher" line as it can without crossing it. First, Stryfe declares that Apocalypse owes him for everything that's gone wrong in his life (since Apocalypse caused Nathan Christopher to be sent to the future, a world ruled there by Apocalypse), and that he owes a world for the wrong he foisted upon it (which could be a reference both the future Apocalypse rules, or the present, in which Stryfe, twisted by his childhood, is wreaking havoc as a villain). Stryfe then declares the cries of agony from the people in that world to be nothing compared to the cries of an abandoned child. 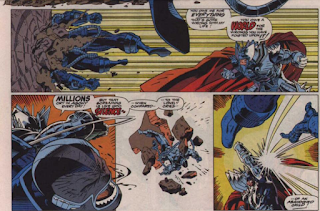 Stryfe also declares Apocalypse to be the destroyer of his past and future, another reference to both the Apocalypse who infected Nathan Christopher and the one who ruled the world in which Stryfe grew up.

When Stryfe loses his helmet, Apocalypse is confused, as he's familiar with Cable, but apparently didn't know that Stryfe shared Cable's face. In general, Apocalypse's confusion over who Stryfe is (he knows who he is, but not his whole deal) and why Stryfe hates him so much makes their fight extra fun; Because Apocalypse isn't a time traveler (just long-lived) and Stryfe is, Stryfe is essentially attacking him both for things he's done and will do, which is a fun dynamic. 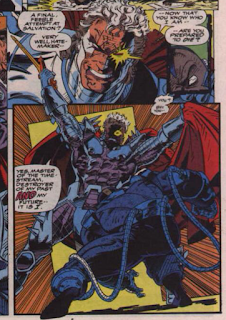 In addition to all the "Stryfe is Nathan Christopher" hints, this issue introduces a fair amount of backstory on Stryfe, confirming he is from the future and declaring 1983 to be the year at which he first arrived in the past (though of course, given Marvel's sliding timeline, that specific year is no longer accurate.

A bunch of stuff that Nicieza will explore in Cable's solo series is introduced here as well, including the terms "New Caananites" for Future Apocalypse forces, and "Clan Chosen" for the group with which Cable fought (this is also the issue which establishes that Apocalypse is active in the far future, and that Cable specifically fights against him there). 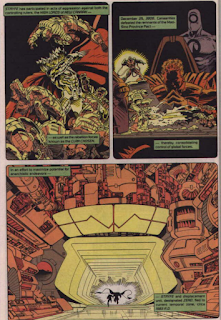 Cable also says that Stryfe came back in time to prevent the ascension of the next high lord, while Cable came back to control the ascension, a slight revision to Cable's motivations by Nicieza which sort of bridges the gap between Liefeld's X-Ternals nonsense and the later retcons involving Cable's destiny as the archenemy of Apocalypse, but most of these specifics ultimately get swept under the rug. 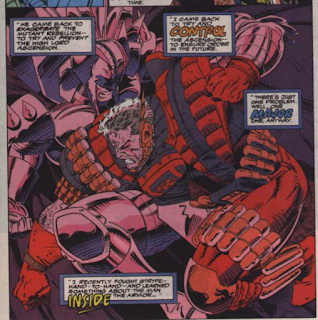 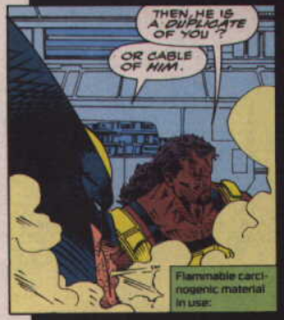 Mr. Sinister is on this issue's trading card. 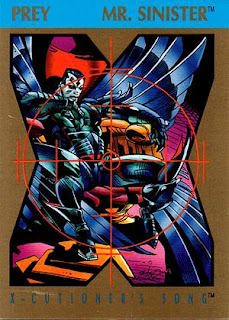 A Work in Progress
Stryfe stabs Apocalypse with the sword bearing Apocalypse's likeness which Stryfe retrieved in the Cable limited series. 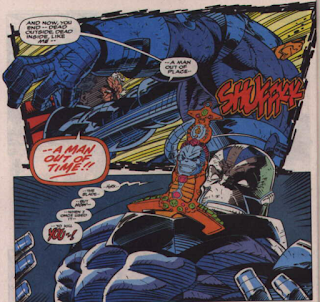 Stryfe rightly points out that by defeating Apocalypse he has shown himself to be stronger than Apocalypse, and thus by Apocalypse's own tenets, the Dark Riders should serve him instead, an argument they accept. 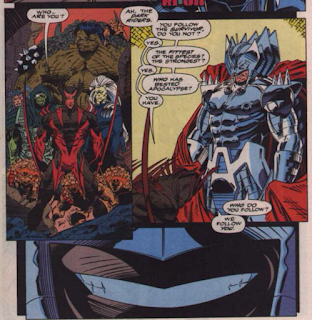 Both Wolverine & Bishop raise an eyebrow upon learning Cable refers to his sentient computer as "Professor".

Stevie Hunter is still hanging around, working triage for the injured X-Men, though she is erroneously colored white.

The rest of X-Force is now being held in individual cells, rather than one large one as seen in Uncanny X-Men #295. Both Sunspot & Rictor rightly point out that they only joined X-Force a few weeks ago.

Madrox tells Siryn about the rogue duplicate which participated in Fallen Angels and had the relationship with Siryn, the crossover's second reference to that series, a contributing factor to young me thinking that series was a much bigger deal than it ever was. 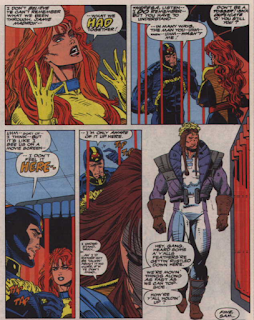 Polaris' broken jaw is referenced, even though Capullo fails to draw the brace.


The Grim 'n' Gritty 90s
A running gag throughout this issue involves Wolverine's efforts to sidestep the anti-smoking technology on Graymalkin. 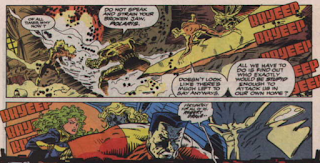 Artistic Achievements
I've always really liked the sequence where Archangel flings his feathers at Apocalypse in one panel, followed by the next panel where Apocalypse blocks them with his forearm. 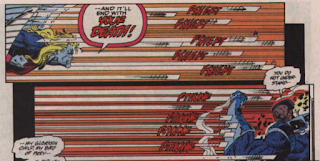 Austin's Analysis
As the second act of the crossover comes to a close, Stryfe gets, effectively, a spotlight issue. With the Horsemen, Mr. Sinister and the Mutant Liberation Front more or less off the board at this point, and with Apocalypse appearing, per the issue's cliffhanger ending, to ally himself with the X-Men, Stryfe is the last villain standing, and he will come to dominate the final act of the story as the X-teams finally move against him. So it makes sense to give him the focus and fill in the readers on some of his backstory (even while continuing to tease new mysteries, as well as the "connection to Cyclops, Jean Grey & Cable" mystery that hangs over this whole story) via his fight with Apocalypse and Cable's debriefing of Wolverine & Bishop. Kudos, also, to having Stryfe's spotlight in an issue of X-Force; it's doubtful many people were really reading just this series at this point in time, but if they were, at least the origin, such as it is, for who is essentially X-Force's main antagonist, came in X-Force's book.