The Walking Dead 7x02: The Well 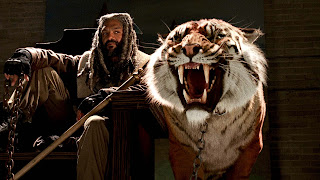 Sorry, it's been a while. I have my excuses. Not good ones, though.

I got a little busy which delayed this post and then a funny thing happened. The US election. And...that was rough.

It's no secret that we here at Gentlemen of Leisure are no fans of Donald Trump. So after the election I was really bummed. The last thing I felt like watching was a dark, soulless, dystopian view of the future. I get enough of that following the news. So, my DVR kept filling up with episodes of the The Walking Dead; taunting me.

I've railed against the ethos of this show before. It suggests that the majority of people are heartless monsters just waiting to steal, rape and kill the first chance they get. And, frankly, that's the exact same worldview Trump was promoting. That fact was not lost on the Trump campaign.

They say art imitates life. What people can forget is that art also influences life. I reject The Walking Dead's view of people as much as I reject Trump's view of America. I just know that not everyone does the same. The more and more people believe that humans are inherently selfish and evil and that the only way to stand is on the backs of other people then the worse and worse the policies they'll endorse will become. Going forward, I know the more I watch The Walking Dead get darker and darker the less I'm going to view its ethos as simply misguided but, instead, dangerously influential.

So, why am I boring you people with political talk instead of talking about the episode? Because, frankly, I don't have much to say about the episode itself. Which isn't a bad thing. I actually kind of liked this episode. Which, considering it was Carol-centric, is really saying something!

I was going to knock a village of people run by a faux-king talking in community theater Renaissance speak with a pet tiger as too cartoony but they actually explained it well. And it added to the world building because it turns out this community is under the thumb of Negan too.

A season of disparate communities all banding together to topple an oppressive dictator/extortionist? I could get behind that. Of course, there are many ways to screw the formula up (falling too in love with Negan, making Alexandria be the only “smart” community, etc.) but it could be fun. Or this season could drown in it's own dark, depressing, nihilism. Let's hope in this case that art doesn't imitate life.

Other Thoughts:
The "Previously On" didn't show that fact that Morgan killed somebody. I guess it's not terrible important....

I feel like Rick had plenty of opportunities to kill Negan. He should've taken one.

When Morgan hesitated to say the name of the leader of this community, I thought it might be "Negan."

I was hoping King Ezekiel was going to call BS on Carol's "naive house wife" act right away.

Why do these people trust Morgan so quickly?

King Ezekiel made a grand speech. I figured he was a goner.

I liked King Ezekiel's response to why he cares about people. "Because it makes me feel good."

The narrative of Carol (or anybody in Rick's crew) dismissing communities they come across as naive, out-of-touch or doomed to fail is quickly losing potency. That's because the longer the show goes the more this narrative doesn't make sense. The longer the show goes, the longer time passes in the world of The Walking Dead. The longer time passes the more proof of a community's viability. So, make fun of this village all you want, Carol, but keep in mind it has lasted a lot longer than any community you've been a part of.
Newer Post Older Post Home
Posted by Dr. Bitz at 12:28 AM