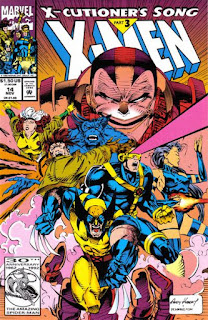 "Fingers on the Triggers"
November 1992

In a Nutshell
Apocalypse awakens as the X-Men hunt down X-Force.

Plot
As Beast & Moira MacTaggert work to treat the techno-organic virus attacking Xavier, Storm & Havok split the combined X-Men & X-Factor into two teams: one to hunt down X-Force in the hopes of finding Cable, the other to find Apocalypse's Horsemen, in the hopes of rescuing Cyclops & Jean Grey, while Bishop opts to stay behind and guard Xavier. Meanwhile, Mr. Sinister trades the captive Cyclops & Jean Grey to the MLF in exchange for a mysterious canister, while X-Force's ship crashes after fleeing their encounter with X-Factor, prompting them to call for the rest of their team. In Egypt, Apocalypse is awoken by the Dark Riders, who tell him his Horsemen have kidnapped Cyclops & Jean Grey in his name. In space. Cable returns from the future to Graymalkin, where he learns someone impersonating him has shot Xavier. At the X-Mansion, Mr. Sinister suddenly appears, telling him he's come to bury Xavier, while in West Texas, the X-Men Blue team & X-Factor track down X-Force's crashed vehicle, only to find the entire group waiting for them, as Cannonball declares that while they don't want a fight, X-Force is more than ready to give them one.

Firsts and Other Notables
This issue marks the debut of Andy Kubert as the book's new regular artist, fresh off his breakthrough stint as penciler of Ghost Rider (a high profile book at the time, eclipsed, arguably, only by the X-books). He will remain as the book's main artist, along with a fairly regular assortment of fill-in artists, until issue #59, outlasting Fabian Nicieza on the series. His work here (and in the rest of the story) is fairly rough, relative even to his later work on the book, either a result of him still being a young and raw artist at this point, or just the result of a time crunch, given the turnaround time for this crossover relative to the Image Exodus.

After Mr. Sinister in the previous chapter, this introduces Apocalypse to the story, rounding out the trip of "main" villains to be featured. This is actually the first time we've seen Apocalypse since his apparent death in X-Factor #68, something that never really dawned on me as a kid (kind of like how I was subconsciously unaware of the gap in Mr. Sinister appearances between X-Factor #39 and #75), since Apocalypse was already considered a staple of the X-Men rogues gallery, showing up on trading cards, as action figures, and whanot. 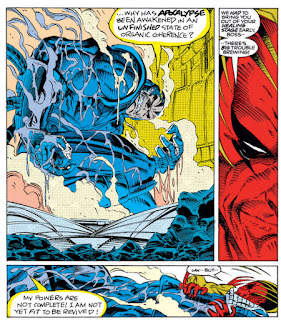 This issue also introduces the idea that Apocalypse's resurrections are part of routine process in which he regenerates following an apparent death/defeat; here, he complains of being awoken too early, before he's finished cooking, so to speak, and is weaker than normal as a result. This idea will be developed further in future stories, going so far as to suggest that Apocalypse is constantly looking for stronger mutants to serve as his "host" body, an idea later used for his cinematic counterpart.

Apocalypse's connection to ancient Egypt, briefly referenced during "Fall of the Mutants", is also reinforced here, as he is revived inside a pyramid in that country. This will also become an important of his character moving forward.

Appropriately enough, Apocalypse is featured on this issue's trading card. 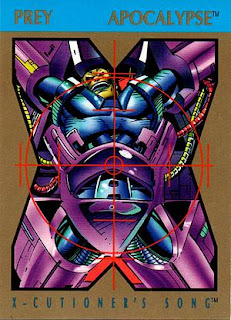 Along with Apocalypse, his latest group of henchmen from his previous X-Factor story, the Riders of the Storm, return this issue, being the ones responsible for resurrecting him. Here, they are called the much-less-of-a-mouthful "Dark Riders", the name that will stick for later appearances and by which I've always known them.

Cable returns to the present day here, coming back from the future timeline where he took Kane in Cable #2, and immediately learns that someone tried to kill Xavier while impersonating him. Again, it hasn't been explicitly stated yet that was Stryfe, but this issue puts that idea out there for anyone not already assuming as much. 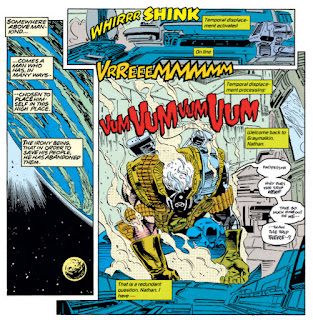 Cyclops and Jean Grey trade hands this issue, as Mr. Sinister trades them to Stryfe in exchange for a mysterious canister. Said canister will later turn out to contain the Legacy Virus, but before then, we'll learn that Mr. Sinister believes he's getting Summers generic material in the canister. Which, of course, introduces this story's biggest plot hole: why Mr. Sinister trade Scott SUMMERS for Summer genetic material. There's a number of possible No-Prize-y explanations (like Sinister wanting future Summers material, or knowing Stryfe is related to Cyclops and Madelyne Pryor so he specific wants his DNA to see how his creation turned out, or the material being more comprehensive than just having Cyclops' DNA, which Sinister has had access to for years), but the story never really addresses this, beyond Sinister's vague claims that he now possesses the future (which could be read as his wanting Summer DNA further down the lineage from Cyclops'). 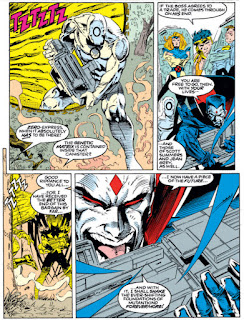 With Xavier back at the mansion, Moira is brought in to help Beast treat the virus (here via screen, but she'll physically come to the mansion soon). Nicieza does one of things I always appreciate happening in a shared universe, offering up an in-universe explanation for why other characters aren't involved in a given story with a scope that should affect them. Here, Val Cooper asks about bringing in Hank Pym or Reed Richards to help, to which it's suggested that there's nothing they can do that Beast & Moira can't (which is, perhaps, short-sighted - four genius heads are better than two, right? - but I appreciate the effort). 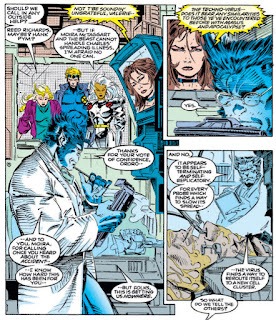 Beast has for a long time been portrayed as intelligent and general science-y, but beginning in this story with his role as one of the people trying to heal Xavier, he will be portrayed more and more often across both X-Men titles in a medical role, especially as the Legacy Virus storyline ramps up and he becomes one of the chief figures trying to cure it.

Remember Stevie Hunter? Last seen being menaced by a Shadow King-controlled Colossus in Uncanny X-Men #279, she pops up here somewhat randomly, as a hostage of Mr. Sinister (along with Val Cooper) at the very end of the issue, though she'll stick around for a few more chapters as well. 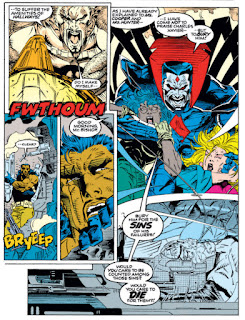 The cover of this issue has been used as the cover of several collected editions of this story.

A Work in Progress
On the opening page, the recap narration declares that Cyclops & Jean Grey were captured by the Four Horsemen of Apocalypse. There were, in fact, only three of them.

The X-Men's past experiences with techno-organic viruses, both of the Magus variety and the one Apocalypse used to infected Cyclop's son, are referenced.

Similarly, Beast volunteers to join the Gold team in pursuit of Apocalypse, because he, Iceman and Archangel have the most experience dealing with him (none of the other X-Men have met him yet), while Quicksilver is put on that team because of his connections to the Inhumans, given Apocalypse was last seen on the moon. 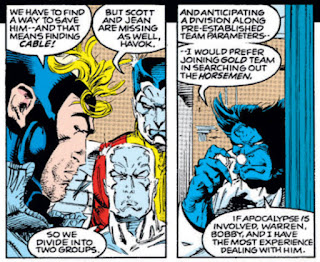 Bishop volunteers to remain behind and guard Xavier, which apparently amounts to him standing on the lawn with his guns drawn, randomly twisting around to point the guns at a new spot, which is absolutely hilarious. 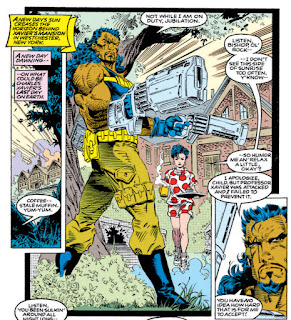 Reaper of the MLF's disdain for high temperatures is referenced again.

X-Force's stolen SHIELD IPAC vehicle finally craps out on them, ending its brief run as their mode of transportation. 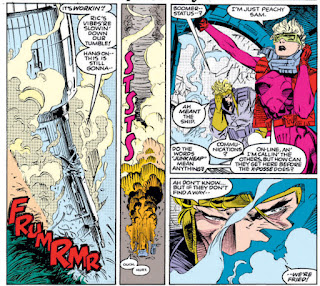 The X-Men/X-Force contingent is able to use Cerebro to track down X-Force, something they hadn't been able to do before; Rogue says Xavier theorized Cable was somehow able to block it previously. 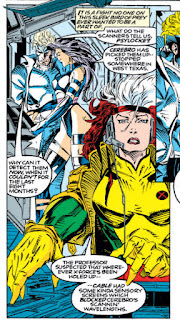 On their way to arrest X-Force, the combined X-Factor/X-Men Blue team debate the merits of X-Force's philosophy and the general idea of the ends justifying the means. 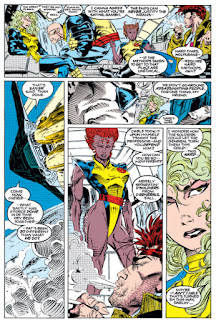 Upon learning about the assassination attempt on Xavier, Cable says it never happened, another hint towards Stryfe's time travel nature. 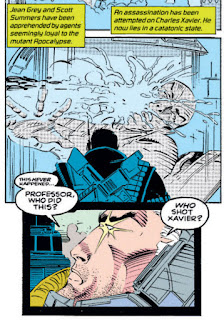 The X-Men/X-Factor contingent recognizes Sunspot's energy type, but is surprised to be hit by it from afar, as he only acquired that ability as of X-Force #15.

It's in the Mail
Letters in this issue ask the infamous "why doesn't Cyclops wear ruby quartz contacts?" question that seemed to pop a lot around this time, a response to another questions mentions that Excalibur won't be participating in "X-Cutioner's Song" but all the other X-books will (Wolverine doesn't as well), and both the X-Men movie and upcoming animated series are mentioned, with the latter actually well on its way at this point while the former is still nearly a decade out.

Austin's Analysis
The larger plot of the story hums along, with Xavier, dying from a techno-organic virus, ensconced in the mansion (where he'll remain for the rest of the story), the third major villain of the story introduced (Apocalypse), Cable returned to the present just in time to learn he's accused of trying to kill Xavier, and the gathered X-people splitting off to run down leads, culminating in a full-fledged showndown with X-Force (following the brief X-Factor/X-Force scuffle in the previous chapter). But like Lobdell in chapter one, Nicieza surrounds all these plot machinations with acknowledgements of the the franchise's history and little bits of characterization, things like Beast referencing the fact that, above all else, Apocalypse is the primary foe of the original X-Factor (even if all those members are now, technically, X-Men once again), or Bishop taking it personally for failing to protect Xavier, or just something little like Reaper's hatred of the heat (a sentiment he and I share, and which makes him, outside of Tempo, arguably the most nuanced of any of the MLF). Heck, Nicieza randomly drops Stevie Hunter into the mix; she doesn't do much, but it's nice to know she's still around.

Or take the extended discussion aboard the Blackbird regarding X-Force's methods and whether the ends justify the means, and how it helps define the characters involved. Sure, for longtime readers, the idea that Gambit or Wolverine can justify killing but Wolfsbane is against it is hardly groundbreaking, but in the span of a few panels, any new readers brought to the book thanks to the marketing hype have at least a rudimentary idea of who some of these characters are, as people, beyond just their costumes and powers and roles within the plot. Stuff like that, making the room for moments of characterization, however basic, and acknowledging the shared history of the books, to underscore the sense that what's happening now matters because past events are still having an impact on the characters, is important to making a huge crossover like this feel more like a story and less like the marketing gimmick it ultimately is, that there's more to this than a bunch of interchangeable characters running around punching things.

Next Issue
Tomorrow, X-Force battles the X-Men in X-Force #16. Friday, the X-Men team-up with Excalibur in Excalibur #57. Next week, Uncanny X-Men #295.