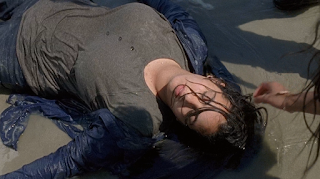 This season of the Walking Dead has taken the strategy of focusing (for the most part) on one location a week. We had Rick and crew in the woods with Negan, Morgan and Carol at the Kingdom, Daryl at the Savior's, we checked in on Alexandria, visited Maggie and Sasha at Hilltop and now we see Tara at some all women village.

This could be a fine approach. The Walking dead is really trying to expand its universe and splitting up their cast and focusing on one location an episode seems like a good way to do that. The problem is, most of their characters are boring.

Not all characters are boring. Everyone loves Daryl. I'm not the biggest Rick fan but he's had the biggest character development of anyone in the series so he can at least be interesting at times. We know how I feel about Carol but I have to admit that there are plenty of people who are interested in watching her. On the flip side, I personally like Morgan while most do not. But beyond those four? Which characters do you actually like? That you actually want to spend more time with?

I'm not saying I don't like Sasha or Maggie or Rosita. I'm just neutral to them. Michonne is cool (because, sword) but I know so little about her. (On a side note, that's probably why the Rick/Michonne relationship doesn't seem to work.)

My point is, when we get to an episode focused on Tara I have two reactions. Firstly, where did we leave her off last season?. Secondly, should I be excited? I know so little about her. She's a lesbian and...? In fact, I had forgotten she still didn't know about Denise's death.

Sure, it's important to introduce the village whose men were all killed off by the Saviors. But if you can mix that in with characters we already care more about it makes the episode more watchable. We'll accept an episode easier if it focuses on characters we aren't attached to as long as we also see our favorite characters. If done right, the scenes with less-liked characters show character moments that make us like them better.

Which brings us to our second problem of this episode. If you're going to focus an entire episode on Tara, I should really feel like I know Tara by the end of it. This episode needed to illuminate us on who Tara is. How she thinks and feels. What her past was like. But we didn't get any of that. All I really learned about her is she knows jack about fishing boats.

All this episode did was introduce us to is a xenophobic women's village. That could've been accomplished in roughly one scene. That one scene would've been fine. After that they could bounce to other locations that have characters we care about. Which would be good since, apparently, this show has no interest in getting us to care about Tara.

Other Thoughts:
A group of people that kills anyone they don't recognize? They'll fit right in.

How long was Tara unconscious? Anything more than a few minutes and she risks serious brain damage.

At the risk of sounding like an MRA, having a xenophobic, all-female village seems to put a cap on the community's life expectancy, right?

Sometimes I think TV and movies underestimate how dangerous it is to jump off a bridge into water.

My, what a coincidence that the only zombie on the bridge that isn't covered in gray dust is the one that looks like Heath.

So, Tara has learned that the women were right about how dangerous Negan is. I must admit that I'm intrigued what Tara does now.

I'm always wary of scenes of people washing up on shore unconscious. How can you survive that? You're unconscious, in water. No way you don't drown, right?
Newer Post Older Post Home
Posted by Dr. Bitz at 1:39 AM