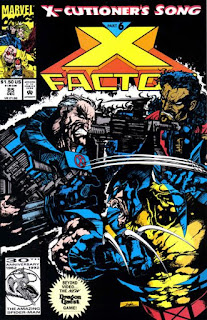 Plot
At Department K, Wolverine & Bishop attack Cable, while in Arkansas, Cannonball leads X-Factor & the X-Men to a town that turns out to contain a hidden Mutant Liberation Front base. In Switzerland, Apocalypse enters Cable's safehouse, and is stunned to recognize Cable's tech as being similar to his own. In Arkansas, X-Factor & the X-Men attack the MLF. Elsewhere, Stryfe tortures Cyclops, making him believe he's responsible for the deaths of Jean and a group of children. In Canada, Cable is able to convince Wolverine he didn't shoot Xavier, at least long enough to stop their fight and hear Cable out. In New York, the X-Patriots knock out one of Madrox' dupes, left behind to guard them, and leave the hospital. In Arkansas, Wildchild knocks out Gambit, who is turn knocked out by Quicksilver. But Reaper sneaks up on Quicksilver, cutting his leg, leaving both Quicksilver & Gambit at his mercy.

Firsts and Other Notables
This is one of the more infamous chapters of this crossover, as the central plotline involves a three-way fight between 90s paragons Cable, Bishop & Wolverine, aka three characters who aren't regulars in X-Factor, which is apparently the straw that broke the camel's back for Peter David, leading him to leave the series shortly after the crossover ended.

Amidst all the crossover business and teeth-clenching 90s fights, David does manage to sneak in a one-page advancement of his (yawn) X-Patriots plot, as the group overpowers a Madrox dupe left to keep an eye on them and leaves the hospital where the injured Taylor was being treated. 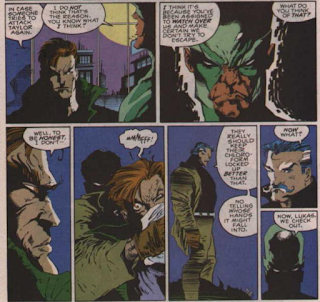 Kamikaze, the MLF member who is neither Sumo nor Samurai, dies this issue; he is unintentionally decapitated by Archangel. 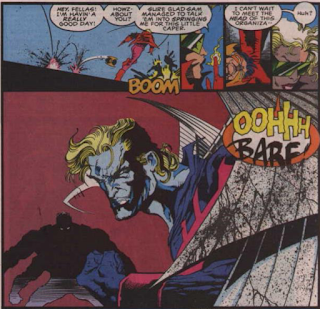 After torturing Cyclops, Stryfe rhetorically asks if Cyclops even cares if he hurts the ones he loves, to which Stryfe answers that he doubts it, another "Stryfe is Nathan Christopher" clue. 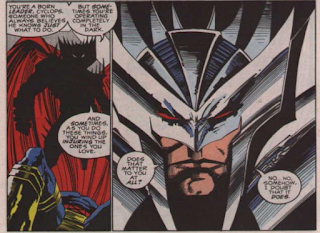 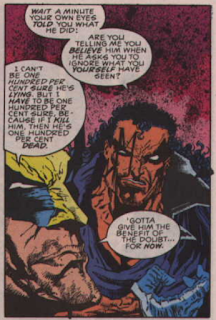 A Work in Progress
Apocalypse pops up in Cable's Swiss safe house, and is surprised to find his technology is similar to that of Apocalypse, who says only the original X-Factor has had access to it (aside from himself). This leads Apocalypse to ponder if, perhaps, Cable is someone who also had access to that tech through no choice of his own, another nod to Cable's eventual origin. 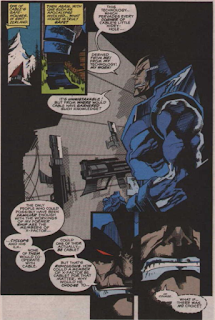 This issue reveals that Boom-Boom has been released from X-Force jail, along with Cannonball, to help fight the MLF. 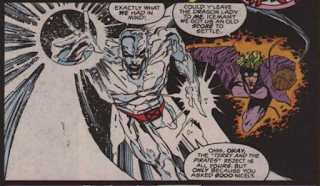 52 Card Pick-Up
Gambit declares that a MLF victory is "not in the cards", moments before taking out Tempo with an exploding card. 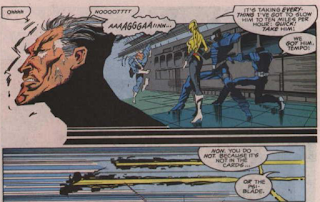 Artistic Achievements
Jae Lee's art is heavy on the pinups, short on the storytelling, but I've always really liked this panel of Havok, Storm, and Cannonball all lined up. 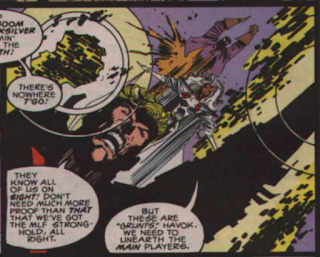 Young Love
Dragoness' flirtation with Cannonball, from their last encounter in New Mutants #94, is referenced.

Austin's Analysis
I love this issue. It's so gloriously over-the-top 90s, with Jae Lee's pinup-posed figures of Cable, Bishop & Wolverine gritting their teeth and blasting enormous guns at each other. In small doses, this kind of aesthetic can be fun (the problem with the 90s is that the popularity of this aesthetic was so large that it overwhelmed everything and showed up everywhere, to the point that characters who had no business doing so were constantly shooting enormous guns through gritted teeth at each other), and as an explosion of the simmering rage the X-Men have felt through this whole story towards Cable for (in their eyes) trying to kill Professor X, it works remarkably well: it's big and loud and dark and messy, but so is their anger.

This is also reportedly the issue that led Peter David to leave the series as, after having to interrupt his X-Patriots storyline to participate in "X-Cutioner's Song", here he has to hand over the main plot of this issue to a brawl featuring three characters who aren't regularly a part of his series. And while I can certainly empathize with David, at the same time, I appreciate the consistency of this crossover, in that each chapter more or less moves the story forward to the same degree, without large chunks of a given chapter detoured to focus on plotlines not involved in the crossover which are more germane to the specific series. There's always going to be an element of serving other masters when writing in any shared universe, and the crossover storyline is that idea in microcosm.

Could the order of events have been fudged, such that the Bishop/Cable/Wolverine fight was more the focus of the previous chapter (with Bishop being a featured character in Uncanny) and the X-teams briefing led by Val Cooper (at this point principally an X-Factor character) shifted here? Possibly. At the same time, I'm sure someone felt the brawl was more suited to Jae Lee's skills than a lot of talking scenes. Could X-Factor have been excluded from the crossover entirely? Of course. But their role as the government-sponsored team more or less requires their involvement in a story dealing with the renegade X-Force, and the series by now has a long tradition of particpating in this linewide stories. At the end of the day, it's a good thing that this series firmly participates in this story, and doesn't edge the concerns of the overall story aside in favor of its specific plots or characters. It's just unfortunate that by doing so, it cost us Peter David's long-term involvement with this iteration of the book.

Next Issue
Tomorrow, more walks down memory lane in Wolverine #64. Next week, the second act of "X-Cutioner's Song" concludes in X-Men #15 and X-Force #17.