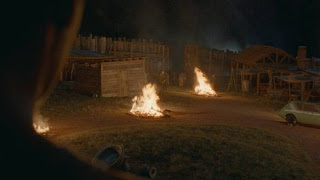 I know when I watch a show, especially one that flouts all laws of physics like The Walking Dead does, that I have to turn my brain off. But sometimes there are some things I can't turn my brain off for. (Like, last season when Jesus magically teleports.)

This time it's when the Saviors left a running car in the middle of Hilltop with a radio blasting to attract zombies. I mean, what? Really? I just couldn't buy it.

So...how did this car get there? Did someone drive it into Hilltop, turn on the speakers, leave the vehicle, lock the door and then light the fires? If so, does Hilltop not have a gate? If they do, why was it open? If they don't, shouldn't there be a lookout? Heck, even if they do have a gate, don't they have a look out?

What is this car running on, anyway? Was it running on gas or just the battery? How long could the battery last? Where do they get gas for all these vehicles anyway? I get that gas is (relatively speaking) plentiful in our universe, but I wonder how long gas would last in the zombie apocalypse. I would think whatever infrastructure keeps gas station pumps running is long gone. And new gas isn't getting refined from crude oil, I can tell you that. Maybe they get the gas from siphoning? How long could that last? Has the Gasoline expired? I guess this could all be more easily answered if I knew how much time is supposed to have passed.

All this talk of gas now makes me wonder where they get all this electricity from. Generators? Gas generators? I know Alexandria gets power from solar panels (good thing they apparently have people how can maintain that) but what about Hilltop? What do they use? What other generator technology exists that these people could maintain and/or develop?

I get it, I probably shouldn't think about these things. And given the right set of people I suspect Hilltop, the Saviors' place and Alexandria are all plausible setups in the post apocalypse. But when you have a car magically teleport into Hilltop with no one there to see it happen and sound an alarm? It's too much and it makes me think about all the other implausible BS on this show.

Other than contemplating all the implausibilities on The Walking Dead, my only takeaways from this episode are that Maggie is alive (no big shock), the Hilltop mayor is still a dick, the Saviors are dicks and Carl is going to get himself killed.

Other Thoughts:
Speaking of implausibilities, the roller skates Enid and Carl find just happen to fit both of them perfectly?

Maggie is looking exceptionally skinny. Is that intentional?

So Hilltop has never met Negan in person?

We've been skipping from location to location this season. That's fine but the timeline can be a bit confusing.

I would think a working vehicle would be a hot commodity in the zombie apocalypse but the Saviors don't act that way. They use up vehicles like they're going out of style!

Sometimes I think the Saviors take too much from the communities they're extorting. If you deprive them too much they'll either revolt (which the Saviors could probably quell but at the cost of the people you rely on to gather resources) or you take so much the community falls a part (which, again, means no more resources).
Newer Post Older Post Home
Posted by Dr. Bitz at 6:01 PM