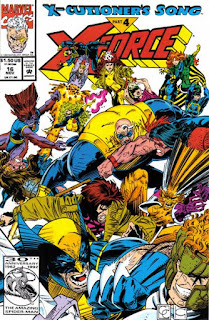 In a Nutshell
X-Force battles X-Factor & and the X-Men.

Plot
In Texas, X-Force engages the combined X-Factor/X-Men Blue team. They hold their own for awhile, but are eventually overwhelmed, and Cannonball orders them to retreat and regroup, as Wolverine sets off in pursuit. Meanwhile, the Gold team & Quicksilver arrive at a warehouse where Cerebro has located Caliban's energy signature. Inside, they are attacked by Caliban & Famine, and in the process of defeating them, trigger a message from Mr. Sinister, which says that Apocalypse is both the cause of their current situation, and a means to an end. At the X-Mansion, Sinister himself quickly overpowers Bishop, and gives Val Cooper the name of the true culprit behind the attack on Xavier. Meanwhile, Cable prepares to find Stryfe, while the captive Cyclops & Jean Grey are brought before the villain. Back in Texas, Wolverine catches up to X-Force, with the rest of his team close behind. With X-Force surrounded and overpowered, Wolfsbane begs Cannonball to stand down, and he reluctantly does, after which X-Force is taken into custody.

Firsts and Other Notables
This issue ends with X-Force defeated and in the custody of the X-Men/X-Factor, effectively ending their existence as the outlaw X-team (at least amongst the other X-teams). Going forward, they'll remain on the edges of lawfulness (even relative to the X-Men), but will do so with more implicit (and at times, explicit) support from Professor X, leading up to a time in which X-Force will actually operate out of the X-mansion, right alongside the X-Men, post-"Age of Apocalypse". 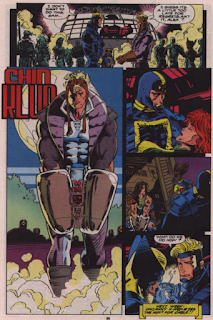 The final main villain of this story is formally introduced in this issue as Stryfe appears in it in his full Stryfe-y regalia for the first time, while Mr. Sinister makes the heroes aware that it was Stryfe, not Cable, whom attempted to kill Xavier. 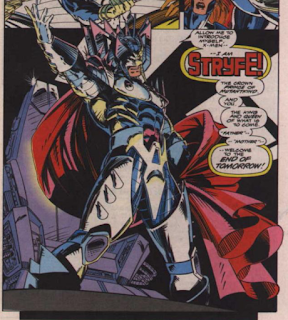 In perhaps the earliest bit of foreshadowing of the later Rictor/Shatterstar relationship, Rictor and Wolfsbane are reluctant to fight one another, until Shatterstar is injured, prompting Rictor to join the fray. Likely just a coincidence at the time (it could have been any one of his teammates taking a hit that motivated Rictor), it nevertheless reads as foreshadowing in hindsight. 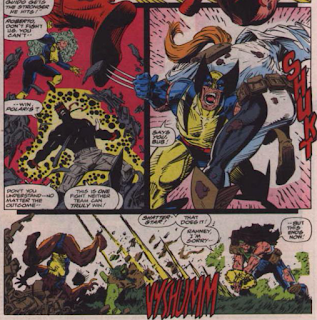 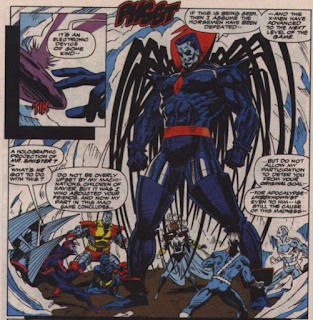 Another more overt hint comes when Stryfe refers to the captive Cyclops & Jean Grey as "father and mother".

Cable receives the trading card treatment for this issue. 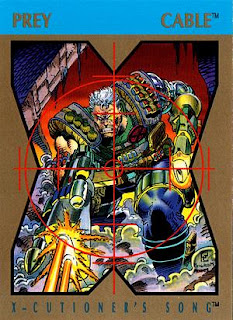 A Work in Progress
Shatterstar refers to Wolverine as "Lord Wolverine". 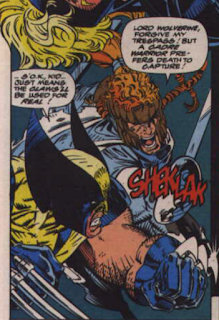 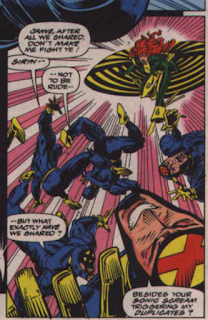 Icemand & Storm combine their powers, with Storm generating moisture and Iceman then freezing it, the sort of thing we really haven't seen often enough during the Blue/Gold era (ie teammates who haven't shared a lot of time together on-panel interacting and using their powers in tandem).

For whatever reason, War is not amongst the Horsemen the X-Men fight this issue.

The gaping hole in Archangel's wing has healed since X-Factor #84.

Cable returns to his Swiss safe house, seen in his limited series, to gear up.

There's another one of those unspoken creepy moments that pop up in superhero comics fairly regularly here, as Cyclops and Jean Grey, who were captured wearing civilian clothes, are presented to Stryfe in their costumes. So, did Sinister and/or the MLF undress and dress them?

The Grim 'n' Gritty 90s
Bishop blasts a hole in Mr. Sinister's head, to no avail, a la the T-1000 from Terminator 2, and this really marks the beginning of Sinister's depiction as having a malleable, largely invulnerable body.

Cable's gear as he sets out after Stryfe is laughably 90s. 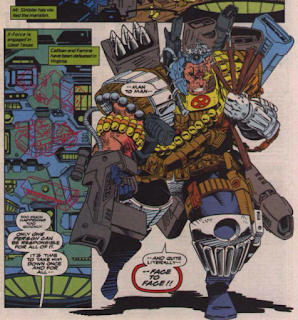 Austin's Analysis
As the first act of "X-Cutioner's Song" comes to a close, two important things happen. First, Stryfe makes his full first appearance in the story (obviously, we'll soon find out he was there in chapter one shooting Xavier, but this represents his first appearance in full regalia), rounding out the triad of "major" villains for this story, with Stryfe eventually revealed as the central villain of the whole thing. Secondly, and of greater significance, this issue gives us a full blown X-Force vs. X-Factor/X-Men melee, with X-Force's eventual defeat more or less marking the official end of the first chapter of their existence: from this point forward, while the team will remain "extreme" in a relative (and vague) sense compared to the X-Men, the sort of over-the-top, teeth-gritting, flailingly-intense nonsense that characterized Liefeld's handful of issues, something from which Nicieza was already moving the series away prior to this issue, is more or less put to rest.

"X-Cutioner's Song" is, ultimately, an X-Force story: the other two teams get drawn in and play their part, but this is a story chiefly about the relationship between Cable & Stryfe, and between X-Force and the rest of the X-Men. The former has yet to unfold, but as act one closes, the latter is beginning to take shape, as X-Force, despite a valiant effort, falls short in the face of the X-Men and X-Factor. It's important that this happens in their own book, so as to make their defeat seem more legitimate (and not just a case of guest stars falling to the host title's characters), and Nicieza smartly both keeps the conflict from becoming a full-on route, and also establishing (over the previous few issues) that X-Force is hardly at their best; they've had one lucky escape after another, and now, their luck has simply run out. Thus, this isn't just the end of the first act of "X-Cutioner's Song", but really, the X-Force story that's been unfolding more or less since Liefeld left the series.

And with its end, X-Force will be allowed, subtly at first but eventually more overtly, to integrate more closely with the rest of the X-books. Which is another example of the larger changes wrought on the franchise by this story, the slight repudiation of the previous post-relaunch "Image" era of the central four books, which found most of them off doing their own thing, consciously ignoring much of the immediate past, each shepherded by a single artistic vision. "X-Cutioner's Song" doesn't succeed in all its objectives, but it does allow the series to interact more with their pasts, and with each other. A lot of the groundwork for that later achievement is laid here, with X-Force being taken off the board as the story's first act concludes.

Next Issue
Tomorrow, the X-Men (finally) guest star in Excalibur #57. Next week, the second act of "X-Cutioner's Song" begins in Uncanny X-Men #295 and X-Factor #85.