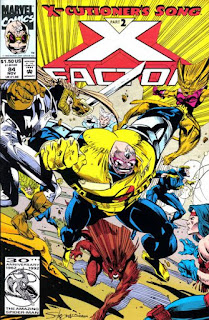 In a Nutshell
X-Factor battles X-Force

Plot
As a contingent of X-Force prepares to head to New York to find Cable, Xavier is rushed to the hospital. As various members of X-Factor & the X-Men gather, Havok sends Wolfsbane & Strong Guy out to check the scene of the crime themselves. Shortly thereafter, X-Force arrives at the same spot. As Strong Guy calls in to Havok, Wolfsbane is reunited with her old New Mutants teammates. They try to convince her to join them, but she refuses, citing once again her feelings for Havok. With Feral finding no trace of Cable's scent, they prepare to leave, but Strong Guy attempts to stop them, and a fight breaks out. It is quickly joined by the rest of X-Factor and, overpowered, Cannonball orders X-Force to retreat. As they do, Havok blasts their ship, damaging it in order to leave a trail, in the hopes that X-Force will lead them to Cable. Meanwhile, Apocalypse's Horsemen deliver the captive Cyclops & Jean Grey to their master who, once they're gone, reveals himself to be Mr. Sinister masquerading as Apocalypse. Back at the hospital, the doctors announce that while they've stabilized Xavier, they've discovered he's been infected with something else: a techno-organic virus.

Firsts and Other Notables
This issue advances the plot of "X-Cutioner's Song" in two significant ways. First, it introduces Mr. Sinister to the narrative, revealing that he is behind the kidnapping of Cyclops and Jean Grey, having posed as Apocalypse to get the Horsemen to capture them. One of the things the X-office wanted to do with this story is feature the X-Men's biggest (living/current) villains in one story; here, we get the second one (after Stryfe in chapter one, though we don't *know* that was Stryfe yet), representing both the X-Men (as Sinister fought both the X-Men and the original X-Factor during "Inferno") and the All New X-Factor (as he most recently appeared battling that team). 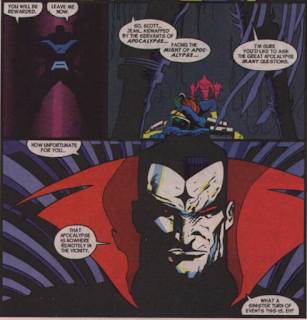 Secondly, the end of the issue reveals that not only was Xavier shot, but he was also infected with a techno-organic virus (presumably via what projectile with which he was shot). This will sideline Xavier for the effective duration of the story, and it also provides a hint towards who the true villain of the story is, and hints at that villain's true identity (since at this point the story was still being written as though Stryfe was Cyclop's son, who was also infected with a techno-organic virus and sent into the future where, it will eventually be confirmed, he became Cable/Stryfe). 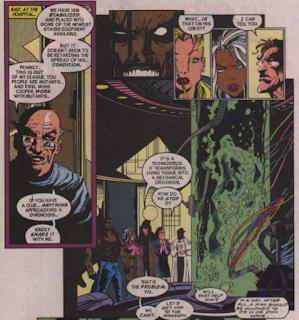 Jae Lee joins the series as its new regular artist, at least for the duration of "X-Cutioner's Song". I don't know, but have always assumed, that he was brought on just for these issues, a way to bridge the gap between Larry Stroman & Joe Quesada while giving the series a consistent look for the crossover. Of course, his hyper-stylized and darker work doesn't really fit the more light-hearted tone of this series, but since the next two issues of this series don't really feature the regular X-Factor characters much at all, that may be a moot criticism to make. Certainly, I'm glad Lee is drawing these issues instead of Mark Pacella.

This issue features a mini New Mutants reunion, as Cannonball, Wolfsbane, Rictor and Boom-Boom are all together for the first time since "X-Tinction Agenda". 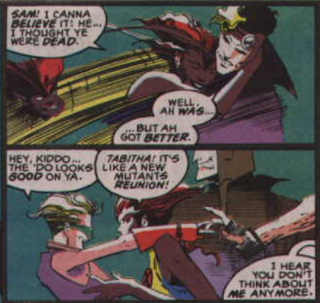 This issue's polybagged-packed trading card is of Caliban. 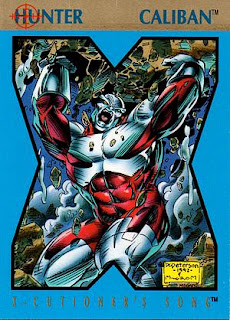 Collection Recollection
For whatever reason, I managed to miss this issue back in the day when I was buying this story off the shelves. So I ended up with all the chapters but this one, and it would take a few years before I could track it down as a back issue. As a result, while I've read this entire story numerous times, this remains the chapter of the story I've read the least.

A Work in Progress
Val, at least, has some kind of official X-Factor badge.

We're reminded that the public at large isn't aware that Professor X is a mutant, as Rahne freaks out and there's concern it'll out him. 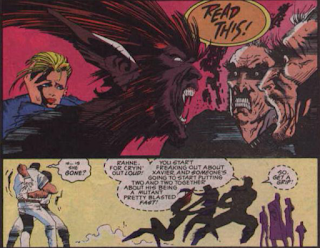 Storm and Havok meet and quickly take charge of the situation together; it goes unstated, but I was reminded that the pair actually have a fairly substantial history together, from their time together on the post-Mutant Massacre, pre-Dissolution X-Men (remember when Havok "killed" Storm?).

It's noted that the group of people who beat the X-Patriot Taylor outside the museum last issue have been rounded up. 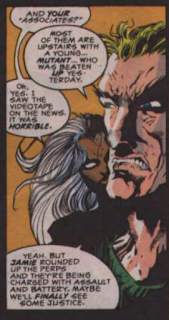 Investigating the scene of the concert, Wolfsbane declares that while she's not detecting Cable's scent, there is something familiar, which is a nice acknowledgement of her New Mutants past (she worked with Cable, so she knows his scent, but also fought Stryfe, so his would be familiar as well). 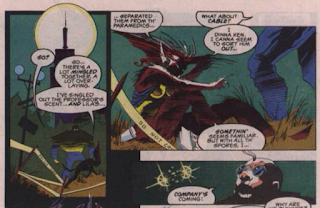 Wolfsbane is excited to learn Cannonball isn't dead, after Sauron gloated about killing him to her in X-Factor #82.

X-Factor's flying car makes an appearance in this issue. 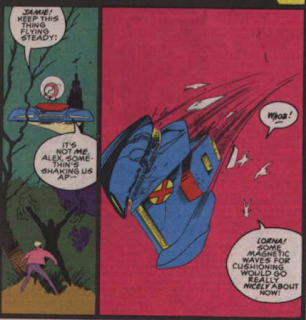 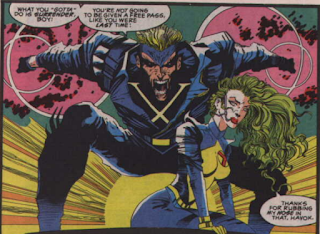 When Madrox enters the fray, Boom-Boom is dismayed, a reference to their time spent together in Fallen Angels (that series will actually get referenced a few times in this story, leading young me to believe it was a much bigger deal than it actually was). 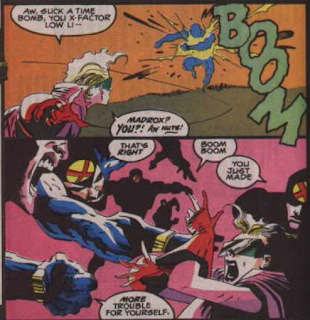 Pun with Peter
When Havok asks after Polaris and calls her sweetheart, Strong Guy does the whole "respond when he was clearly talking to Polaris" gag. 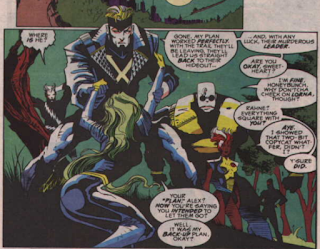 When the X-Men arrive and Beast declares they're going to help get Cable, Strong Guy makes the requisite joke about cable TV. 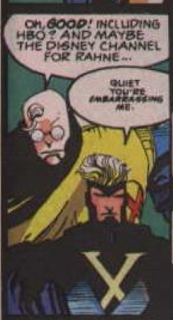 The Awesome and Terrible Power of Cyclops Archangel
Archangel, with a big gaping hole in his wing where it was shot by "Cable", does a whole "rage at the full moon" routine, angry that Apocalypse's tech failed him when he tried to stop Cable, and declaring his intent to kill Apocalypse (despite the fact that, as far as the X-Men are concerned - and Cyclops' reminded us in Uncanny X-Men #294 - Apocalypse is dead at this point). 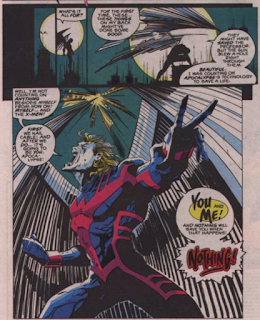 Human/Mutant Relations
Quicksilver, Polaris, Prodigal and Lukas briefly discuss human/mutant relations, with Prodigal getting off a great line about how humanity's brutality towards mutants is acceptable because it is equitable (ie human hurt other humans who are different too). 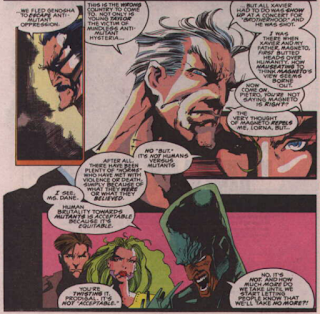 Young Love
It's heavily implied that Guido and Jo Beth were knocking boots while the Xavier attack went down, which doesn't quite gel with the timeline shown in Uncanny X-Men #294 (in which Strong Guy was watching the concert and presumably saw Xavier get shot). 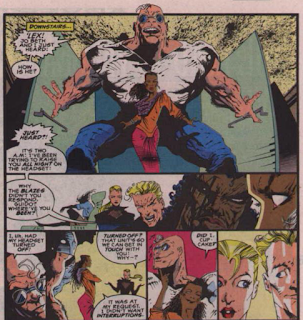 Rictor and Wolfsbane, who haven't seen each other since the latter remained in Genosha after "X-Tinction Agenda" and the former left the New Mutants to convince her to come back, but apparently got waylaid and ended up joining Weapon: Prime before throwing in with X-Force, enjoy a brief reunion. Rictor is then later sour when he learns about Wolfsbane being hung up on Havok.

Austin's Analysis
Peter David has said he left this series due to his frustrations with having his book-specific narrative interrupted in order to serve "X-Cutioner's Song", but to his credit, for this issue, at least, he manages to integrate that larger story into his own book while still keeping his characters in the spotlight. With Xavier seemingly shot by X-Force's leader, it makes sense, both in-universe and thematically, for X-Factor to be the first group to confront X-Force. X-Factor is the officially sanctioned team, and X-Force is the most explicitly-outlawed team (mostly due to their association with Cable, who at this point is still technically wanted by SHIELD, if nothing else).

Plus, Rahne's presence on X-Factor gives this encounter some personal stakes that would be mostly absent if, say, the X-Men Blue team was the first to confront X-Factor, and it allows for a much appreciated New Mutants reunion. As a result, this still reads like an issue of Peter David's X-Factor, even as the events of the crossover swirl around it, and the interactions between Rahne and her former teammates keeps the whole thing from just being a pointless slugfest, serving character as well as plot. It may not do much to move the X-Patriots storyline along, and it's going to get much worse for David in terms of interrupting his own book, but for now, this still reasonably reads like an issue of X-Factor while also functioning as the second part of larger crossover narrative.


Next Issue
Tomorrow, a trip down Wolverine's memory lane in Wolverine #63. Next week, another villain and another new artist make their entrances in X-Men #14, and X-Force fights the combined X-Men and X-Factor in X-Force #16.