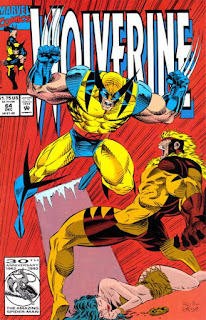 In a Nutshell
Shiva arrives as Psi Borg continues to manipulate the former Weapon X members.

Plot
Wolverine, Sabretooth, Maverick & Wraith proceed to destroy Ferro's computer equipment, attempting to draw him out. Their efforts succeed, and Ferro appears in his full Psi Borg guise. He separates Wolverine from the group, telling him he's the prize he's been after. He shows Wolverine the memory of Silver Fox being killed by Sabretooth, and Wolverine learns that Sabretooth didn't kill her, though she did knock out one of Sabretooth's teeth. Psi Borg realizes Wolverine's mental pain is the key to the age suppression factor they all share, and forces Sabretooth to attack Silver Fox. Upstairs, Shiva appears, and asks Jubilee where Vole is. Jubilee proceeds to kick Shiva over the edge, where it lands on Psi Borg. Free of his control, Sabretooth attacks Psi Borg, who once again turns into a tree and consumes him, leaving behind only a twig and a pod, which contains a tooth.

Firsts and Other Notables
Mark Pacella, fresh off a stint stinking things up on X-Force and X-Factor, fills in for Mark Texeira. A swipe-prone artist, this image of Sabretooth, lifted from X-Men #7, particularly stands out (I'm sure there's more). 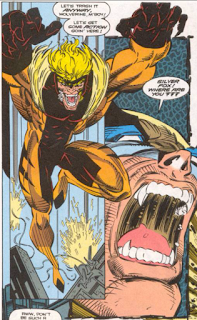 Shiva pops up in this issue as well, still trying (and failing) to kill members of the Weapon X project. It has progressed down its list to the point that it's now after Vole (Ferro/Psi Borg). 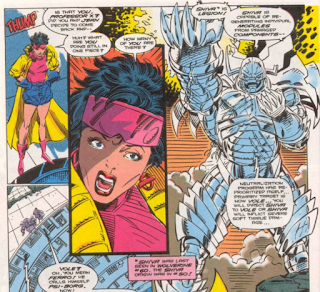 A Work in Progress
This issue shows us Psi Borg's true form, not masked by telepathic illusions, which is basically that he's a robot at this point. 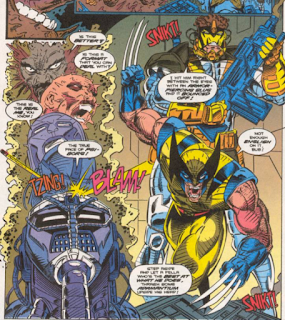 Psi Bog notes that he implanted just the bad stuff into the minds of the Weapon X members, suggesting a possible path towards determining what's a real memory and what's a fake (in that, if Wolverine has a good memory, it's probably genuine), though I doubt any future writer has stuck to this idea too closely. It does confirm that at least the "Wolverine & Silver Fox were in love" portions of the flashback first introduced in issue #10 was true, and not an implant, and that Silver Fox' apparent resurrection in the present is due to the fact that she wasn't actually killed at that time. 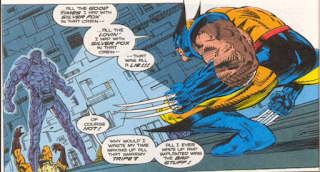 Jubilee manages to kick Shiva down the hole leading to Ferro's computer complex which, good for her, but seems like the kind of thing Shiva should be able to guard against. 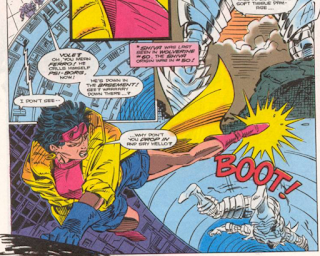 Pun with Peter Larry
When talking with the Professor X who is an illusion created by Psi Borg, Jubilee asks him to "psi hello" to Wolverine.

Austin's Analysis
The best thing this deep dive into Wolverine's past and the Weapon X project had going for it was Mark Texeira's art, which has generally soared when depicting the various hallucinations and reality-bending the story has called for, and has injected a fair amount of energy into a tale that is, essentially, a lot of talking and/or running around smashing stuff. Take that away, and the story as a whole loses something. Replace it with Mark Pacella's art, and the whole thing becomes a complete waste of time. Even Hama seems off his game here, with Wolverine's voice sounding wrong in several places, and this issue essentially repeating the cliffhanger of the previous one, with a former Weapon Xer being eaten by a tree representing Psi-Borg. That "man-eating tree" was used as a cliffhanger in this story once is kind of bonkers. That it was used a second time, consecutively, is even stranger.