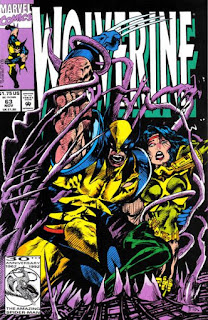 In a Nutshell
The former Weapon Xers battle Aldo Ferro aka Psi-Borg.

Plot
With Maverick standing between Ferro and Wolverine & his allies, Ferro uses his telepathic abilities to manipulate everyone's minds, revealing that the Weapon X project's Professor hired him to use his psionic abilities to link the memories and pain receptors of the project participants together, and create new false memories without the need for staged sets. Carol Hines interrupts his attack, and Ferro kills her before disappearing. As Maverick & Wraith discover a hidden facility beneath the floor, at the X-Mansion, Professor X and Jean Grey suddenly detect a surge of psi-talent. At Ferro's complex Jubilee is left behind as the rest of the former Weapon X teammates descend into the hidden facility, hoping to find Ferro and get their minds straightened out. But they encounter only more hallucinations, and Silver Fox is seemingly killed again, much to Wolverine's dismay, with Maverick declaring that Ferro is still playing them, and could even be using his abilities to masquerade as one of them. Up above, Jubilee is seemingly joined by Xavier & Jean, but they are not who they appear to be.

Firsts and Other Notables
This issue reveals that Ferro, a telepath, is responsible for much of Wolverine's altered memory and implants, having picked up where the Weapon X project left off with its sets and staged memories (as seen in issues #48-50) to reach the same effect via telepathy. 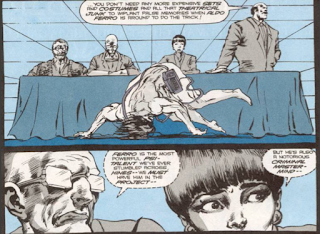 Ferro is also revealed to have cybernetic parts, responsible for his lack of aging, and takes the name *snicker* Psi-Borg. 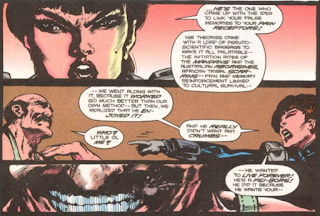 Jean Grey and Professor X appear briefly in this issue, when Cerebro suddenly detects Psi-Borg. Jean receives a pretty gratuitous "back to the audience, butt sticking out" pose. 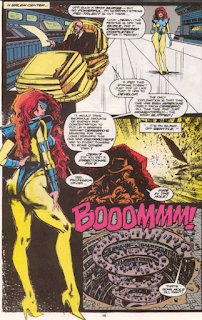 During one of Ferro's psychic attacks, Hama seems to once again raise the question of whether Sabretooth is Wolverine's father. Which is odd, since he seemed to go out of his way to put the issue to bed in issue #42. Obviously, anything in comics can be changed/retconned, but it seems odd that Hama himself would want to reopen that can of worms.

Wolverine also has a lot of questions about Wraith, like why he doesn't pop when he teleports like Nightcrawler (which seems odd, since Wolverine has encountered other forms of teleportation), and why he didn't show up on Cerebro (not sure if he means generally, or is referencing something specific, but at this point, lots of mutants who probably should have, haven't been detected by Cerebro).

The Chronology Corner
As this story takes place well before events in contemporaneous issues of other X-books, Xavier appears here between Uncanny X-Men #286 and X-Men Annual #1, with Jean Grey appearing between Uncanny #286 and #287.

A Work in Progress
Maverick's full name of David North is given in this issue.

We return once again to the spiky painscape of Wolverine's mind, with Ferro explaining how he tied his memory implants to pain, represented by the thorny spikes. 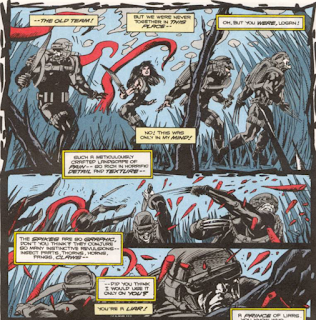 When not allowed to follow Ferro deeper into his complex, Jubilee complains, saying that she's gone up against the Mandarin, a reference to Uncanny X-Men #256-258.

The Best There is at What He Does
It's said that the Professor (of the Weapon X project) believed that Wolverine was capable of sensory awareness on a cellular level, which could be read as a slight justification for the later, ridiculous, "Wolverine is resurrected from a drop of blood" scenario. 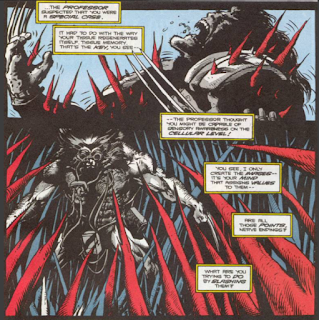 Young Love
Wolverine notes that he's still not over Mariko's death, an appreciated reminder of her recent death.

Austin's Analysis
This issue is, essentially, The Origin of Wolverine's Memory Implants, and that's fine, I guess. Certainly, hallucinations and visual representations of thought play more to Texeira's strengths at this point (especially with his Wolverine still annoyingly off-model in terms of coming across taller and leaner than he should), giving him some fun surrealistic stuff to draw. Ferro is hardly the most memorable of villains (despite the numerous returns to stories featuring Wolverine's past in the years ahead, it's no surprise he barely makes an appearance outside of this story; "Psi-Borg" is especially laughable, even for the 90s), but he works well enough as a vehicle for further exploration of Wolverine's past, and having a telepath involved in Wolverine's memory issues makes sense, both from a logistical stand point, and in terms of an explanation for why Professor X has never been terribly good at untangling Wolverine's memories. Squint, and you might even be able to see some thematic connection to Wolverine having his head messed with by one telepath, only to end up fighting in the name of another. But Hama doesn't seem too interested in those kinds of explorations; it's the further exploration of Wolverine's past, and the art from Texeira (however off model) that continues to carry this story.