The Walking Dead 7x07: Sing Me A Song 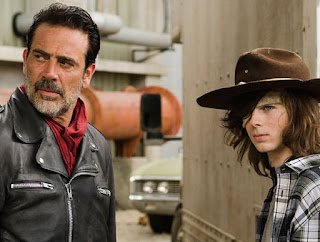 Nobody wants to have a target on their back. There's a reason a lot of people like to be the person behind the person of power. *cough* Steve Bannon *cough*. There's power and safety being the one who influences from within the shadows.

Sure, Negan, if you want to be the one in charge then I get that. But if you're going to paint a target on your back at least be smart of it!

I get it. It's always a bold display of a villain's power and authority to give their victim with plenty of motive an opportunity to kill them but ultimately have the their victims hand stayed. That shows "true power."

However, I feel like Negan is just being reckless. It makes me wonder if he's sly like a fox or stupid like a Rick. I know they established that Negan's army is just too big to fight against (and they can teleport too!) but that's a reason to not fear Rick or other leaders in a community getting overzealous.

But when Negan strolls into Alexandria without any guards, without any defense, then it's not the leaders you have to worry about. It's the individual crazies. Negan is abusing and pissing off a good many people. All you need is one whose pissed off and nihilistic enough to just kill him, regardless of the repercussions.

I was similarly bothered when he was walking around with Carl. Carl already went on a suicide mission to kill Negan and Negan responds by standing over a balcony with his back towards Carl. Sure, Carl got to see everyone kneel before Negan but I half expected Carl to push Negan over the railing. I'm still kind of pissed that he didn't! And it's also odd that Negan assumed Carl wouldn't. I feel like teenagers can be the most likely people to martyr themselves with delusions of grandeur which is specifically evidenced by the aforementioned suicide mission Carl embarked on!

This episode didn't show us how powerful Negan was. It showed how stupid he was.

Other Thoughts:
Ah...so the burning pile Michonne found was the mattresses the Saviors stole from Alexandria.

At first I was thinking that Michonne was faking her own death. Instead she was...trying to kidnap a Savior? Not sure what the point was of leaving her sword in the road for a brief period of time.

I dunno, I feel like Jesus and Carl would be found in the truck by the drivers. They were making a lot of noise.

Why did the Saviors hold their fire after Carl open fired on them? I mean, he was out in the open, they could've offed him easily.

I don't like neutered Daryl. I know, I know, that's the point.

A lot confused me about the scenes with Spencer and Gabriel. Like what they were doing and why was a zombie was hanging above them.

So who slipped Daryl the key? Jesus? Or, possibly, Dwight?

I thought when, a while back, Negan told Dwight he could sleep with any woman he wanted provided they consented they were going to try to have Negan have some sort of odd "respect women" code. (Odd for Negan, not regular, moral people.) But with his multiple wives and how he treats them and his interaction with Olivia I see that he's your typical slime-ball sexual abuser.

I suppose this show listened to me. We bounced back-and-forth from a few locations this episode!
Newer Post Older Post Home
Posted by Dr. Bitz at 1:50 AM