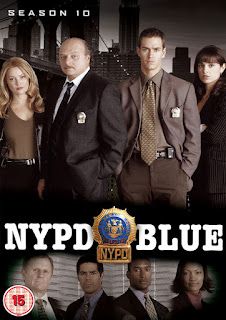 Season Ten, and the show still has over forty episodes to go.  Honestly, I'm not sure who was even running the series at this point.  Reports had Steven Bochco moving away from his daily duties on the show, which I suppose left Mark Tinker as the man in charge.  Matt Olmstead and Nicholas Wootton also have co-executive producer credits, so perhaps they were the daily showrunners.  Nicholas Wootton has been a writer on the show for years, and his scripts tend to stand out as the strongest ones of the year.  Matt Olmstead, conversely, tends to write lighter episodes, and his name is on the script with the horrendous Grease seduction scene from last year, so I'm probably carrying at least a slight bias towards his work...

The cast this year consists of...

Dennis Franz as Andy Sipowicz
One of the reasons I maintained interest in the show over the course of so many years was just to see how exactly the character of Andy Sipowicz could be dragged through one more season.  The idea of giving Andy a horrible loss, or the threat of one, each year ended when David Milch departed the show.  The thrust in the later seasons is more about Andy facing some aspect of his past each year, and proving to himself in some way that he's not that person we met in the first episode.

This year, Andy and Connie have moved in, they're in the process of adopting her infant niece, and then suddenly a custody challenge from Connie's in-laws puts a legitimate threat to the adoption.  Their main weapon in the case is Andy's past as an alcoholic, which gives Dennis Franz some of the thoughtful, introspective material he's so adept at playing.  The episodes prior to this have him adjusting to his new life with Connie, Theo, and the new baby all in the same apartment.  I've come to the conclusion that Andy and Connie aren't particularly believable as a romantic couple, even though the previous year was spent selling the concept, but I love watching them bicker for a few episodes.

Mark-Paul Gosselaar as John Clark, Jr.
Andy doesn't face the heart-wrenching emotional crisis this year -- his younger partner John Clark, Jr. is given that material this season.  Mark-Paul Gosselaar is a welcome addition to the show, and entertaining in pretty much every scene he's in, but his strength does tend to lie in either being friendly, charming, or funny.  Deep drama doesn't seem to be his forte.  Maybe the producers realized this, and that's why Clark's response to his father's tragedy is glossed over as soon as it happens.  I realize that we're supposed to think in his first episode back that Clark's in denial and suppressing some heavy emotions, but absolutely nothing comes of this.  Within two episodes, Clark's hitting on cute female doctors and just acting like his old self again.  It's a major disappointment as a character arc, if you can even call it that.

Charlotte Ross as Connie McDowell
Still not officially the third lead on the credits, but clearly the third lead if you're paying attention. Ross has a quote on her website from a critic who proclaims that she would've surely won an Emmy this year, had people still been paying attention to Blue. This season, Connie tries to rescue her sister from her abusive husband, loses her just when she thinks things are going to be okay, and takes in the baby daughter her sister left behind.  In the process, Andy and his son Theo move in with her, nominally to make her life easier, but I have no idea how that was supposed to work.

Unfortunately, this is the year the Andy/Connie romance just fizzled.  One reason might be the lack of scenes between Connie and Theo; Connie's love of Theo is why she bonded with Andy in the first place, but there are literally zero Connie/Theo scenes this year (outside of, uh, the one that's all over the internet...).  And when Connie discovers that Theo is having an emotional crisis after being forced to move into her apartment, and compete with a newborn for attention, Connie doesn't seem to care in the slightest.  I realize that part of the appeal of Connie is just how no-nonsense she can be, but this doesn't come across as an intentional plot point, just negligent writing.

The scenes with Connie at work are still entertaining; Charlotte Ross is possibly the most convincing TV-pretty cop I could name, but her personal life subplots this year are lacking.  As I mentioned earlier, it's fun when Connie and Andy are fighting for a few episodes (and I imagine that two short-tempered, acerbic cops would probably be shooting constant barbs to each other), but the romance this year is just not believable.  The producers probably should've just been honest about this and established that their relationship is based on factors outside of physical desire, instead of half-heartedly inserting the occasional "intimate" moment between the two.

Jacqueline Obradors as Rita Ortiz
Rita is given a bit more to do this year, although not much of an effort is made to truly flesh out her personality.  Fans were speculating that the actress would be cut from the show, given that her character and Clark stop dating, which would seem to be the main reason for her being there in the first place.  Rita sticks around, though, working cases and having half-way decent chemistry with her partner, Connie.  The season finale was likely playing into fan speculation that her character would be cut when she hands in a transfer request to the boss just five minutes before the episode is over.  Instead, there's a pretty cool twist thrown in during the final seconds.

Rita does display more personality in the premiere, standing up to Clark when she knows he's lying about why his name was found in a prostitute's date book.  Her voice even sounds deeper, which was possibly a response to internet complaints.  Jacqueline Obradors isn't able to lower her voice all year, however, but it's entertaining to watch her get angry and fight with Clark early in the season.  Like Andy/Connie, this couple is more entertaining when they're at odds.

And now I'll revive my two-sentence challenge to cover the supporting characters...

Gordon Clapp as Greg Medavoy
"Death by Cycle" features the rare Medavoy plot, when he's hit over the head with a chair in an interview room, and the suspect escapes (Sipowicz's response is hilarious).  It's a decent Medavoy moment that doesn't make him look buffoonish...although Medavoy's back as the butt of the joke in the final few episodes of the year, sadly.

Henry Simmons as Baldwin Jones
Baldwin has a few potentially interesting stories this year, like when he inadvertently shoots a fourteen-year-old boy through a wall, but they just seem squandered.  Most of the Baldwin-specific plots are excuses for him to reunite with Valerie, in response to likely no demand whatsoever.

Garcelle Beauvais as ADA Valerie Haywood
The producers try so hard to make Valerie a part of the clique (having her pop up whenever the story is contrived to work in a group shot of the cast, for example), but nothing quite works.  She's not terrible, just superfluous to the series.

Bill Brochtrup as PAA John Irvin
There's more of an effort to work John Irvin into the stories, either by having him offer some insight that the detectives wouldn't normally have, giving him a humorous subplot, or re-establishing his bond with Andy and Theo.  He's still here mostly to play Greek Chorus, but he's less in the background this year.

Esai Morales as Lt. Tony Rodriguez
Rumors were going around that Esai Morales felt that he was being underused on the series and wanted out; this amuses me, since the producers went out of their way to insert this Lieutenant into the action, but ended up with the same complaints.  Tony's given a subplot involving his drug addict wife that had great potential, but like many of the storylines this year, amounted to nothing.

As for the guest stars... 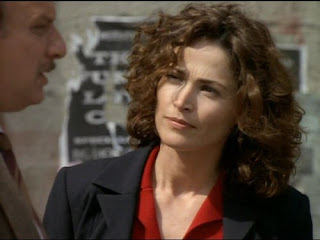 Kim Delaney as Det. Diane Russell
Diane's back!  It's only for one episode, but it's one of Kim Delaney's strongest performances during her entire stint on the series.  We learn this year that Diane Russell is still "on the job," only now working in the Special Victims Unit.  Andy and Connie think that she might be able to help them in their custody case (based on their assumption that Connie's sister's father-in-law molested his daughter), given her own history of abuse and addiction.  I wish the series saw more returns of former cast members, but it seems Kim Delaney was given special consideration in that regard.  We even see a glimpse of Diane's new workplace, although it's only for a few seconds.  It's one of the more believable sets the show's created, actually.  It looks just as detailed and realistic as the 15th squad (which was created by using actual photos of Bill Clark's precinct, circa 1993.) 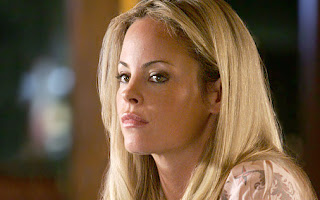 Chandra West as Dr. Jennifer Devlin
Chandra West is likely the most blatant example of the producers casting a typically Hollywood-pretty actor for a role that could've easily gone to a more, uh, relatable-looking thespian.  A few years after her stint on Blue, West played a washed-up porn actress on the David Milch series John from Cincinatti...without really changing her look from this show.  (Mark Tinker was also a producer on that series, and he married Chandra West around this time.)  She's actually not a bad actress, there are even moments when she holds her own against her established castmates, but she is a participant in my third contender for Worst Scene in Blue History...which I'll cover in the next installment.
Newer Post Older Post Home
Posted by G. Kendall at 4:07 PM