The Walking Dead 7x03: The Cell 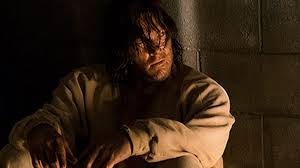 Hey, it's a Daryl episode! Usually that's a good thing. In this case, it's merely not a bad thing. It was an alright episode but it was just as much about Dwight as it was about Daryl. Dwight does not do a whole lot for me.

Even though I'm not a big fan of Dwight's, I will say that this episode answered a lot of questions I had about Dwight in his first appearance. His escape from the Saviors, double-cross of Daryl and subsequent return to the Saviors seemed very odd to me. The fact that the catalyst to Dwight's change of heart was Tina's death is probably something I should've figured out on my own. However, it still doesn't make complete sense to me.

Tina's death had nothing to do with the Saviors or them fleeing the Saviors. And, frankly, her death makes fleeing easier since they don't have to worry about the insulin. Wouldn't it had made more sense if they lost the insulin so then they had to return to the Saviors in order to get more?

It still feels like Dwight's behavior was motivated more by plot necessity than anything else. Still, I guess it's good we got SOME explanation. But...oh well. I can't expect everything.

The other half of this episode was Daryl getting brainwashed. It had all the familiar parts of a brainwashing story. Daryl's locked in a cell, forced to listen to the same song over and over again, he has to eat dog food, they want him to "willingly" pledge his allegiance (in the form of kneeling to Negan in this case), etc. Happily, Daryl is resisting so far. Daryl even has a near escape only to be recaptured. Maybe that was all a part of Negan's plan?

This all leads to Negan giving a grandiose speech about Dwight's flirtation with escaping only to fall back in line under Negan. Then it gets into the weird "everyone is Negan" bit the Saviors do. Negan wants Daryl to say he's Negan because everyone under Negan calls themselves Negan, except Dwight...sometimes? I dunno. All I know is Daryl refuses to join the Saviors for the time being and that makes me happy.

Other Thoughts:
I am forced to wonder how Negan gained his original followers. Did everyone have to endure this brainwashing before they joined?

I'm kind of confused by Negan telling Dwight that, as an reward, he can sleep with any woman he wants as long she consents. So, people can't have sex unless Negan OKs it first?

In this episode it's Dwight that gets swarmed by zombies but somehow, magically, remains unbitten.

I'd call BS on Negan's exposition to Daryl about Dwight's story but I suppose it's a power play in line with Negan's sadistic tendencies. He's both telling Daryl the parable of Dwight's journey and also gets to rub that story in Dwight's face. Two birds.

I was surprised to find out that "Easy Street" is a relatively modern song. It certainly has a retro aesthetic, like most music that has survived the zombie apocalypse.

I could've sworn that Daryl would've knelt by the end of the episode. I'm still not convinced he won't eventually. But if I were him I'd throw away my pride and just do whatever they ask. Why not just play the double agent? Well, until they ask him to do something grotesque...or he gets a chance to kill Negan.
Newer Post Older Post Home
Posted by Dr. Bitz at 1:17 AM